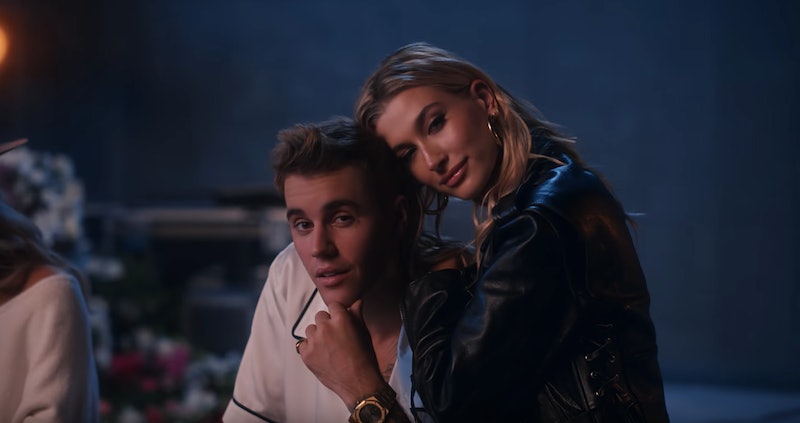 It seems that absolutely everyone loves the viral video of Taylor Swift crying over a banana after getting lasik surgery on her eyes — even the Biebs. Justin Bieber imitated Taylor Swift's post-op video during an Instagram Live broadcast, and many fans are not happy about it. Although it might have been a harmless joke, the video was also bound to create tension, considering the fraught history between the two singers.

On Sunday, Oct. 6, Bieber reportedly went on Instagram Live for a lengthy live-streaming session filmed by his wife Hailey Baldwin. According to Entertainment Tonight, the newlywed just glided around his kitchen on hovershoes during the livestream. But he also made time to mock Swift's now-viral post-surgery video, which Jimmy Fallon played when she appeared on The Tonight Show on Thursday, Oct. 3.

"It's not the banana that I wanted," Bieber screamed in the video, quoting a line from the original clip and imitating Swift's upset tone. "It's not the right banana. It has no head!" His wife Hailey also reportedly chimed in from behind the camera, telling her husband, "That was so funny," although it's not clear if she's referencing the actual clip or her husband's amateur comedy skills. The Instagram Live video has since been deleted from Bieber's page, but it has been reposted by fan accounts on social media.

The original banana video was filmed by Swift's mom as the singer was at home recovering from lasik eye surgery. In the clip, Swift, obviously still under the influence of surgical drugs, got visibly upset over picking the wrong banana to eat. She's then shown pouting and eating the banana in her bed as her mom tells her not to fall asleep, resulting in an all-too-relatable quote: "I'm not asleep. My mind is alive."

Swift had no idea that her mom had filmed this moment, and she was especially surprised that her mother gave it to Fallon to premiere on his show without telling her. "I can't even be mad. I'm just impressed that you infiltrated by family," Swift told the late night host. "I don't even know how you did that! Nobody has my mom's number."

The morning after the singer's Tonight Show appearance, Swift's banana went viral, and while Bieber's video could have just been an example of the singer jumping on a viral trend, it raised some eyebrows because of his past fraught relationship with the singer. In June 2019, Swift wrote an open letter about Bieber's manager Scooter Braun buying her masters. She claimed that she was the victim of "incessant, manipulative bullying" at the hand of Braun, referencing an incident in which Bieber posted a photo of him FaceTiming Braun and Kanye West on Instagram, with the caption "Taylor Swift what up," an implied reference to her conflict with West. The "Sorry" singer apologized for his hurtful words on Instagram after Swift's open letter. "At the time, I thought it was funny, but looking back it was distasteful and insensitive," he wrote, at the time.

Regardless of Bieber's intent, many Swifties are not happy about his mockery of the singer. Some fans took to Twitter to declare that Bieber was "obsessed" with Swift, and others simply chastising him for potentially causing more friction between the two. One fan said that the action was "uncalled for" while another gave Bieber a stern warning in relation to Swift: "Don’t mock her, don’t quote her, don’t mention her name, don’t look at her, don’t breathe in her direction."

Whether Bieber's imitation was good-natured or meant to be another dig, one thing is clear: people simply just can't get enough of Swift's post-surgery meltdown.