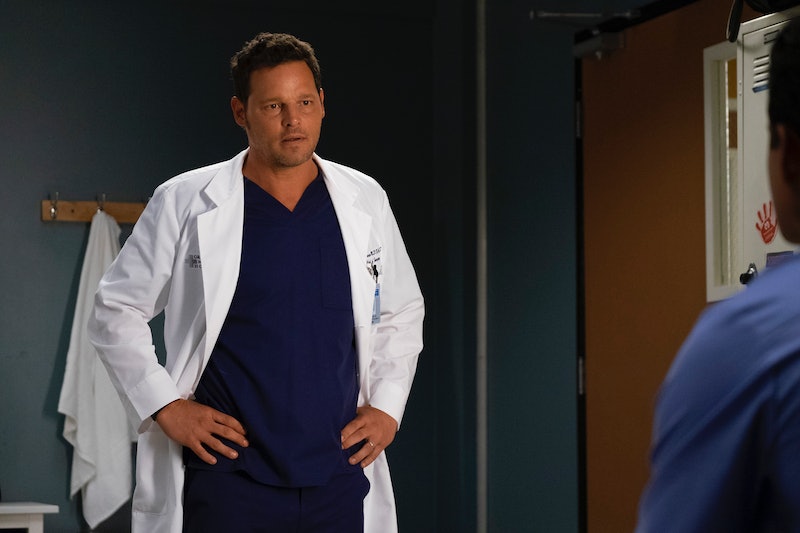 After over a decade of saving lives and winning fans' hearts, one of Grey Sloan Memorial's most famous doctors is stepping down. On Friday, Jan. 10, Deadline reported that Justin Chambers is leaving Grey's Anatomy after 15 years of starring on the ABC medical drama. And, to make matters worse, follow up reports cited sources claiming that Chambers' final episode of Grey's Anatomy has already aired. (Bustle has reached out to a representative of Chambers for comment, as well as ABC.)

"There’s no good time to say goodbye to a show and character that’s defined so much of my life for the past 15 years,” Chambers said in a statement to Deadline, announcing his departure. The actor explained that he decided to leave the show in order to "diversify" his roles and career choices. "And, as I turn 50 and am blessed with my remarkable, supportive wife and five wonderful children, now is that time."

Chambers continued his statement by thanking the show's creator, Shonda Rhimes, and the cast and crew of Grey's Anatomy for all of the opportunities offered to him over the years. "As I move on from Grey’s Anatomy, I want to thank the ABC family, Shonda Rimes, original cast members Ellen Pompeo, Chandra Wilson and James Pickens," Chambers said, before also sharing his gratitude for "the rest of the amazing cast and crew, both past and present, and, of course, the fans for an extraordinary ride."

Alex last appeared in Episode 8, which aired on Nov. 14, testifying at Meredith (Ellen Pompeo)'s trial for insurance fraud in order to help her retain her medical license; he didn't appear at all in the midseason finale on Nov. 21, and was said to have returned home to care for his mother. Both The Hollywood Reporter and TV Line recently reported that Episode 8 was indeed Alex's last episode, and that Chambers wouldn't get a big sendoff episode, though reps for ABC have yet to release any kind of comment or confirmation.

Of course, there's still a chance that Alex could be killed off the show in tragic, Grey's Anatomy style when Season 16 returns. Episode 9 — titled "Let's All Go To the Bar" — ended with a massive cliffhanger in which a car suddenly crashed into the bar where many of the interns were drinking after their shift. Though Alex didn't appear onscreen, it is possible that he could have been at the bar with his fellow doctors or even driving the car that caused the crash, which means that Alex could be dead or mortally wounded when Grey's Anatomy returns on January 23.

Despite being introduced in the series premiere as an arrogant, self-centered intern, Alex has become a fan favorite over the past 16 seasons, thanks to his emotional growth and relationships with Izzy (Katherine Heigl) and Jo. And due to his long-running tenure on the show, many Grey's fans are upset at the possibility of losing another original character, and have been sharing their apprehension on social media since Chambers' statement was first released.

While it's unclear whether or not Grey's Anatomy fans have seen the last of Alex Karev already, the response to Chambers' announcement shows that the character has touched plenty of lives both on and off screen over the past 15 years.

More like this
'Bridgerton' S3 Teases Exciting Social Season For Penelope Featherington
By Bustle
Taylor Swift Fans Sue Ticketmaster For The Eras Tour “Ticket Sale Disaster”
By Jake Viswanath
The First Trailer For 'That '90s Show' Includes So Many Nods To The Original Series
By Jack Irvin, Alyssa Lapid and Grace Wehniainen
Brandon & Serene Reveal The Major Relationship Milestone They Celebrated After 'BiP'
By Kadin Burnett and Grace Wehniainen
Get Even More From Bustle — Sign Up For The Newsletter