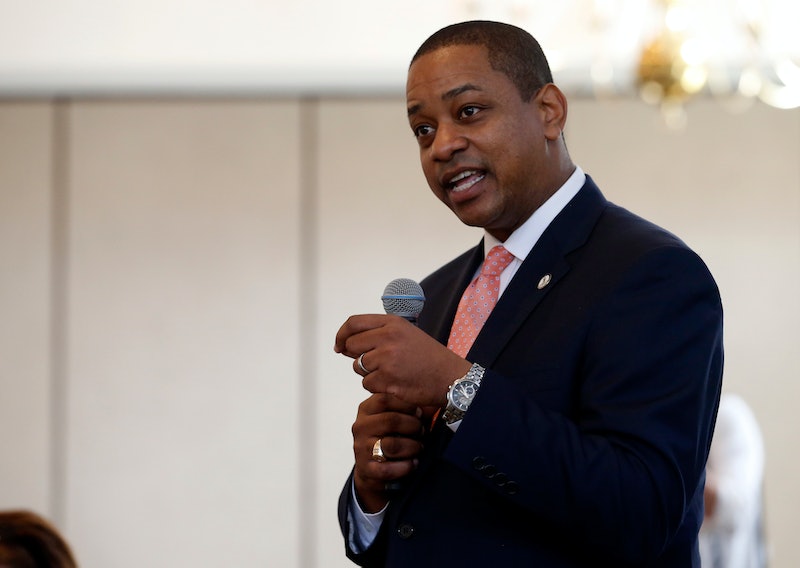 If Virginia Gov. Ralph Northam were to resign, as many inside and outside his party are calling on him to do, someone is already on deck to replace him. Following the line of succession, his lieutenant governor would take over, which would also make Justin Fairfax Virginia's second black governor.

Fairfax is 39 years old, and has been characterized by many news outlets as a promising figure in the Democratic party. He is married and has two children, according to the Times, and attended Duke University. He also holds a law degree from Columbia. He ran for the lieutenant governorship on a platform that included expanding Medicaid and pushing criminal justice reform, according to local reporting from the time.

Fairfax descends from Virginia slaves, according to multiple outlets, and he nodded to that ancestral history during his very first day in office. Specifically, he told NBC News that he kept his "three-greats-ago" grandfather's freedom papers in his breast pocket when he was sworn into office.

In the time since, Fairfax has developed a reputation for publicly and boldly confronting the state's history with slavery and racism. He has made clear that he opposes legislators formally honoring the legacies of Confederate leaders, and has pushed back against those celebrations in his capacity as Lieutenant Governor, according to The Root.

This year, for example, he brought descendents of Confederate leaders to the state's Senate on Stonewall Jackson's birthday, a day when legislators typically take time to honor his legacy. Those descendents, according to The Root, openly oppose revering their ancestors, and in their presence, no state congresspeople suggested adjourning for the usual celebration.

Talk of Fairfax becoming governor recently surfaced after photos from Gov. Northam's 1984 medical school yearbook were made public by the conservative website Big League Politics, including one image wherein two people are seen dressed in racist costumes. One person in the photo is wearing blackface, the other is in KKK robes.

It is not clear from the photos whether or not Northam is in either costume. Initially, Northam said he was "deeply sorry for the decision I made to appear as I did in this photo," according to CNN, which he described as "clearly racist."

But the next day, he denied being in the photo during a news conference. “It was definitely not me,” Northam said, according to The New York Times. “I can tell by looking at it.”

In a statement on Friday, Feb. 2, Fairfax noted Northam's commitment to his work, but condemned his possible and alleged appearance in the photo. "While his career has been marked by service to children, soldier, and constituents, I cannot condone the actions from his past that, at the very least, suggest a comfort with Virginia’s darker history of white supremacy, racial stereotyping, and intimidation," Fairfax said.

Meanwhile, Fairfax himself is also facing allegations that he sexually assaulted a woman in 2004, after meeting her at the Democratic National Convention in Boston, according to the Times. In a statement released on Monday morning, Fairfax's office denied those accusations.

“Tonight, an online publication released a false and unsubstantiated allegation against Lt. Governor Justin Fairfax," the statement read. "Lt. Governor Fairfax has an outstanding and well-earned reputation for treating people with dignity and respect. He has never assaulted anyone — ever— in any way, shape, or form."

Several other outlets, including The Washington Post, have noted in their reports that they'd known of this allegation previously, but had been unable to corroborate the story.

As of Monday afternoon, it remained unclear whether Northam would ultimately concede to those calling for his resignation. For the time being, Northam remains governor of Virginia, and Fairfax the lieutenant governor.