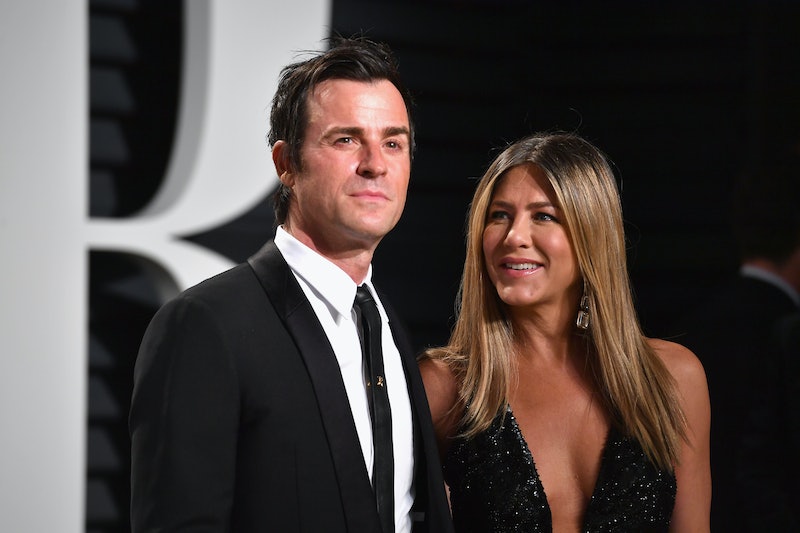 Some Hollywood exes really do get along, as Justin Theroux's sweet birthday message to Jennifer Aniston so beautifully illustrates. The former married couple are coming up on the one-year anniversary of their divorce announcement, but that didn't stop Theroux from sending Aniston warm wishes just in time for her 50th birthday celebration. On Monday, Feb. 11, The Leftovers star wrote on Instagram, "Happy Birthday to this fierce Woman. Fiercely loving. Fiercely kind. ....and fiercely funny." He ended the message with "love you B" — a heart emoji stood in for the word "love."

The picture itself captures all of Aniston's attributes that the actor described perfectly. In it, the Friends star is flexing her muscles while looking super serious as she holds what appears to be bull horns above her head. It's definitely funny and fierce, and the perfect picture to celebrate Aniston with on her special day.

Fans shouldn't be too surprised that these exes remain friends. When they announced their separation on Feb. 15, 2018, they shared a joint statement with Bustle declaring their intent to preserve their friendship. The statement read:

"In an effort to reduce any further speculation, we have decided to announce our separation. This decision was mutual and lovingly made at the end of last year. We are two best friends who have decided to part ways as a couple, but look forward to continuing our cherished friendship. Normally we would do this privately, but given that the gossip industry cannot resist an opportunity to speculate and invent, we wanted to convey the truth directly. Whatever else is printed about us that is not directly from us, is someone else's fictional narrative. Above all, we are determined to maintain the deep respect and love that we have for one another."

One year later, and it seems the pair have done just that.

Feb. 11 is Aniston's official birthday, but the actor had a star-studded bash over the weekend. It doesn't look like Theroux was there, but lots of Aniston's other pals were including Courteney Cox, Lisa Kudrow, Reese Witherspoon, and Laura Dern, as reported by BuzzFeed. Brad Pitt was also there, which caused a bit of a stir since they haven't been seen together since their 2005 split, according to E!. However, the two have been in contact with each other since then and are reportedly on friendly terms.

A source told E!, "Someone extended the invitation to Brad to come to Jen's party and he accepted. He wanted to support Jen and it was a momentous occasion. But that's the extent of it. It was a social evening with a lot of people who have been a part of her life. They definitely aren't dating or on that path. They are friendly, but that's it."

Basically, Aniston seems to be the queen of maintaining positive relationships with her ex-husbands. But then again, Aniston is the queen of lots of things. As Theroux's post pointed out, she's a fierce woman, and it seems even her exes realize how amazing it is to have her as a part of their lives.