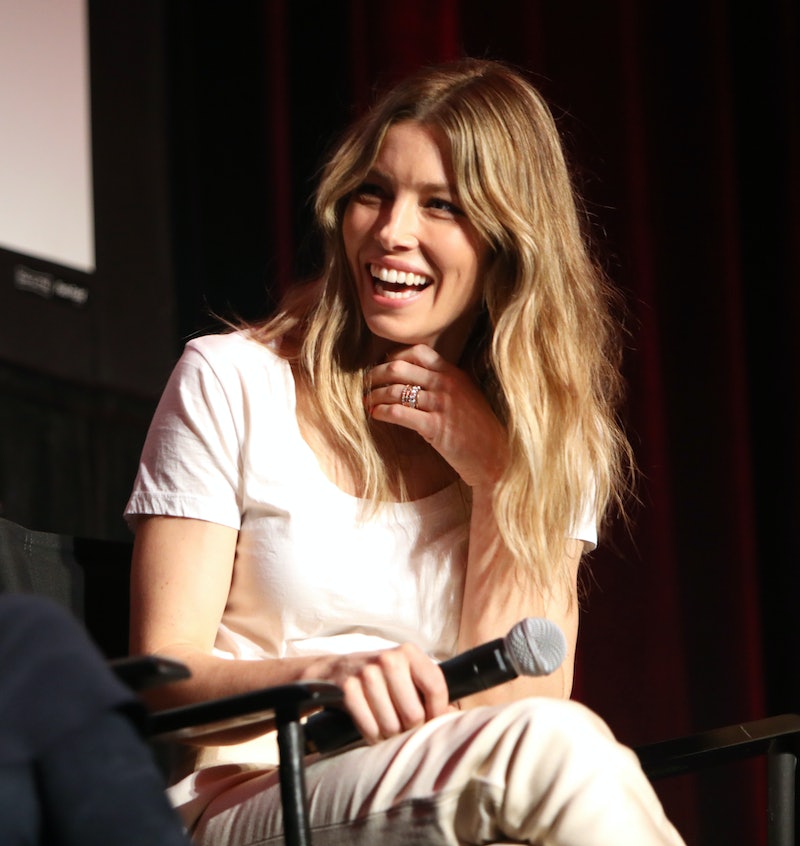 Silas Randall Timberlake is only three, but he already knows how to respect a woman. No, really. As she tells me at LA's 2018 Makers Conference in February, Jessica Biel is parenting her son with husband Justin Timberlake with a no-BS policy when it comes to treating women as equals. As someone who works both in front of the camera and behind-the-scenes in Hollywood, Biel knows she has to walk the walk in tolerating zero misconduct between men and women, and that all starts with her toddler son.

"All the time I talk to [Silas] about, ‘You can’t speak to me that way. You’re being very disrespectful. And I’m not disrespecting you, I’m asking you…’" explains Biel. "We have these kinds of conversations. He’s only three. But you know what? He’s gonna hear these words, and [kids] run all over you if you don’t stop and put a limit and a boundary around things. I’m not overly aggressive with him — I just say, ‘You don’t speak to me that way, that is totally disrespectful and that is not appropriate and we don’t roll like that in this house.'"

The actor adds that watching the Time's Up and #MeToo movements unfold around her has made her adamant about molding her son's mindset and behavior. "It kind of has permeated everywhere, into my personal life, into my work life," Biel says. She's hopeful that conditioning her son to practice this mindset as a toddler will only allow him to become a stand-up man in the future.

"He’s gonna hear my words and he’s gonna remember that and he’s not going to treat — this young man is going to respect his mother," the 35-year-old says. Biel adds that for many men, their relationship with the most significant female figure in their lives is where their future behavior towards women stems from. "If young men respect their mothers, and their mothers put boundaries, that changes who they are when they become older. You have to do it super early on," the actor says. And even little Silas is walking the walk. "He’ll come back to me and go, ‘You don’t respect me!’" Biel says with a laugh. "Not entirely true."

Biel explains that she is working with Saundra Pelletier, the CEO and Executive Director of sex education site Evofem Biosciences, Inc., on Tryst, a platform for sexual education and resources that helps destigmatize taboos around sex (like in this hilarious vagina PSA Biel stars in). And although Silas is still very young, he's what inspires Biel to be part of this project.

"I have a young son, I want him to know [about this]," she tells me. "I want him to understand and have an equal partnership with whoever he chooses and be educated in that way. That motivates me."

Although Time's Up and #MeToo have largely consisted of women joining forces and coming forward about sexual assault, harassment, and unfair pay, Biel wants boys, like her son, to be educated and included in the conversation as well.

"There’s been a lot of really horrible things to come out and there’s been some negative feeling around this thing," she says. "But more than anything, I feel a community binding together talking about women saying, ‘Alright, I’m not gonna be quiet anymore.’ It feels super powerful."

Silas Timberlake may be just a toddler, but there's no doubt that he's already a Time's Up supporter. Hopefully, more women and men around the country are also creating little gender equality advocates in the making to help mold a healthier and more equal future for everyone.