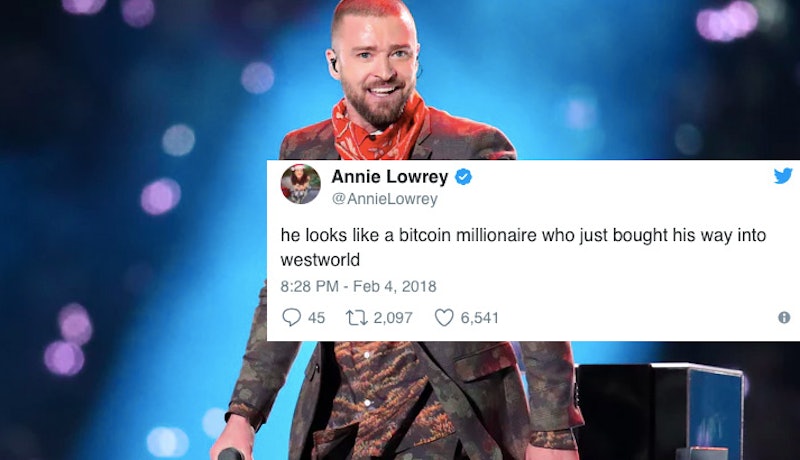 Justin Timberlake has had a busy month. Actually, it's probably more accurate to say that Timberlake has had a busy year — preparing for a Super Bowl Halftime Show requires quite a bit of work. And to release an album within just a few days of the Halftime Show? Well, that's a lot of work that takes a lot of time. Timberlake's Halftime Show outfit was also part of this preparation, of course. But people seemed to have some mixed reactions to the look, designed by Stella McCartney. The base of Timberlake's looks for the evening included camouflage pants paired with a forest-printed button-down shirt, white sneakers with black details, and a red bandana.

According to Vogue, who reported on the look on Feb. 2, the Stella McCartney-designed look actually had a lot more going on than it even looked like on the surface — and it looked like it had a lot going on, trust me.

"Expect a custom-made outfit, with a fringed jacket made of faux nappa leather and trousers with a camouflage-style Prince of Wales print, finished off with a bandana tied around the neck," writer Louis Danielou shared on Vogue. "The designers’ famous environmental focus is as present as ever, with the singer’s shirt made from organic cotton and printed with picturesque countryside scenes from the paintings of British artist Martin Ridley."

The fringed jacket eventually came off during the performance to be replaced by a blazer that matched the camoflage-checked pants. And, well, Twitter had some thoughts. And feelings. A lot of thoughts and feelings, in fact.

While others were just not into it in general.

Some people didn't like the juxtaposition of the look next to Prince, given his stance as a fashion icon in the music world. "Imagine doing a Prince tribute and choosing to do it in an orange bandana," one user tweeted.

Others weren't into it because it was a little too Man In The Woods AKA the singer's newest album namesake. "Justin Timberlake is wearing an outfit you can buy at the Cracker Barrel gift store," on user wrote.

Other people were simply confused, and had some questions about the look. One user tweeted with an Oprah GIF alongside, "Is anyone else confused about Justin Timberlake outfit?"

Other people, however, think that only Timberlake could pull off something like that! "Before anyone tries to pull off that Justin Timberlake outfit, first ask yourself if you're Justin Timberlake. If the answer is "no" then it's not for you," one user wrote.

Some people just wanted to know who designed the look, asking things like, "who is responsible for the Justin Timberlake outfit?" like the user below.

No matter what your feelings are about the look, it goes without saying that the Super Bowl Halftime Show is a time for any artist to experiment with different looks. In 2004, Timberlake made his appearance with baggy khakis, a T-shirt, and a light denim or linen blazer. Cleary, Timberlake's style has been all over the place. In both cases, it seems that the pop star aimed for comfort, which is fair enough given all the dancing and moving around required for halftime performances.

Twitter has something to say about just about everything, but they seem to be particularly passionate about this look — and not necessarily in a good way. But McCartney and Timberlake probably made this outfit decision weeks (maybe even months ago), so it goes without saying that the pop star was probably very into the look himself... and that's really all that matters.