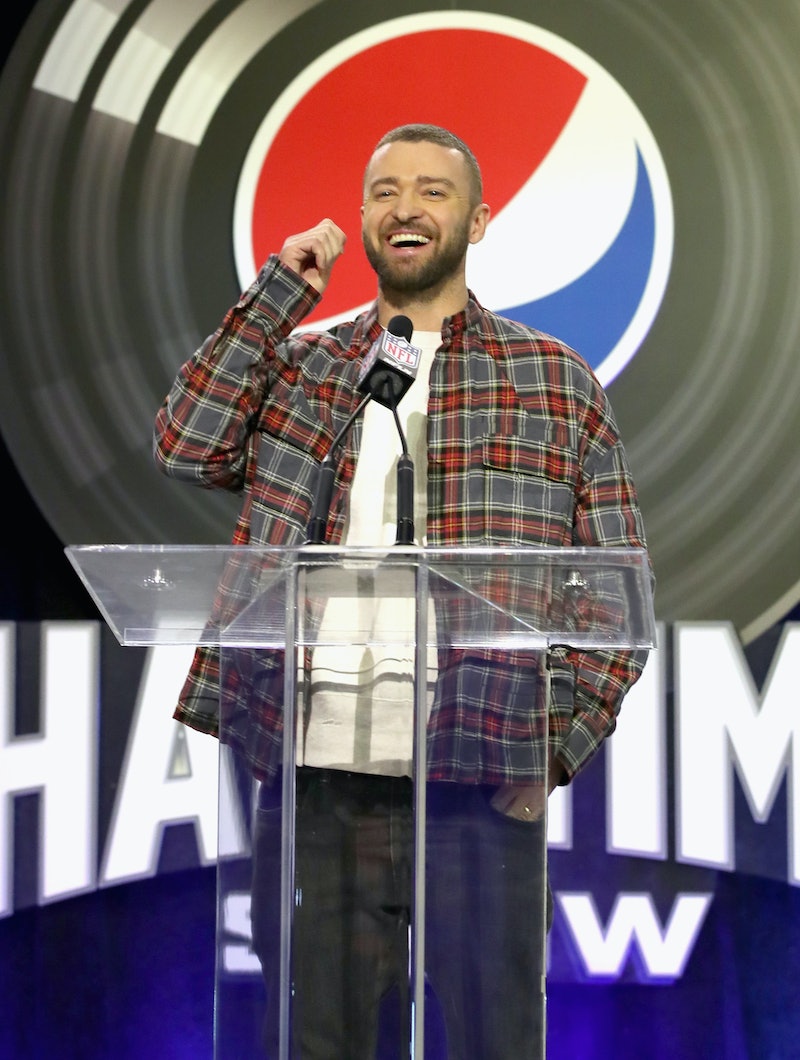 The Super Bowl halftime performance is one of the biggest entertainment events of the year. It's also a huge fashion event, given that at the very least one or two famous performers show up. And with huge performances often come very dramatic outfits. The 2018 Super Bowl Halftime Performance featured Justin Timberlake as the headliner (although more stars were certainly predicted to show up as well). While Timberlake isn't exactly known for his wild fashion sense, this is the Super Bowl Halftime Show we're talking about, so his outfit choices were certainly planned out way ahead of time.

Timberlake started his halftime performance wearing camouflage pants and shirt that seemed to have a desert scene printed on it, sneakers, and a leather jacket — complete with fringe. He also rocked a bandana, because why not? It makes sense that Timberlake would keep things simple given his most recent videos and performances — most of which feature super casual ensembles as well. There's even a song on Timberlake's newly released album Man In The Woods called "Flannel." It makes sense that Timberlake would want to stay comfortable given his dance skills and the fact that the Super Bowl Halftime Show usually includes at least a few surprises and tricks that involve a whole lot of movement (and sometimes even acrobatics — looking at you, Lady Gaga).

The last time Timberlake performed at the Super Bowl Halftime Show was in 2004 when he made an appearance in a Janet Jackson performance. While Timberlake's outfit isn't what you remember of the performance most likely (this was the show with the infamous "wardrobe malfunction"), he also opted for something comfortable, wearing baggy khakis and a T-shirt with a casual blazer layered over the top.

This year, while performing both new and old songs, Timberlake showed that he's not in the same place he was in in 2004. Timberlake's career, music, and life has evolved in the last 14 years, so it's no surprise that his outfit choices are a little different.

Timberlake has been doing press for the Halftime Show as well as his new album, which dropped on Feb. 2 for months now, so the entire performance has been awaited for months by fans and media alike.

In interviews leading up to the big performance, Timberlake had, indeed, been wearing flannel, echoing that same song on his new album. Much of the songs on the album center around the same themes — "Livin' Off The Land," "Breeze Off The Pond," and "Montana" are just some of the other tracks on the newly released album.

The 2018 Super Bowl Halftime Performance outfit, designed by Stella McCartney, according to Vogue, is, of course a totally custom look. The entire outfit was environmentally friendly, too. So that fringed leather jacket — not actually leather.

"Expect a custom-made outfit, with a fringed jacket made of faux nappa leather and trousers with a camouflage-style Prince of Wales print, finished off with a bandana tied around the neck," writer Louis Danielou shared on Vogue. "The designers’ famous environmental focus is as present as ever, with the singer’s shirt made from organic cotton and printed with picturesque countryside scenes from the paintings of British artist Martin Ridley."

There you have it — Man Of The Woods wearing "countryside scenes." Makes sense, right? In any case, the entire look works and looks comfortable as heck, and given that many Timberlake fans are expecting to see a whole lot of dancing, it all makes a lot of sense.