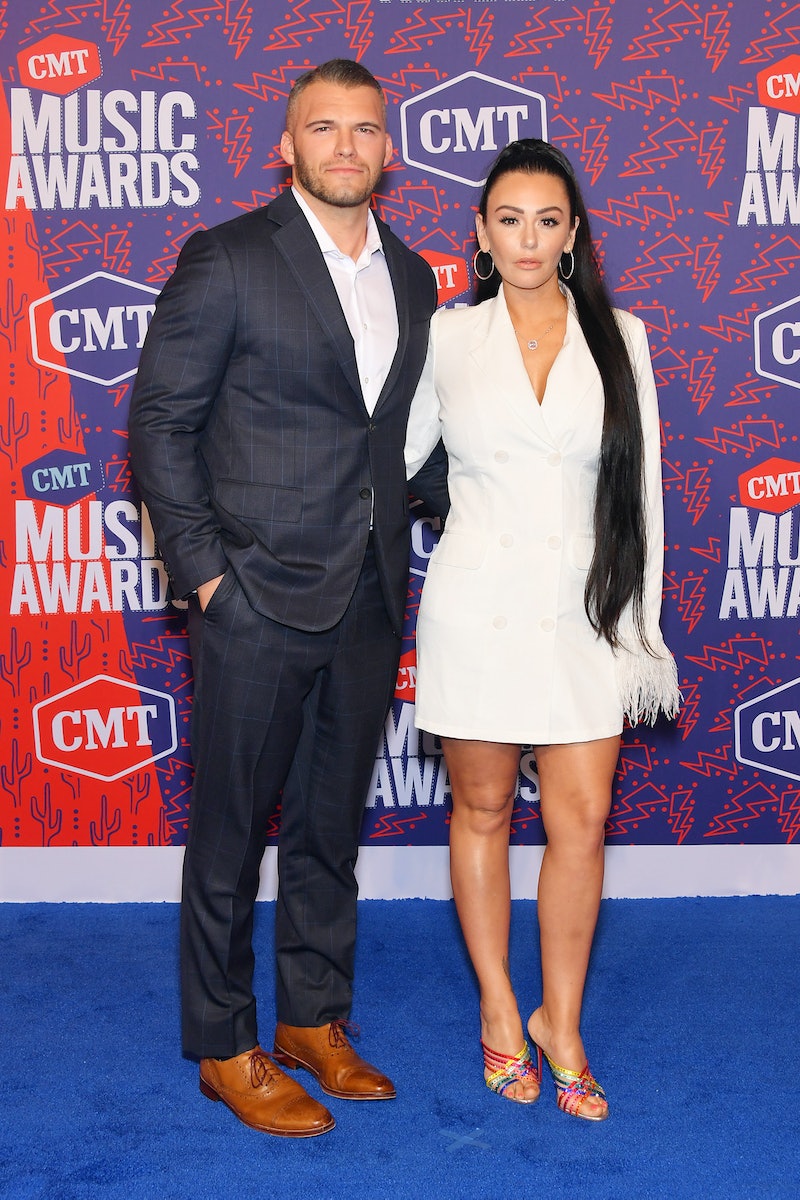 As reported by E!, JWoww filed for divorce from Mathews in September 2018 after three years of marriage, citing irreconcilable differences. In April 2019, People confirmed she's now dating Carpinello, a 24-year-old pro wrestler. And he seems to be great with her young kids already. JWoww told Entertainment Tonight that her children, Meilani and Greyson, have known Carpinello as a friend of the family for quite some time, as he's the brother of one of her longtime friends. She said that kind of familiarity ensured they didn't have an "awkward transition" while adjusting to their mom dating someone new, and TBH, Carpinello seems just as excited about the kids as she does.

"I've spent a lot of time with the kids," Carpinello told Entertainment Tonight in the same piece. "I've known Meilani for a few years. She's known me for a couple years, she is great with me. I love the kids. They're great."

He and JWoww have already made their red carpet debut together, too:

Here's what else you should know about Carpinello.

Though Carpinello hasn't yet made it to the WWE, according to his hometown paper, Bethlehem, New York's Spotlight News, he's wrestled in New York City in the Spanish leagues Consejo Mundial de Lucha Libre (CMLL) and Lucha Libre AAA Worldwide (AAA). He goes by his middle name, Clayton, in the ring.

He Has Snooki's Stamp Of Approval

"Jenni has been going through some sh*t, but I've never seen this girl more happier and more herself than this moment right now," Nicole "Snooki" Polizzi said on her podcast of JWoww and Carpinello's relationship, per Us Weekly.

Carpinello's Instagram is filled with photos of his family. If he's already a family man, that's probably perfect for JWoww.

He Loves To Hang Out With Kids

Carpinello's Instagram also has a few shots of the kids he's supported at sports games and through various other chapters of their lives, and he seems super happy to be around them.

He Is Very Into The Beach

Maybe this suggests he'll be a regular when the crew heads back to the Jersey Shore.

He Was Apparently At JWoww's First Wedding

"#tbt With big sis @errrrrricaaa at the rehearsal dinner for @jwoww and @rogermathewsnj for #wowwwedding," Carpinello captioned a photo from 2015. It might initially seem weird that he was at JWoww's wedding and is now dating her, but as she said, he's a friend of the family, so it makes sense.

He Isn't Shy About His Love For JWoww

Now that they're officially a couple, Carpinello and JWoww haven't been shy about flaunting their romance on social media. They seem like they're really happy, so why not show it off?

Hopefully, Carpinello will make an appearance on Jersey Shore: Family Vacation so that fans can get to know him more, but so far, he seems like a great match for JWoww.

More like this
‘RHOA’s Shereé Whitfield’s Boyfriend Tyrone Gilliams Hinted He’s Single
By Brad Witter
What’s New On Netflix: Lana Condor’s Ghostly Comedy & A Sexy Reality Series
By Arya Roshanian
Yes, You Can Really Charter Below Deck Med’s New Superyacht, Home
By Brad Witter
Chrishell Stause & G Flip Have “No Rules Or Regulations” In Their Relationship
By Brad Witter
Get Even More From Bustle — Sign Up For The Newsletter