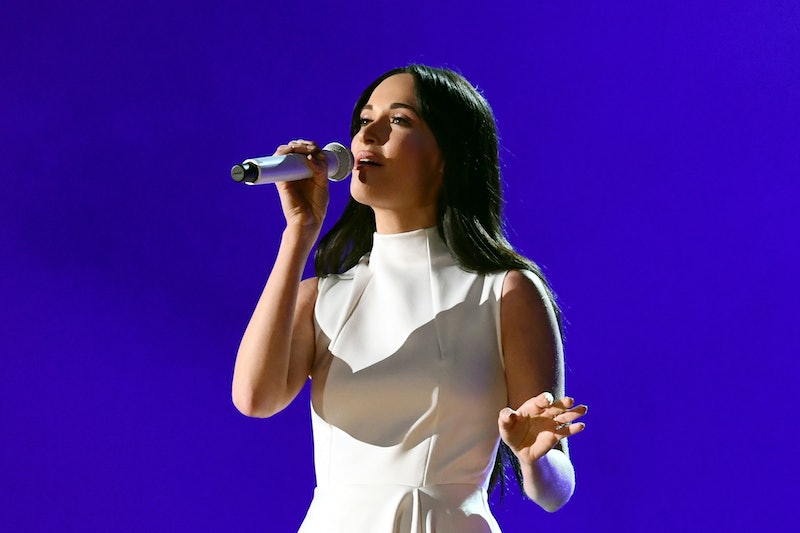 Although there have been plenty of times in Grammys history where beloved artists were unfortunately snubbed, the 2019 awards saw many great musicians deservedly take home honors. That includes Kacey Musgraves, whose Grammy win for Album of the Year (for her acclaimed record Golden Hour) was rightfully celebrated by so many people. After all, the album, which came out in March of 2018, has earned rave reviews since its release, and Musgraves is widely considered to be one of the best singer/songwriters in pop and country music today.

Shortly before her Album of the Year win — the biggest and last honor at the Grammys — Musgraves celebrated a few other successes, with Golden Hour earning a trophy in the category of Best Country Album, the song "Butterflies" winning for Best Country Solo Performance, and the song "Space Cowboy" triumphing for Best Country Song. So even if she hadn't won the final award, Musgraves clearly would've had a solid night — but obviously, earning that highly coveted honor was the cherry on top, to say the least.

Musgraves beat out some serious competition for Album of the Year, including Cardi B's Invasion of Privacy; Brandi Carlile's By the Way, I Forgive You; Drake's Scorpion; H.E.R.'s H.E.R.; Post Malone's Beerbongs & Bentleys; Janelle Monae's Dirty Computer; and Kendrick Lamar's Black Panther: The Album. Those are all great records, and any of them winning the award would've been a reason to celebrate. But for fans of Musgraves' gorgeous record, it was so satisfying to see the artist step on stage and take home the honor.

When her name was announced as the winner, Musgraves seemed truly surprised, looking shocked and overwhelmed as she walked to the stage. And during her acceptance speech, the singer appeared very emotional, making sure to acknowledge her fans, her family, her team, her fellow artists, and the many people who helped make Golden Hour a reality.

"It was unbelievable to be even in a category with such gigantic albums, really brilliant works of art, it's really crazy," said Musgraves when she got on stage. "But I'm very thankful, and I know that winning this doesn't make my album any better than anyone else's in that category. They're all so good."

"Life," she continued, "is pretty tumultuous right now for all of us, I feel like it can make you feel that way. And I feel like because of that, art is really thriving, and it's been really beautiful to see that. Thank you for championing mine. I would have nothing without songs — to me, it's just all about the songs."

In addition to winning several Grammys on Sunday night, Musgraves also performed at the show, singing "Rainbow" in front of the packed crowd. She also performed as part of the star-studded Dolly Parton tribute, surrounded by artists including Miley Cyrus, Katy Perry, Maren Morris, Little Big Town, and of course, the legendary Parton herself.

Musgraves had a huge night, and hopefully, she'll be celebrating for many days to come — and, for her fans' sakes, dreaming up more music to share with the world before long.