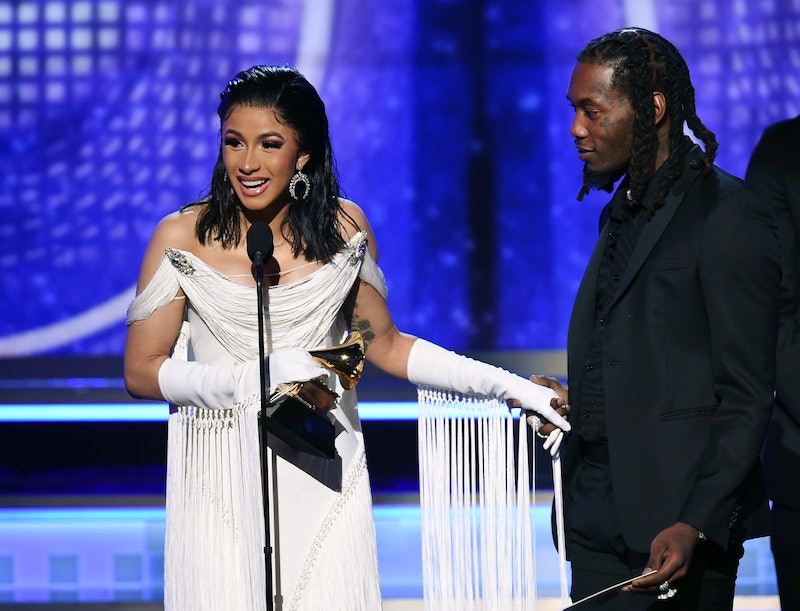 Cardi B always has a lot on her mind, if her rap verses (and Instagram Stories) are any indication. But in a super vulnerable, and unexpected moment, Cardi B's 2019 Grammy win for Best Rap Album for Invasion Of Privacy had the Bronx-native searching for the right words to express her gratitude. Even though it was clear she was processing the monumental moment, she managed to thank all of her team, give a little context as to why the award meant so much to her, and even graciously share the stage with her husband, Offset.

Not only was the win a big deal for Cardi, she also made Grammys history, by being the second ever woman to win for Best Rap Album. (Lauryn Hill, along with the rest of the Fugees, won for The Score in 1997.) It might seem like Cardi's been around since forever, but it was just 2017 when she released "Bodak Yellow," and that's a track off of this album. It hit Billboard's Hot 100 in November 2017, and that track, along with Cardi's other singles and collaborations, broke so many charting records, it's hard to keep track of them all. Just tonight, she was also nominated for Album of the Year, Record of the Year, Pop Duo/Group along with Maroon 5, Rap Performance.

In the meantime, she finished recording Invasion Of Privacy, filmed the music videos we all love to watch her in, got married, had a baby, performed at music festivals, dealt with the public judging the ups and downs of her marriage, weighed in on national politics, shut down every single hater that came for her or the people she loves, and dealt with more personal drama than most people probably give her credit for.

So, when she breathlessly took the stage at the 2019 Grammys, it made sense that she was nervous and overwhelmed (something she has also spoken publicly about). Winning Best Rap Album was a really high honor (whatever you think about the Grammys, it's pretty cool to win) for all of her hard-ass work.

"I can't breathe, babe," she said to Offset, who had accompanied her onstage. "Oh, the nerves are so bad," she added. "Maybe I should start smoking weed." As she gained her composure, she called out all of the people who had helped her with her album, especially those who had verses on it, like J. Balvin and even her husband.

Through deep breathes and some tears she added, "When I found out I was pregnant, my album was not complete... We had to shoot these videos while I was still not showing. It was very long nights... You, husband, thank you. Nah, seriously, because he was like, 'Nah, you gonna do this album, girl. We gonna have this baby and you gonna make this album.'"

No matter who you might have wanted to win tonight, you can't not acknowledge that Cardi's rise to stardom has not just been fun to watch, and literal music history in the making, but the well deserved result of all of her hard work. And while it's nice of her to thank everyone who helped out and even shout out Offset for getting her moving before she gave birth to Kulture, that Grammy win was all hers tonight. Now if only she could take a break and really let it all sink in.