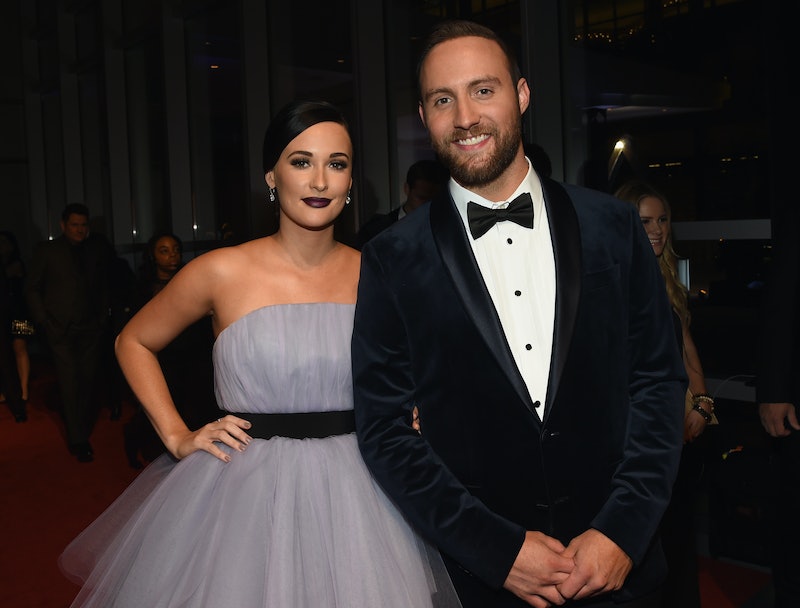 Most of the best love songs are inspired by real-life romance. According to People, Kacey Musgraves husband Ruston Kelly is a singer-songwriter as well, and the couple's courtship helped inspire her most recent album. Musgraves' record Golden Hour was a breakout moment for the country singer and led to four nominations at the 2019 Grammys, including album of the year, best country album, best country solo performance for “Butterflies,” and best country song for “Space Cowboy.”

The songs are largely inspired by her relationship with Kelly, whom she met at Nashville, Tennessee's legendary Bluebird Cafe in 2016, according to People. Ruston reportedly performed at a writer's night, and Musgraves was so moved by his songs that she asked him to write music with her. The two began dating shortly after.

In October, 2017, Musgraves and Ruston tied the knot in Tennessee after a little over a year of dating, according to Us Weekly. The two got engaged on Christmas Eve in 2016. The singer shared a special message with fans on Instagram following the proposal, writing:

"I didn't say yes...I said HELL YESSSS!! Last night, the best man I've ever met got down on one knee in my little pink childhood home..in the same room I played with my ponies and barbies and asked me the easiest question I've ever been asked. I finally know what everyone means when they say 'you just know.'"

The singer has been open about the relationship since, sharing plenty of updates from her wedding on Twitter and Instagram. On the big day, Musgraves shared a picture from the ceremony with a special caption:

"Saturday, in a sacred place where two rivers meet and join together, I married my best friend barefoot and surrounded by the deepest kind of magic and love that exists."

While Kelly has had a major influence on Musgraves' personal life, he also pushed her professionally. In July, Musgraves said Kelly helped her open up in her music, according to Hits Daily Double. "I’ve never had love songs or relationship songs. I write about other things, other people’s stories or perspectives," she said. "When you’re with someone you truly love to the core and they feel that way about you, there’s no sense of panic or that it’s going to come apart. I’m living in a much more positive light now. It’s maybe opened my heart a little."

Kelly has also cited Musgraves, who sings background vocals on his own album Dying Star, as a major influence. In Rolling Stone in September of 2018, Kelly discussed Musgraves' impact on his life as he recovered from a drug addiction. "She was such a strong redemptive force in my life,” he told the publication. “I didn’t think I was worthy of anything. She reminded me that it doesn’t matter, that everyone has a past. Someone has to help pick you up somehow.”

Golden Hour took home album of the year at the 2018 CMA Awards, as per People. The album also brought her new critical recognition, and captured the attention of Harry Styles, who took her on tour. It's been a career-defining work for the country-music innovator, and if it wins big at the Grammy Awards, Musgraves will likely mention Kelly in her speech.