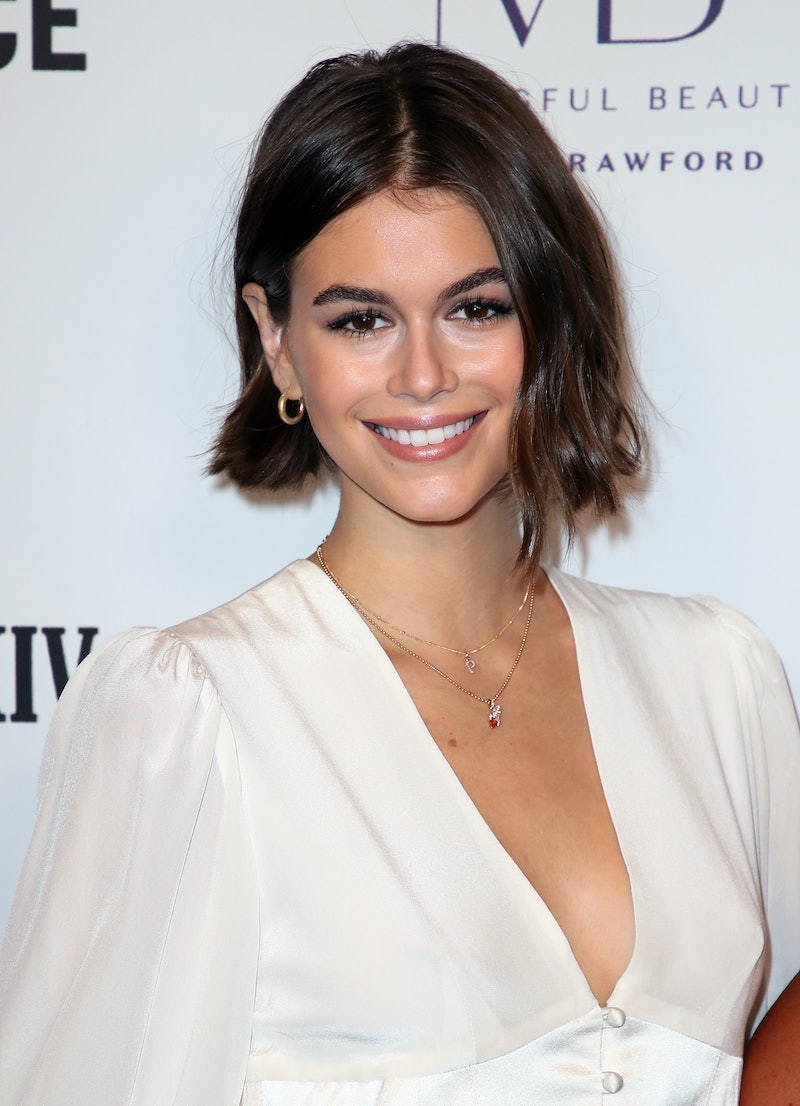 Another Hollywood relationship has reportedly come to an end. Kaia Gerber and Pete Davidson split, according to Page Six. The two never officially confirmed their relationship (they were first linked in October 2019), but the outlet reported on Tuesday, Jan. 14, that the model and Saturday Night Live comedian have gone their separate ways after three months of dating. Bustle has reached out to reps for both Gerber and Davidson, but did not receive an immediate response.

A source told Page Six, "It looks like Pete and Kaia are over. It got very overwhelming for Kaia. Pete has a certain M.O. and he's very intense to his girlfriends. Kaia is only 18 and it’s a lot to deal with." E! News also reported on Monday, Jan. 13, that the two were only taking a break in order for the actor to focus on his mental health.

According to E! News, Davidson is seeking treatment and hasn't had any contact with Gerber, who reportedly is unsure if she wants their relationship to continue. "What she saw happen with Pete was very concerning and scary for her," a source reportedly told E!. "She cares about Pete and wants him to get better. But their future is very much up in the air." The outlet also cited a different source who said that if they were to break up there would be "no bad blood between the two."

Whether the two are dating or not, Davidson made a reference to seeking mental health treatment during SNL's Dec. 21, 2019 episode. During Weekend Update and after being asked by Colin Jost what he was doing for the holidays, Davidson said he was "going on a little vacation." He continued, "You know, the kind of vacation where, like, insurance pays for some of it, and they take your phone and shoelaces. And you have roommates but it still costs like a hundred grand."

Davidson previously went to a treatment facility in 2016 for mental health issues that he thought were being caused by excessive marijuana use, but, as he told Howard Stern in September 2018, "it wasn't the weed." He has also been open about his struggles with borderline personality disorder, which he first revealed in September 2017.

According to some reports, Gerber's parents, Cindy Crawford and Rande Gerber, have also tried to assist Davidson and help their daughter through a rocky time in their reported relationship. E! News reported at the end of December 2019 that a source said, "They stepped in to try and guide her and to help Pete through a difficult time." It's unclear if Davidson and Gerber truly are broken up — if they were a couple to begin with — but all that matters is that Davidson appears to be focusing on himself and his mental health.

More like this
Selena Gomez Is Fine Being Single, But She Still Manifested Romance On 'SNL'
By Martha Sorren, Jake Viswanath and Jack Irvin
Who Is 'Umbrella Academy' Star Elliot Page Dating After His Divorce?
By Jake Viswanath
'Stranger Things' Star Sadie Sink's Love Life IRL Is Nothing Like Max's
By Alyssa Lapid
Bachelor Nation's Blake Horstmann Is Dating 'Love Is Blind' Star Giannina Gibelli
By Jake Viswanath and Radhika Menon
Get Even More From Bustle — Sign Up For The Newsletter