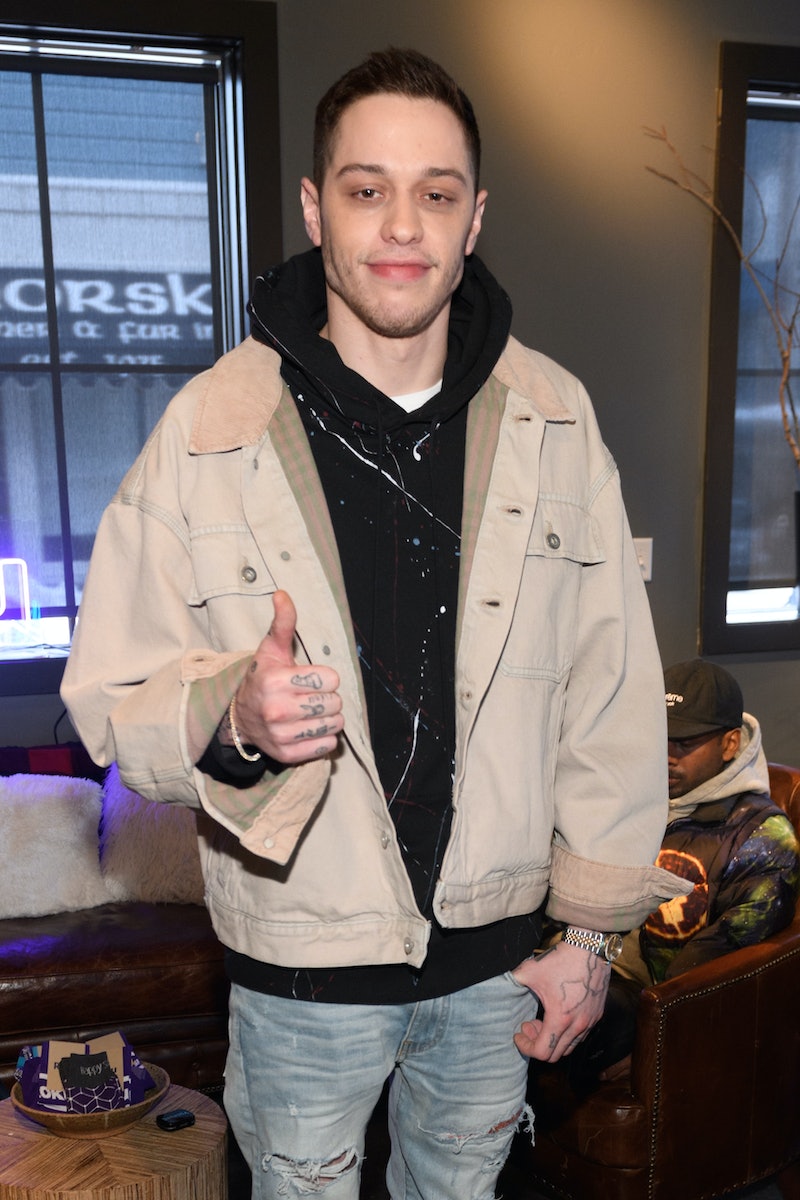 In the last year and a half, Pete Davidson has dated Cazzie David, Ariana Grande, Kate Beckinsale, Margaret Qualley, and now, if the rumors are true, a new famous brunette. According to reports, Davidson may be dating Kaia Gerber, as the two have been spotted together on more than one occasion in New York City. (Bustle reached out to Davidson's manager and Gerber's reps for comment, but did not receive an immediate response.)

In a fan-taken photo obtained by The Morning Toast, Davidson and Gerber were seen sharing a table at Sadelle's in New York City earlier this week. "They were having lunch and laughing together as they ate," an onlooker told Us Weekly. "Pete appeared happy to be with Kaia, and she seemed like she was into Pete, though there was no PDA."

A few days later, Page Six snapped Davidson leaving Gerber's apartment in SoHo, but a source for the outlet insisted the comedian and the model are totally "just friends." Another insider for Page Six said they "most likely" met back in June when Davidson and Gerber both walked the runway for Alexander Wang.

It's barely been a week since Davidson reportedly split from Qualley. He and the Once Upon A Time In Hollywood actor dated quietly for a couple of months and still "remain friends," a source close to the former couple told Us Weekly last week. Before Qualley, Davidson had a few PDA-filled months with Kate Beckinsale earlier this year, and was engaged to Ariana Grande after a whirlwind romance last summer.

Gerber was most recently linked to fellow model Wellington Grant. However, the last time they were photographed together was back in April when getting dinner with Gerber's parents, Cindy Crawford and Rande Gerber. Then in September, the model seemingly admitted that she was single once again during a cover story interview for Vogue UK. "When I'm working, I don't have the energy to even flirt with anyone," she told the outlet. "But I'm not losing hope in all love forever."

Davidson and Gerber definitely appear to be keeping their whatever-ship low-key for now. It's way too early to tell if things will take a more romantic turn, or if Davidson's just networking for his next runway gig.

More like this
Khloé Kardashian Is Reportedly Dating A Private Equity Investor She Met Through Kim
By Jordyn Tilchen and Jake Viswanath
Dixie D’Amelio & Noah Beck “Love Each Other” Despite Breakup Rumors
By Julia Emmanuele, Jordyn Tilchen and Grace Wehniainen
Hailey Bieber Reacts To Rumors She "Stole" Justin & *That* Selena Gomez Chant
By Radhika Menon
Adam Devine Hilariously Let Everyone Know He’s *Not* Accused Cheater Adam Levine
By Brad Witter
Get Even More From Bustle — Sign Up For The Newsletter