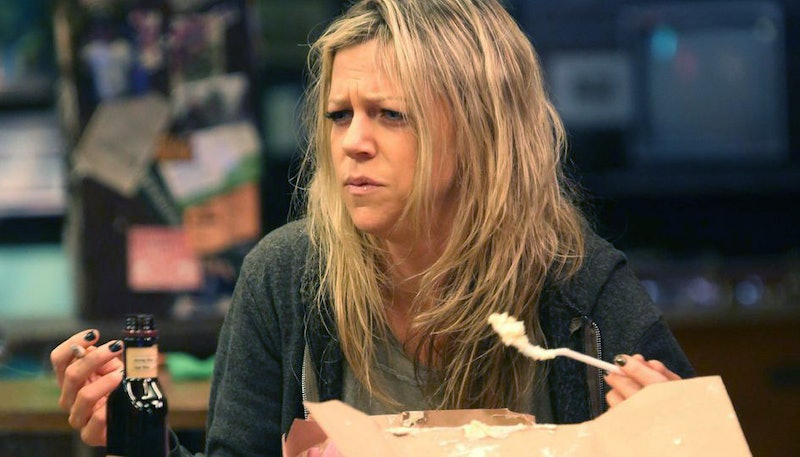 After 11 seasons of nonstop debauchery, it's hard to imagine the crew at Paddy's Pub being bogged down with a straight man... or straight woman, as the case may be. But that almost was the case. In a recent interview with The Cut, Kaitlin Olson revealed that her It's Always Sunny character Dee was initially written to be boring, a sensible foil. But Olson didn't want to be regulated to a sidelined, eye-rolling fixture; she wanted to be a part of the action. "I was like, here’s the honest truth: You guys are so talented at writing these ridiculous crazy characters. I would love to do that if you wrote a character like that for me as well," she said. It's an important feminist stand that speaks to the power of Olson in this group dynamic, even if Sweet Dee herself is constantly getting dismissed by her male cohorts.

You can't deny that there's Boys Club in It's Always Sunny, because there is. In a narrative sense, Dee has been Meg Griffin-ed for large chunks of the show, sporadically excluded from their schemes as they hurl insults about how she's a bird. This reached an important breaking point in "The Gang Broke Dee," which has a depressed Deandra, sweatpants-clad and eating trash cake. She ends up succeeding at being a stand-up queen by making self-deprecating claims about her life. Her star rises higher and higher, until it's revealed that the rest of the gang faked her success, completely humiliating her.

So, all of this, out of context (or even in context), doesn't read as very empowering. But looking into the comedy of Dee is actually a great way of looking into the comedy of Olson. It's definitely a stand-out episode that shows the actress's ability to shine among her cohorts, even if Dee is destined for failure. Lest we forgot, her earlier stand-up attempts were punctuated by her nervous slash hilarious dry-heaves, and watching Olson do that contorted gesture with that horrifying sound is star-making. These aren't the first instances of Dee's grotesqueness providing gut-wrenching laughter, and that's all to the credit of Olson's fight.

The truth is, no matter how much Dennis, Charlie, Mac, and Frank try to undermine Dee, she is just as much a valuable part of the gang. She gets substantial plots and delivers side-cracking jokes (stand-up aside). And that's helped by the fact that Olson fought to be just as vile as the guys. "'I don’t just want to be a girl character, the voice of reason,'" Olson recounted to The Cut about requesting to be more prominent. "'I want to be the crazy one. So if you write something like that for me, I’ll do it.' And to their credit, they wanted to.'"

Because of the gang's overt terribleness, It's Always Sunny is show that forces you to leave political correctness at the door. As such, of course this win for feminism is proooobably a complicated monster at best. But you have to give them props for letting Sweet Dee and Olson showcase her own strong brand of raunchy humor, for 11 seasons strong.

It's Always Sunny in Philadelphia Season 11 debuts Jan. 4 on FX, and you can catch Olson on The Mick, Tuesday nights on Fox.

More like this
UK Viewers Will Have To Wait To Watch The Handmaid’s Tale S5
By Maxine Harrison
15 Offensive AF Jokes In 'Friends' That Really Aren't OK
By Tolly Wright, Bustle Editors and Meguire Hennes
Devi Is Going To Meet A “Smoldering Bad Boy” In ‘Never Have I Ever’ Season 4
By Jack Irvin and Gabrielle Bondi
Netflix Reveals First Look At Wednesday In The 'Addams Family' Spinoff Series
By Bustle Editors
Get Even More From Bustle — Sign Up For The Newsletter