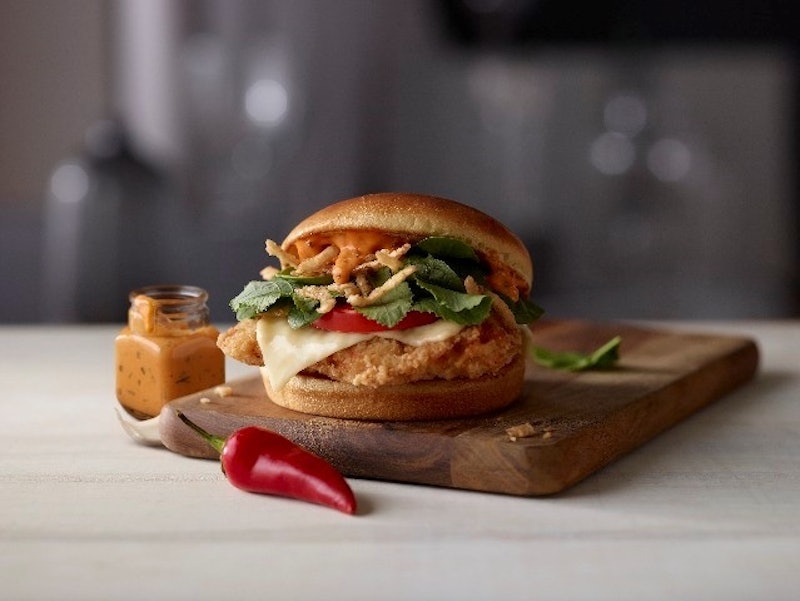 My go-to order at McDonald's has always been a cheeseburger, fries, and a Coke. I ventured out of my comfort zone during the McD.L.T. — that '90s craze where the burger, served separately from the lettuce and tomato to keep it fresh and crunchy, was promoted by a pre-Seinfeld Jason Alexander with a full head of hair — but I always return to my tried and true burger combo.

The McDonald’s Signature Crafted Recipes sandwich line seems like it would be more likely to pop up on the menu at LYFE Kitchen, a healthy fast-food chain started by two former McDonald's executives. But, the restaurant made famous for its amazing Happy Meal realizes that diners today want choices. And Sriracha. And kale because, including the word "kale" in anything instantly makes it seem healthy.

As far as Sriracha is concerned, TODAY.com said, "This hot sauce exploded onto the food scene and has become a bonafide trend, to the point where it’s in everything from chips to fast-food sandwiches, and even vodka."

Nation's Restaurant News reported the the Signature Sriracha sandwich will be part of McDonald’s Signature Crafted Recipes sandwich line, introduced earlier this year allowing customers to choose a bun, recipe, and whether they want a burger, crispy chicken, or grilled chicken. Because, it's all about choice people. Other recipes include Sweet BBQ Bacon and Pico Guacamole — is this like a taco burger?

"We will continue to offer Signature Crafted Recipes for burgers and chicken sandwiches that appeal to our customers’ tastes and preferences,” McDonald's spokeswoman Becca Hary said in an email to Nation's Restaurant News.

If the Sriracha sandwich is not your jam, you can also get Sriracha Mac sauce as a dipping sauce for your chicken nuggets, and fries.

While Sriracha Mac sauce actually made its debut last year during a test run of the marriage of burgers and hot sauce, the customizable sandwiches are new. So, if you're low on cash, and you want to have kale for lunch, this just might be the answer.

And, if you're wondering how kale was crowned queen of the produce prom, Spoon University reported that PR agent Oberon Sinclair loved kale so much that she made up a false organization (the American Kale Association) to tout the many benefits of her beloved superfood. You can thank Sinclair for your kale intake because, before her love letter to kale, this leafy green was primarily used as a garnish by caterers.