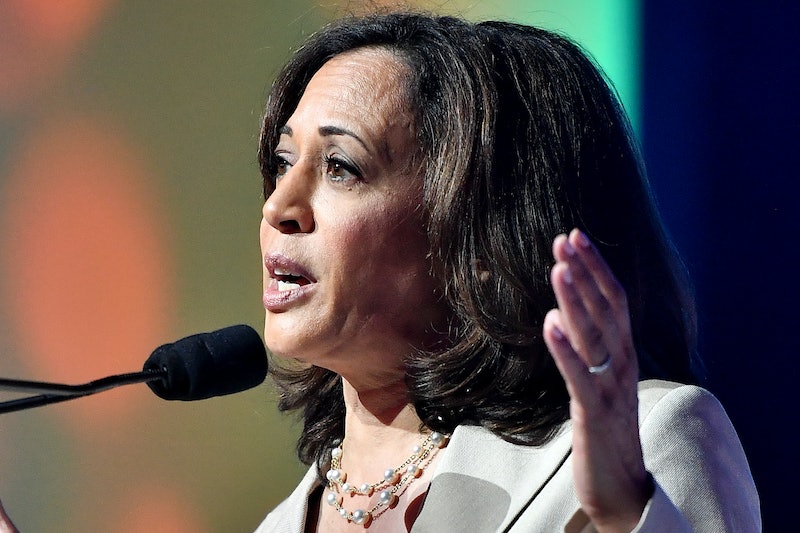 Democratic presidential candidate Sen. Kamala Harris introduced a marijuana decriminalization bill on Tuesday that would decriminalize marijuana at the federal level. The bill would also expunge marijuana convictions, tax marijuana to generate revenue, and then use those funds to help people who've been convicted of marijuana offenses. The bill underscores just how far the California senator's views have come since she was a district attorney in San Francisco who opposed marijuana legalization.

Harris wrote the bill, called the Marijuana Opportunity Reinvestment and Expungement Act, and teamed up with House Judiciary Chairman Rep. Jerry Nadler, who is co-sponsoring it, according to USA Today. Harris says in a statement that "Times have changed—marijuana should not be a crime."

"We need to start regulating marijuana, and expunge marijuana convictions from the records of millions of Americans so they can get on with their lives," she says in the statement. "As marijuana becomes legal across the country, we must make sure everyone—especially communities of color that have been disproportionately impacted by the War on Drugs—has a real opportunity to participate in this growing industry."

The goal of Harris' bill isn't just to decriminalize weed nationwide. The revenue generated by taxing its sale would go into three trust funds that support people with past marijuana convictions and people who want to go into the marijuana business. Here's a breakdown of the bill and Harris' past views when she was a prosecutor.

What Does This Bill Do?

The bill will decriminalize weed at the federal level, but it wouldn't tell states what they have to do. Under decriminalization laws, having small amounts of weed usually doesn't result in a charge, though it does sometimes carry a fine. Under legalization, there are no penalties or fines for having weed and sale of it is usually allowed, according to Vox.

Marijuana can currently be used recreationally in 11 states and Washington D.C.; some form of medical marijuana is legal in 33 states; and 26 states have decriminalized possession of small amounts of weed, according to The Hill. Harris' bill doesn't prevent states from continuing to criminalize weed if they want to, which means that in some states, you could still be charged for having it, even if her bill passes, per Vox.

Under current law, when you're arrested for a marijuana-related crime, you are also charged with a federal crime under the Controlled Substances Act (CSA), which lists marijuana as a Schedule 1 controlled substance. Harris' bill would get rid of that federal charge.

The bill would also help people convicted of marijuana offenses in a few ways, according to a statement from her office:

Lastly, the bill would funnel 50% of tax revenue from the sale of weed into three trust funds. They include the Community Reinvestment Grant, which will provide legal aid, job training, and re-entry services to "individuals most adversely impacted by the War on Drugs"; the Cannabis Opportunity Grant, which will support small cannabis businesses owned by "economically and socially disadvantaged individuals"; and the Equitable Licensing Grant, which would help reduce barriers to cannabis business licensing for people below the federal poverty level.

Harris hasn't always been supportive of cannabis legalization or decriminalization efforts. In 2010, she opposed a California legalization measure. A spokesperson told the Capitol Weekly at the time, “spending two decades in court rooms, Harris believes that drug selling harms communities.” She also reportedly laughed at another candidate's support for legalization in 2014, according to Forbes.

Harris explained her new view in her book, The Truths We Hold, released earlier this year, according to Vox. She criticized that "marijuana laws are not applied and enforced the same way for all people," adding, "African-Americans use marijuana at roughly the same rate as whites, but are approximately four times more likely to be arrested for possession. That’s just not fair."

She also joked during a February interview with the syndicated morning radio show The Breakfast Club that she had smoked marijuana before, saying "I did inhale. It was a long time ago."

All of the Democratic presidential candidates in the 2020 race support legalization or decriminalization in some form, with the exception of former Vice President Joe Biden. The issue is poised to be an important one for young progressive voters.

Though her views haven't always been consistent, Harris' new decriminalization bill appears to be a firm declaration of where she stands on the issue now.