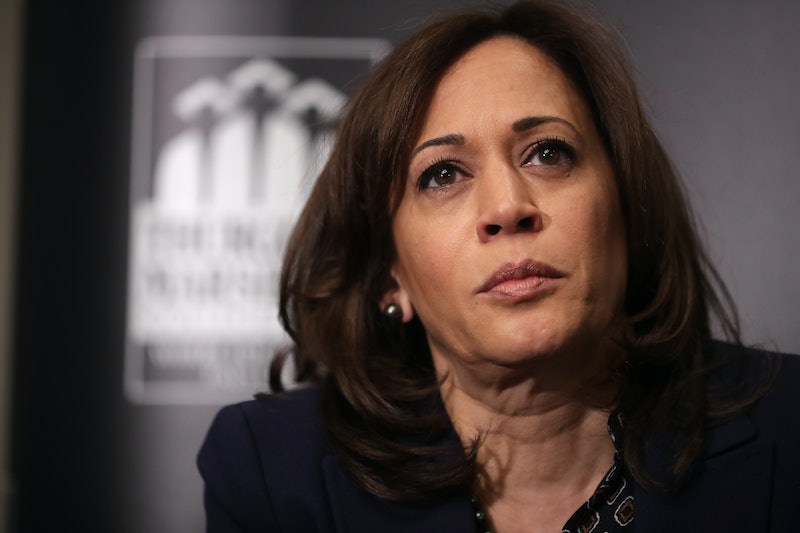 The days when admitting to having smoked pot amounted to the end of one's political career are long gone. Now, there are still Democratic 2020 presidential contenders entering the race, and one of them has already made that admission — and not in a sheepish manner. Kamala Harris publicly said that she smoked marijuana, making her the first of the Democratic primary field to do so.

When asked on The Breakfast Club radio show whether she had smoked in the past, Harris said, “I have ... and I did inhale. It was a long time ago."

Harris' joke was a reference to former President Bill Clinton's 1992 claim that he had "experimented with marijuana a time or two" while he was a Rhodes Scholar in England, but he "didn't inhale," as Time later recounted.

"I just broke news," Harris then said of her acknowledgement. She also told The Breakfast Club that the claims that she was against marijuana legalization or that she had worked against it as a prosecutor in California were untrue.

“Half my family’s from Jamaica, are you kidding me?” Harris said.

The tide of marijuana legalization has been slowly sweeping the nation, with 10 states allowing for recreational marijuana use after the 2018 midterms.

There's also action at the federal level to legalize recreational pot, after Oregon Democratic Sen. Ron Wyden introduced the Path to Marijuana Reform package of bills. The package includes three smaller bills, which would effectively legalize and regulate marijuana usage and then also make it entirely legal for businesses to sell it.

"The federal prohibition of marijuana is wrong - plain and simple. Too many lives have been wasted and too many economic opportunities have been missed," Wyden said of his initiative in a tweet. "It’s time for Congress to respect the will of the voters in Oregon and nationwide, who are demanding common-sense drug policies."

In her interview with The Breakfast Club, Harris expressed a less policy-driven defense of marijuana legalization.

“I think that it gives a lot of people joy, we need more joy,” she told The Breakfast Club.

While none of Harris' 2020 primary rivals have openly admitted to having smoked pot themselves, she isn't the first to declare her support for full legalization. Sen. Cory Booker brought up marijuana legalization as an essential element of criminal justice reform even earlier in his campaign, according to Newsweek. And when Booker introduced a bill in 2020 to legalize marijuana across the country, he gained support from Harris and numerous other Senate colleagues.

Harris' open admission of marijuana use is one marker of how normalized it has become in society, and another is the polls showing broad support for full legalization. According to a 2018 Pew poll, about 60 percent of Americans believe that marijuana should be legal to use, and that number has been on an upward trend since the mid 2000s. It's likely that the 2020 elections will see another round of ballot initiatives making the drug increasingly legal across the country. It makes perfect sense, then, that rather than having to dance around the question like Clinton did back in 1992, Harris could just come out and talk about when she smoked in college.