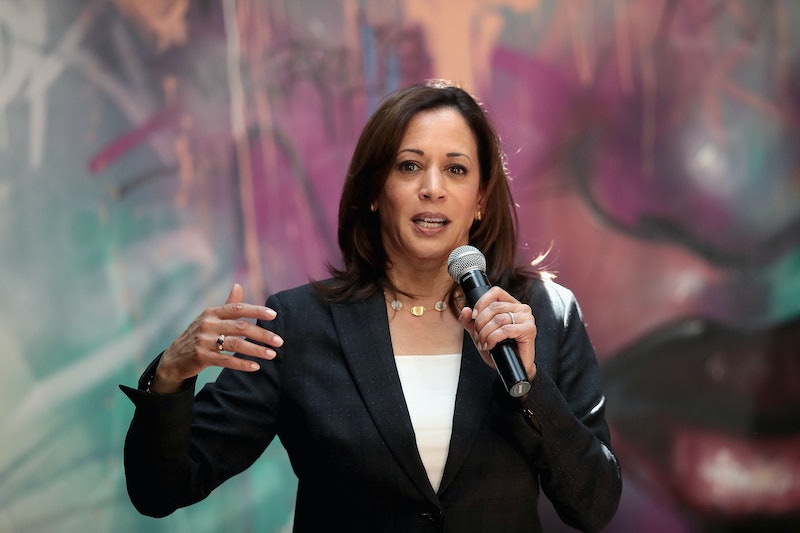 As the Trump administration continues to double down on its immigration policy, one Democratic presidential candidate released a policy proposal on Wednesday that could create a pathway to citizenship for up to 2 million Dreamers, or undocumented immigrants who arrived in the United States as children. California Sen. Kamala Harris' plan to protect Dreamers would involve the use of executive action to shield these immigrants from deportation and make it easier for Dreamers to obtain green cards.

If Harris wins the 2020 presidential election, she hopes to immediately "reinstate and expand DACA," the Deferred Action for Childhood Arrivals program first implemented by the Obama administration. According to Harris' 2020 campaign site, she plans to allow immigrants who entered the country at the age of 17 or younger to seek protections under DACA. She also wants to eliminate an existing requirement mandating that Dreamers apply for these protections before they turn 31, and extend the term of DACA protections to three years rather than two.

According to her policy proposal, Harris also plans to take four concrete executive actions to give Dreamers a pathway to citizenship. First, she hopes to create a "Dreamers Parole-in-Place Program” to formally admit these young immigrants to the U.S. Then, Harris plans to put forth a rule indicating that Dreamers are eligible to apply for legal status because they were brought to the country as children.

Third, Harris wants to direct the Secretary of Homeland Security to retroactively give Dreamers work authorization that would allow them to adjust their work status. Finally, she plans to issue another rule stating that family separations are “extreme hardship” that should be accounted for when Dreamers apply for green cards.

As a former California attorney general and as a senator, Harris has been a vocal advocate for DACA, The Sacramento Bee reported last year. However, Harris' policy proposal would go much further than DACA. For starters, Harris intends to reimplement a deferred action program for parents of citizens or permanent residents, similar to an Obama-era program called Deferred Action for Parents of Americans and Lawful Permanent Residents (DAPA). The Trump administration rolled back DAPA in 2017, per The Atlantic, but Harris hopes to bring back protections for parents.

In her plan, Harris has also proposed an extension of existing DACA protections to make them more widely accessible. She wants to increase the age at time of entry into the U.S. from 15 and under to 17, and waive a requirement that DACA recipients must leave the country for up to 10 years in order to apply for legal status.

Harris' plan does not break down the costs associated with implementing these protections for Dreamers, but she does estimate that the plan will add approximately $445 billion to the U.S. gross domestic product over a 10-year period. Harris' campaign website claims that the proposal would protect over 6 million immigrants from deportation, and create a pathway to citizenship for 2.1 million Dreamers.

According to CNN, the Supreme Court is preparing to meet behind closed doors on Thursday to discuss whether or not to take up a case regarding the Trump administration's efforts to phase out DACA. If the justices do decide to take up the case, DACA could become an increasingly critical issue during next year's presidential election, CNN reported.