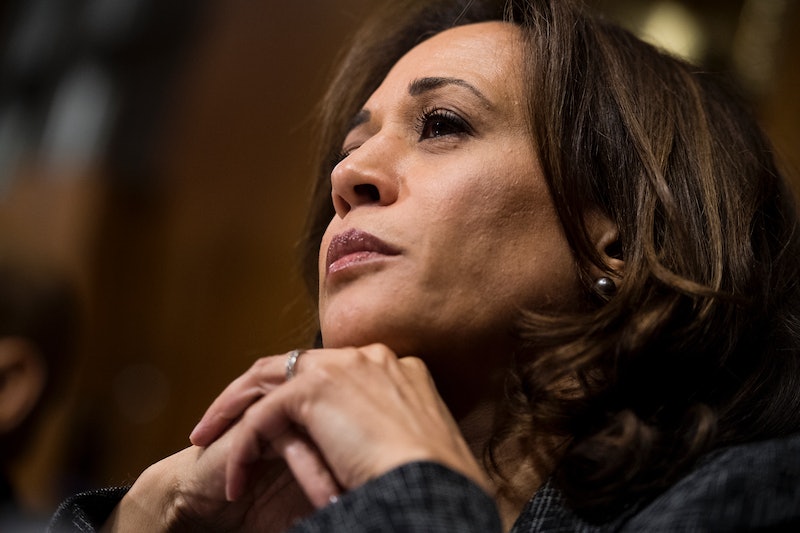 The Democratic primary field for 2020 is shaping up to be a crowded one. California Sen. Kamala Harris said she's running for president on Monday, making her one of four women to throw her hat in the ring for the chance to challenge President Donald Trump at the polls come November 2020.

"I love my country. I love my country," Harris said in an appearance on ABC's Good Morning America. "This is a moment in time that I feel a sense of responsibility to stand up and fight for the best of who we are."

If she were elected, Harris would break a number of barriers as the first woman president, the first South Asian woman president, and the first black woman president, according to the Washington Post. Her announcement came on Martin Luther King, Jr. Day, and Harris told ABC that she's striving for an America that lives up to the civil rights leader's values.

Harris had previously said that the decision of whether of not she would run for president would "ultimately be a family decision." In early December, the California senator told Mika Brzezinski of MSNBC's Morning Joe that she was well aware of how her diverse background would lead to a barrier-breaking presidential campaign. "Let's be honest. It's going to be ugly," she told Brzezinski. "When you break things, it is painful. And you get cut. And you bleed."

Since her election to the Senate in 2016, Harris has been an outspoken critic of President Trump, telling him at one point earlier this year to "stop being mean," according to The Atlantic. She didn't dwell on the president in her campaign announcement, though.

Prior to her election to the Senate, Harris served as California's attorney general and San Francisco's state attorney. She has described herself as a progressive prosecutor, although she's been criticized for her record and her embrace of that label.

"Time after time, when progressives urged her to embrace criminal justice reforms as a district attorney and then the state’s attorney general, Ms. Harris opposed them or stayed silent," Lara Bazelon, a law professor at the University of San Francisco, wrote in a recent op-ed for The New York Times.

In the interview with ABC, Harris was asked what she meant when she told those on the left to get over their bias against law enforcement. "I think it is a false choice to suggest that communities do not want law enforcement," she said. "Most communities do. They don't want excessive force. They don't want racial profiling, but then nobody should."