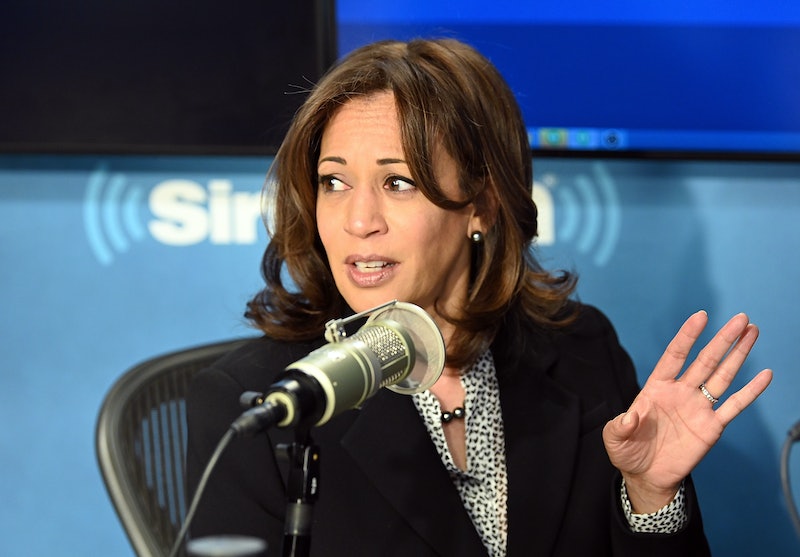 In an interview on Pod Save America that aired Tuesday, Sen. Kamala Harris said the truancy laws she supported early in her career aren't something she'd back as president, and expressed "regret" that they may have led to the incarceration of parents. Harris said that the policy, which threatened parents with jail time if their children missed a certain amount of school, had "unintended consequences," and that she wouldn't support a nationwide version of it if she's elected president.

"My regret is that I have now heard stories where, in some jurisdictions, [local] DAs have criminalized the parents," Harris, who's running for the Democratic presidential nomination, told host Jon Favreau. "I regret that that has happened, and the thought that anything that I did could have led to that, because that certainly was not the intention. Never was the intention."

In the past, however, Harris has said that prosecuting parents for truancy was part of the policy she championed.

"I decided I was going to start prosecuting parents for truancy," Harris explained in a speech at the Commonwealth Club in 2010 while discussing the policy. "I said, look, I'm done. This is a serious issue, and I've got a little political capital, and I'm going to spend some of it." Video of the event shows her laughing after noting how controversial the policy was in San Francisco.

During her time in California politics, Harris supported two similar but distinct truancy laws. One was a policy that she spearheaded and implemented in 2006, when she was district attorney of San Francisco, while the other was a statewide law implemented in 2011 that she endorsed during her campaign to be California attorney general. Both of the laws imposed jail time for parents of "chronically truant" children.

"I took a look at, and did an analysis of, who our homicide victims were who were under the age of 25. I learned that over 90% were high school dropouts," Harris told Pod Save America while discussing why she implemented the San Francisco policy. "I realized that the system was failing these kids, not putting the services in place to keep them in school, to make it easier for their parents to do what those parents naturally wanted to do around parenting their children. And so I put a spotlight on it. And as a result of doing that, we ended up increasing attendance by over 30%."

At a 2014 event hosted by Vanity Fair, Harris said that when she implemented the San Francisco policy, she "had no intention or desire to prosecute parents," and while speaking with Pod Save America, she noted several times that policy she championed didn't actually result in any incarcerations when she was district attorney.

"When I was DA, we never sent a parent to jail," Harris said. But in a 2009 Facebook post, Harris wrote that "to date, I have prosecuted 20 parents of young children for truancy." NBC Bay Area reported at the time that the "majority of the charged parents chose to work with the court to get their children back in school."

When Favreau pointed out that some parents were incarcerated under the California truancy law, Harris responded that this was "in other jurisdictions," and that she "had no control over that."