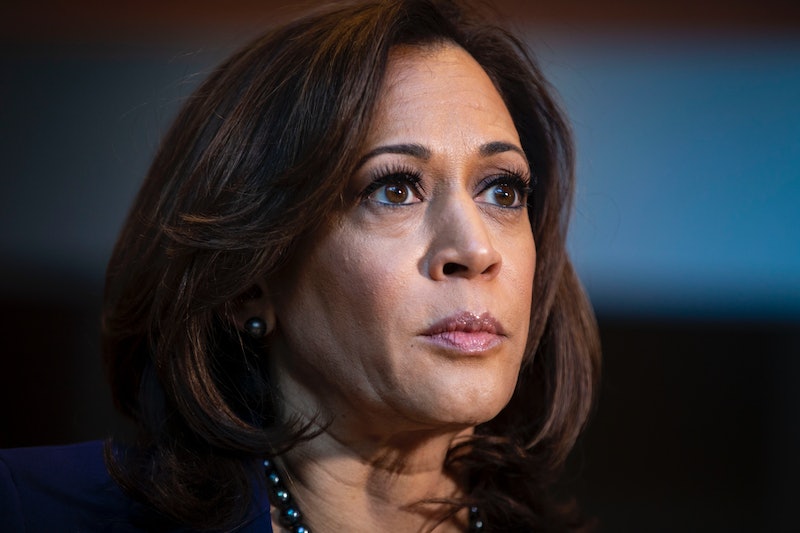 On Tuesday, in an exclusive interview with The Root, California Democratic Sen. Kamala Harris said President Trump is a "racist." The senator, who recently launched her 2020 presidential campaign, unequivocally agreed when The Root's senior reporter Terrell Jermaine Starr asked if Harris "definitely" viewed him that way.

Starr pressed Harris, "So, you definitely would agree that [Trump's] a racist?"

Harris' interview with The Root comes several weeks after she officially announced that she would run in 2020. At the time, the Democrat told ABC's Good Morning America, "I love my country. This is a moment in time that I feel a sense of responsibility to stand up and fight for the best of who we are."

Harris also told The Root about her efforts to add lynching to the federal list of hate crimes in United States. In 2018, Harris, New Jersey Democratic Sen. Cory Booker (another 2020 presidential race contender), and South Carolina Republican Sen. Tim Scott introduced The Justice for Victims of Lynching Act, which would make lynching a hate crime.

The bill was approved by the Senate in December, making such mob killings illegal under federal law. Harris hailed the passage of the anti-lynching bill in the Senate on Twitter at the time. During The Root interview, Starr asked Harris, "What does that say about the America you want to lead that this was not a federal crime already?"

"We still have a lot of work to do," Harris told Starr. "We still have real issues about not only vestiges of the past, but we have issues in terms of what is currently happening in this country [...] What it says to me that we still have to be fighters for the truth even when speaking that truth makes a lot of people uncomfortable."

Harris is not the only Democrat to have described Trump as a "racist." In early January, New York Democratic Rep. Alexandra Ocasio-Cortez was asked in CBS' 60 Minutes interview if she believed Trump was a "racist."

"Yeah," Ocasio-Cortez said then. "Yeah, no question. When you look at the words that he uses, which are historic dog whistles of white supremacy. When you look at how he reacted to the Charlottesville incident, where Neo-Nazis murdered a woman, versus how he manufactures crises like immigrants seeking legal refuge on our borders, it’s — it’s night and day."

In her interview with The Root, Harris also spoke about how the president's "racism and bigotry" has affected her.

"When I looked at what happened in Charlottesville [Virginia] and I watched people marching and chanting with these tiki torches and hate coming from their mouths [...] and then for the leader of the nation to equate the 'both sides', it gave me an incredible amount of pain and concern," Harris told Starr. "If you are a leader, you don't condone, support, and counsel hate."

She also got candid about race in America. "Let's be very clear. We had years where people were talking about we're a post-racial society, which I have rejected from the moment that discussion began. We are not," she said. "Race is still a big issue in America."