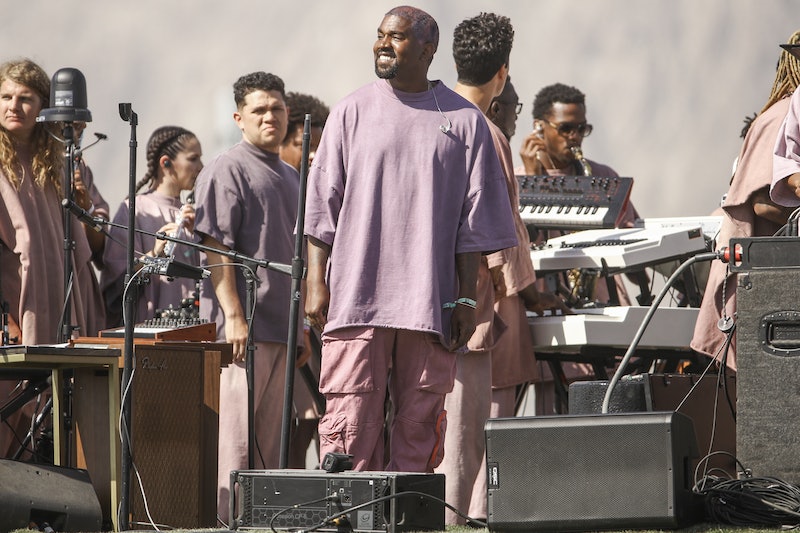 Kanye West Sunday Service gatherings have become infamous thanks to Instagram. But, unless you were one of the few lucky people to witness his gospel performance at Coachella on Easter Sunday, few people outside of his family and friends have had the chance to be a part of it. Now, Kanye West's Jesus Is King movie will give fans the opportunity to experience the rapper's take on a Sunday Service, featuring music from his highly anticipated new album of the same name.

Jesus Is King: A Kanye West Film was shot during one of West's Sunday Services, according to a press release issued by IMAX, as reported by Art News. While fans know West's Sunday Service frequently changes location, this particular Service was recorded at a never-before-seen installation by visual artist James Turrell, in keeping with the rapper's history of being a major art enthusiast.

“Filmed in the summer of 2019, Jesus Is King brings Kanye West’s famed Sunday Service to life in the Roden Crater, visionary artist James Turrell’s never-before-seen installation in Arizona’s Painted Desert,” the press release reads. “This one-of-a-kind experience features songs arranged by West in the gospel tradition along with music from his new album Jesus Is King—all presented in the immersive sound and stunning clarity of IMAX.” The film will be screened in IMAX theaters starting on October 25.

The announcement of the IMAX film coincided with the originally reported release of West's upcoming album Jesus Is King, which was supposed to finally drop on Sunday, Sept. 29, as promised by his wife Kim Kardashian on her Instagram stories. As fans now know, the album had still not been released as of Monday morning. However, some lucky fans heard an unfinished version of the record at listening parties that West hosted in Detroit, Chicago, and New York over the weekend, dubbed Jesus Is King: A Kanye West Experience.

Just as Kardashian teased on Friday, Sept. 27, the album reportedly consists of 10 tracks. All of them were played during the listening sessions, albeit some of them in unfinished forms, according to Billboard. And though West didn't give fans a new release date for the album, he did give New York attendees a first look at the Jesus is King album cover, which was reposted by Instagram fan accounts later that day and confirmed as legitimate by the outlet.

"New York City is definitely one of my hometowns," West reportedly told the crowd at Sunday night's Manhattan show, per Billboard. "I wasn't fully saved during Coachella. I came to know the truth and joy of Jesus. This album is an expression of the gospel."

As for how fans should react to this new genre of West music, reports suggest the rapper plans to focus on gospel music for the rest of his career. According to Andrew Barber of Fake Shore Drive, West reportedly revealed to the crowd in his hometown of Chicago that he planned to focus on “only gospel from here on out," meaning that he will no longer be making any secular music.

Fans who attended the events also got a sneak peek at the Jesus Is King film, which will also focus on West's time with Turrell at the Roden Crater installation, as well as his world travels. While it's not currently known how much longer fans will have to wait for the album, impatient fans are currently able to buy Jesus Is King merch on the rapper's site now. As Kardashian said on Friday, "have faith" that it will arrive soon.

More like this
Kanye West Has The Most Kanye Reaction To Kim Kardashian & Pete Davidson's Split
By Jake Viswanath
Kim Kardashian Pays Homage To Kanye West’s Fave Film In New Swimwear Pics
By Bustle Editors and Maxine Harrison
Are John Legend & Kanye West Still Friends? The Singer’s Latest Update Is Candid
By Brad Witter
Someone Must Pay For What Happens To Bad Bunny In 'Bullet Train'
By Arya Roshanian
Get Even More From Bustle — Sign Up For The Newsletter