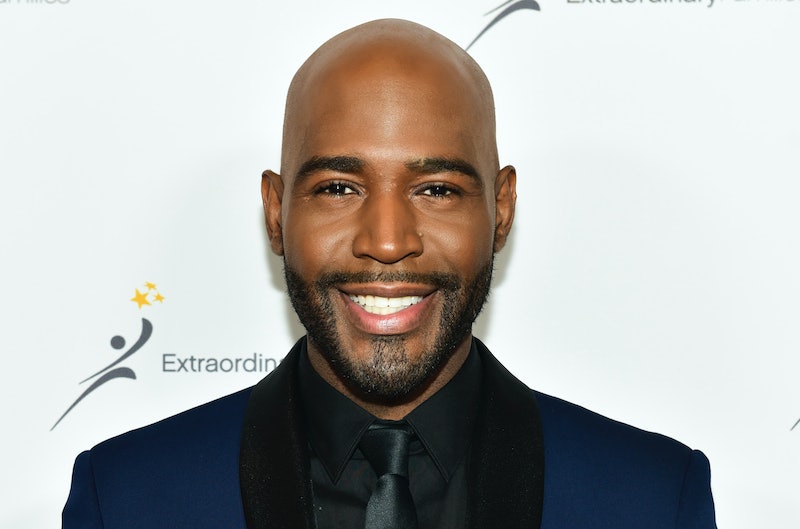 Exciting news, Queer Eye fans! Karamo Brown's memoir, Karamo: My Story of Embracing Purpose, Healing, and Hope, is coming to a store near you this spring, and you can pre-order it today from your favorite bookseller. This is the first time the Queer Eye life coach has told his life story in full, so you're going to want a copy of Karamo's memoir in hand when it comes out on Mar. 5!

Karamo Brown made a splash with the other four members of the Fab Five with Netflix's reboot of Queer Eye — based on the Bravo original, Queer Eye for the Straight Guy — in 2018, but that wasn't Brown's first appearance on reality TV. In 2003, the Houston native appeared on the heterosexual dating show The 5th Wheel, and followed that up with his tenure on The Real World: Philadelphia in 2004.

On Queer Eye, Brown has displayed a knack for talking to the Fab Five's makeover subjects about their personal lives, and he often takes these opportunities to share a little about himself. In May 2018, the star told Parents.com about his journey to fatherhood, which began when his son was 10 years old, and which involved assuming legal guardianship over the boy's younger brother. Brown's sons were ages 21 and 17 at the time of his interview with Parents.com.

'Karamo: My Story of Embracing Purpose, Healing, and Hope' By Karamo Brown
Amazon

Although it's clear that Karamo Brown is no stranger to opening up about himself, Karamo: My Story of Embracing Purpose, Healing, and Hope is the first time the reality star-turned-memoirist has had a platform to share his entire life story. That story involves growing up Caribbean-American in white, Southern neighborhoods; attending Florida A&M University, an HBCU; becoming a social worker and activist; and raising two sons as a single, gay father. According to the publisher's copy, the memoir will "explor[e] how the challenges in his own life have allowed him to forever transform the lives of those in need."

Karamo Brown's memoir isn't the only Fab Five book to hit store shelves in 2019. Cooking coach Antoni Porowski's cookbook, Antoni in the Kitchen, is slated for release on Sep. 19. Fashion guru Tan France also has a memoir, Naturally Tan, due out on May 14. Last year, the Fab Five — which also includes Bobby Berk and Jonathan Van Ness — co-authored a coffee table book, Queer Eye: Love Yourself, Love Your Life.

Karamo Brown's memoir, Karamo: My Story of Embracing Purpose, Healing, and Hope, is coming to a store near you on March 5. You can pre-order it today from your favorite bookseller.