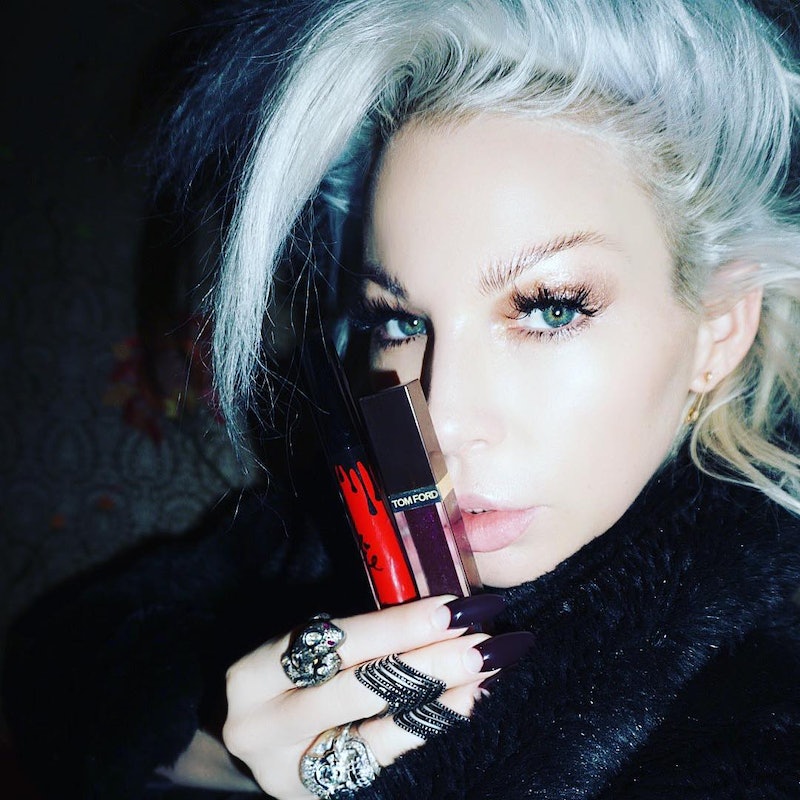 Joyce Bonelli/Instagram
By Shea Simmons
May 24, 2017

Few living celebrities have quite the iconic beauty status as the members of the Kardashian family. While some of them have their own skills — here's looking at your Kylie Jenner — they also depend on talented artists. Now, famous Kardashian makeup artist Joyce Bonelli debuted her own cosmetics line at the Cannes Film Festival on several well-known celebrities, and if their famous faces are any indication, Bonelli's new makeup line is going to be a huge hit when it officially lands on shelves.

While basically every celebrity on the Cannes red carpet looked stunning, stars like Emily Ratajkowski were rocking looks that were a bit different than others. Not only was Ratajkowski's makeup gorgeous because it was done by Bonelli, but the secret to the look was that she was actually wearing Joyce Bonelli Cosmetiqués.

This may not be the first time fans are hearing of Bonelli's venture in the world of cosmetics. Only roughly a week ago, Bonelli took to her Instagram account to post an image of herself in what appeared to be a lab with the hashtag "#joycebonellicosmetiqués." Now, fans know that Bonelli hasn't just been crafting her products, they're face ready, and they graced the faces of some serious stars at Cannes.

During the Cannes Film Fesitval, Emily Ratajkowski was seen in the newly minted brand not once, but twice. Ratajkowski's first look was inspired by the iconic Sophia Loren, and it was Bonelli's brand — and Bonelli herself — who helped her achieve it.

About the look, Bonelli tells me, "To soften Emily's features and draw attention to her cheeks, I evened out her complexion with my new Joyce Bonelli Cosmetiquès H8R Shield Foundation...Then, to create the cheek contour, I used Joyce Bonelli Cosmetiquès blush in the shade 'Spank Me Cheeks' which I'm obsessed with. I finished with my Sitting Pretty 24/7 Highlight at top of her cheekbones, bridge of her nose and upper lip."

Clearly, the look was a stunning homage to the icon, but it wasn't Ratajkowski's only look using Joyce Bonelli Cosmetiqués.

Ratajkowski's second look was more liner focused, and it was just as stunning as her previous Sophia Loren inspired look. Bonelli says, "For this darker, more sultry look I wanted to create a contrast by using a black cat-eye and darker, neutral lip against smooth bright skin...As the base, I used Joyce Bonelli Cosmetiquès H8R Shield Foundation and to create the long, dark liner wing I used my new favorite toy; the Joyce Bonelli Cosmetiquès Latex Liner in Blk."

Clearly, Joyce Bonelli Cosmetiqués is well on its way to being a must have for both celebrity makeup artists and the casually cosmetics obsessed. If Ratajkowski's looks are any indication — and they certainly seem to be — the brand will quickly be one of the most beautiful on shelves.

Bonelli was exceedingly happy to show off her hard work via Ratajkowski and other famous celebrities like Nicki Minja, but its seeing the line put to use through other makeup artists and customers that seems to be even more exciting. "I can't wait for the launch of Joyce Bonelli Cosmetiqués and can not be happier that I got to showcase my line for the first time on Emily Ratajkowski, Eva Longoria, Jourdan Dunn, Nicki Minaj, and Joan Smalls in Cannes, this year," she tells me. "I'm so excited to see how everyone else gets red carpet ready using the line after its official launch."

As for when the launch will be, that's still unclear. What's not unclear, however, is that Joyce Bonelli Cosmetiqués appears to be truly stunning. Developed by a talented artist like Bonelli, though, that's really no surprise. Now, it's time to cross our fingers for a speedy release and some extra cash for shopping.