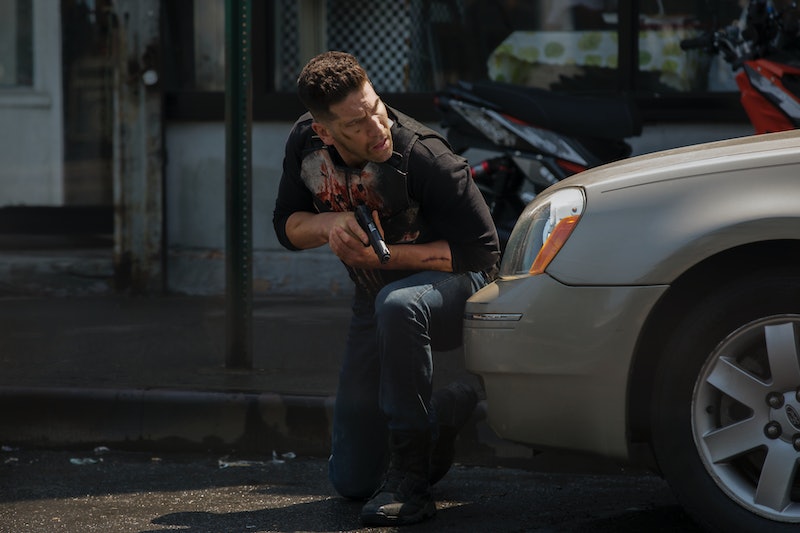 Spoilers ahead for The Punisher Season 2. Punisher fans have been looking forward to seeing their favorite murderous veteran come back for another round alongside established characters like Agent Madani, Billy Russo, and Curtis Hoyle. But, Kastle shippers are always on the watch for a Karen Page appearance. In Season 2, Karen Page randomly appears after Frank was seriously wounded by Billy’s crew. The unlikely pair developed an undeniable romantic chemistry after meeting in Daredevil Season 2 and established a bond despite her objections to Frank’s frequent murder sprees. But, Karen Page & Frank Castle's Punisher Season 2 conversation suggests that their story has come to an end.

In Episode 11, Karen rushes to Frank’s bedside hearing about his hospitalization and pending murder charges to check on him and offer legal assistance. He admits to killing three women, which is against his moral code, and advises Karen to walk away because she cannot fix this situation.

But, Karen insists that his actions would never change how she feels about him, which makes him scoff as he replies that it should make a difference. Karen stays by his side, sympathizing with him as he tearfully reveals details from his continuing nightmares about Maria and the kids’ deaths. He connects that pain with his guilt over killing the women while Karen gently holds his hand. And, if you listen close enough, you can hear the audible sighs from Karen/Frank shippers who are feeling all the feels.

But, the moment is interrupted by Amy and Madani, who fill Karen in on Frank’s recent activities as well as the bounty on his head. Karen jumps into action and discovers that Frank didn’t actually kill the women victims. She reports back to Frank and he orders Madani and Amy out of the room so they can have a private chat. He tells her that she has to walk away and have a better life.

“You gotta walk away now Karen. Come on, Karen. Look, I know you. All right? You’re brave. You’re strong. But you are so godd*mn stubborn, and you will throw everything away for me, and I cannot let that happen.”

Despite Frank’s plea, Karen says there is a way for them to figure everything out together and asks him to choose love instead of war. He says he can't allow himself to make that choice because his life is about righting wrongs via murder. In the end, Frank thanks her and says she can’t walk out by his side as they almost embrace each other. But, the possibility of a heartfelt hug (or a kiss) never comes to fruition because Frank has to evacuate the premises immediately lest he wants to be die.

Karen isn’t seen any more after helping with Frank’s escape plan, so it can be assumed that she will continue working for Matt Murdock and try to move on with her life. It’s a heartbreaking blow for fans who hoped they would fall in love, but a happily ever after ending just wouldn’t fit a character like Frank Castle.

Actor Deborah Ann Woll’s recent Instagram post also suggests that this will likely be the end of Karen Page’s story. She said she already misses portraying the character and hopes The Punisher will somehow come back for Season 3, which isn’t likely considering Daredevil and Luke Cage’s cancellations last year.

Thankfully, Karen’s story ended without a questionable cliffhanger concerning her relationship with Frank. If this is truly the end, then hopefully Karen is somewhere in the Marvel universe living her best life.