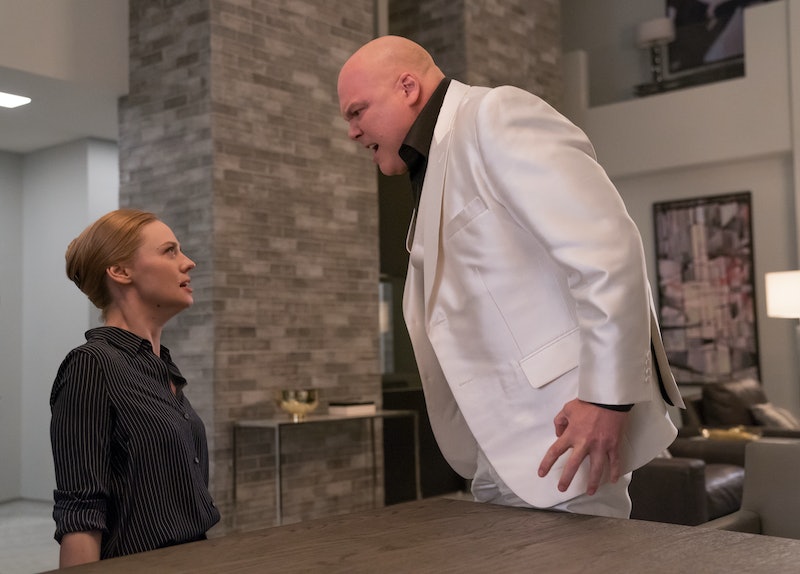 Spoilers for Daredevil Season 3 ahead. In Marvel comics, Karen Page falls victim to a lot of problematic tropes — but the Netflix adaptation has done its best to make her a complicated hero on her own journey. Her fate may be tied to Matt Murdock, but she controls her own destiny. Does Karen die in Daredevil Season 3?

Shrewd fans may have noticed that, due to the Devil of Hell's Kitchen rising from the dead, Season 3 bares a striking resemblance to the "Born Again" storyline in the comics. However, the introduction of Sister Maggie and Benjamin "Dex" Poindexter (also known as Bullseye) may have concerned fans more that the Netflix series is adapting the "Guardian Devil" arc instead. In Daredevil Volume 2, Issue 5 (written by Kevin Smith) Karen is killed by Bullseye, who had thrown Daredevil's billy club at Matt with lethal precision in a church. Karen dies in his place. Her life insurance policy helps Foggy and Matt rebuild their law firm, but she's gone.

This whole scene does happen on the Netflix series, in Episode 10, just with a different ending. There is a fight in a church. Bullseye is there. However, Bullseye is actually ordered by Fisk to kill Karen as revenge for James Wesley's death. In the comics, Bullseye has been hired by a character named Mysterio to capture a fated baby. Then, instead of Karen jumping in front of Matt's body, Father Lantom jumps in front of Karen's body. He sacrificed himself to save Karen, and his parish, and make amends for the way he lied to Matt and kept him from his birthmother.

Thankfully, Karen does not die — in the scene that pays homage to her comic book downfall or later in the season. Karen even cradles Matt's body in a way that evokes the panel where Matt holds her, lifeless. She's not kidnapped, or tortured, or used as leverage.

None of the women in Daredevil are used as leverage or a plot point, actually, though plenty of the men try, or want to project that onto them. Betsy doesn't need Melvin Potter. Julie can't "save" Ben from becoming Bullseye. Marci won't accept a marriage proposal from Foggy when it comes on the tail end of a traumatic near-death experience. Even Vanessa demands to be included in, not sheltered from, Fisk's criminal activities. When Matt threatens Vanessa in the Season 3 finale, he's threatening to put her behind bars, not hurt her to hurt Fisk.

Karen was forced to face a lot of her past in Season 3. She finally admitted to killing James Wesley in Season 1. She also told Matt how she was drunk, high, angry, and behind the wheel when her car crashed and her brother died.

Will she revisit Frank Castle after all this on The Punisher, or stick with Matt Murdock? At the end of Season 3, the law firm does reopen. However, instead of Karen Page's life insurance policy serving as a down payment, her name is going to be on the door. Fisk may still want her dead, but like Matt and Foggy, the Punisher, and even the "unstable" Jessica Jones, who gets a shoutout in the episode, Karen Page can take care of herserlf.

More like this
'Bridgerton' S3 Teases Exciting Social Season For Penelope Featherington
By Bustle
What Jen Shah's Delayed Sentencing Could Mean For The 'RHOSLC' Season 3 Reunion
By Brad Witter and Jake Viswanath
The First Trailer For 'That '90s Show' Includes So Many Nods To The Original Series
By Jack Irvin, Alyssa Lapid and Grace Wehniainen
You Definitely Know The Voice Of Shuri's AI In 'Black Panther: Wakanda Forever'
By Brad Witter
Get Even More From Bustle — Sign Up For The Newsletter