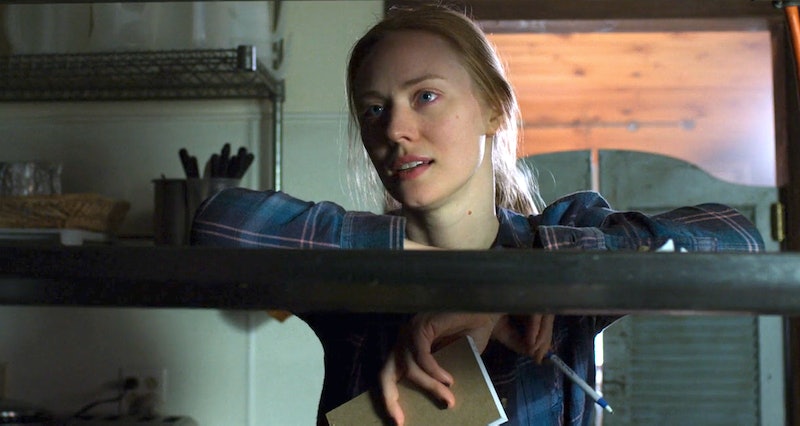 Spoilers for Daredevil Season 3, Episode 10. When Karen met lawyers Matt Murdock and Foggy Nelson in Season 1 of Daredevil, she seemed rather naive about the ways of the world. But Karen's backstory on Daredevil is revealed in the episode "Karen," and she had suffered trauma long before getting involved with Matt. After Bullseye's attack on the New York Bulletin, she calls her father to go back home to Fagan Corners, Vermont. But he denies his daughter's request. And in "Karen," Daredevil shows why Karen barely has a relationship with her dad and why she fled to New York City in the first place.

During her set-up date with Mitchell Ellison's nephew, Karen understandably becomes a bit emotional when talking about her deceased brother. She also seems triggered when she goes to the drug house to find Jasper Evans. In "Karen," Daredevil travels back in time and away from Hell's Kitchen to Karen's earlier days. She deals drugs with her boyfriend Todd to college kids after she deferred from Georgetown. When she's not partying, she works at her family's diner, Penny's Place, with her brother Kevin.

Karen feels responsible for keeping the diner afloat after her mother's death of cancer. And her father makes matters tough on her by making bad financial decisions, like purchasing a $5,000 grill that they can't afford.

But Kevin sends a letter to Georgetown so that Karen can get out of Fagan Corners and pursue her education. Except that she's in too deep with Todd and still angry over her mother's death to take this opportunity. She runs off with Todd and turns to drugs and booze to cope with her feelings. When Todd and Karen head back to his camper van, they see that Kevin has set fire to it as a way to keep Karen away from a drug dealing boyfriend. Todd brutally beats Kevin with a crowbar and Karen protects her brother by shooting Todd in the arm. The Page siblings then leave the scene with Karen driving them away.

However, Karen is high and drunk. And as she yells at Kevin for setting fire to the camper van, she runs the car over the guardrail. Karen survives, but her brother dies in the crash. The only reason Karen doesn't end up in jail is because the Fagan Corners police officer is a friend of the family and he lies to protect their family.

Karen's backstory shows why she wants to do good and pursue justice now. And also why can't go home and has to take Sister Maggie's offer of sanctuary. Unfortunately, by staying in the city, she has put herself at risk. She provoked Kingpin by confessing to killing James Wesley, so Fisk sends Bullseye to kill her at the church. Father Lantom dies protecting Karen and his parishioners, but not before giving Karen some sage advice on redemption. She may not have fully believed the priest, but before his death, he offers Karen the chance to forgive herself.

Karen's father is a character in the Marvel comics, so he could return to Daredevil someday. But until then, Karen will have to continue to live knowing that her father may not hold the same Catholic belief of redemption after she caused her brother's devastating death.