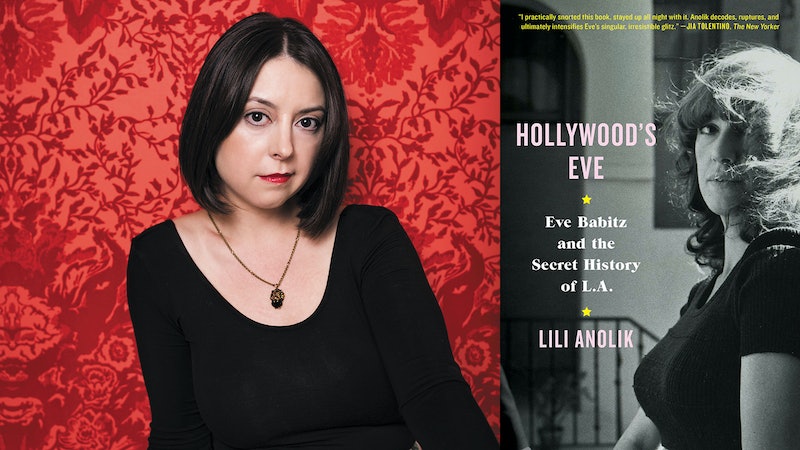 Each month, the Bustle Book Club asks an author to recommend a book they think everyone should read. For March, Seduction author Karina Longworth recommended Hollywood's Eve by Lili Anolik Follow along with the book club on Bustle and join the conversation on Goodreads.

For many, book clubs are essential because they provide a place and a community for discussion; for me, book clubs are necessary because introduce me to books I may not otherwise pick up. I get so caught up in my preferred genres — literary fiction, poetry, memoir — that (I'm sure) I often miss out on phenomenal works of nonfiction or short story collections. One book I may have missed is Hollywood's Eve, an account of the sensational life and career of writer Eve Babitz and a blazing portrait of Los Angeles, a city that I, a New Yorker, have never been particularly interested in learning about — hence why I didn't imagine I would ever read this book. But, on the recommendation of this month's Bustle Book Club judge Karina Longworth, I devoured Hollywood's Eve in a single weekend. I texted my friends pictures of the most shocking passages. I told people I barely know they must read it, as soon as they can, right now if possible! I decided I needed to read everything author Lili Anolik and her subject, Eve Babitz, have ever written.

The book comes recommended to you by Karina Longworth, the author of Seduction: Sex, Lies, and Stardom in Howard Hughes's Hollywood and host of the podcast You Must Remember This, both about the stories of forgotten women in entertainment. Hollywood's Eve is a perfect fit for Longworth: Babitz, the ultimate It Girl of '60s and '70s Los Angeles didn't just sleep with rockstars or design album covers; she wrote books. Good ones. Her writing was discovered by none other than Joan Didion, and she went on to produce seven books — all bold, brash, brave works of fiction that were actually confessionals and memoirs. But if you haven't heard of her, there's a reason why: Her writing was never truly embraced by the literary establishment, and in the '90s, a freak accident left her with burns on much of her body. She turned into a recluse, and didn't make herself available to the public until author Lili Anolik tracked her down in 2012, ultimately writing a story for Vanity Fair about Babitz, then this book.

"Like many a youngish woman interested in cultural history, celebrity and the sex lives of the mid-to-late 20th century fabulous, I’ve spent the past four years devouring the essays, memoirs and fiction of Eve Babitz — it girl of the 1960s Los Angeles art and rock scenes turned personal historian. Think Joan Didion (a friend and champion of Eve’s), but hot rather than cool, bustier and messier. Where Didion wrote about the “apocalyptic sex” of the Doors in the voice of a detached observer, Babitz wrote about actually having sex with Jim Morrison (in fact, it would be a fair criticism to say she wouldn’t shut up about having had sex with Jim Morrison—but would you?).

The collective Babitz rediscovery (or just plain discovery, for those of us born too late to have read her the first time around) owes to Lili Anolik. Anolik’s 2014 Vanity Fair profile of Babitz —who has been something of a recluse and has not published since a life-changing accident in the late 1990s — touched off a wave of reissues of books like Eve’s Hollywood and Black Swans. Now Anolik has published Hollywood’s Eve, a highly styled not-a-biography of Babitz that takes the form of a discursive love letter, sprinkled with jaw-dropping quotes and anecdotes about characters as disparate as Salvador Dali, Harrison Ford, and Don Henley. Anolik digs into the crevices unexplored or only alluded to by Babitz’s own writing, revealing much, including the tragedy that Eve’s screenplay about/commissioned by The Eagles, in which she skirted the assignment to write instead about a groupie a lot like herself, was never filmed. But, as a glimpse into a lost or forgotten slice of recent cultural and Los Angeles history, from the perspective of a sui generis woman, Hollywood's Eve is the next best thing."

Stay tuned throughout the month for an interview with Lili Anolik and more stories on the work of Eve Babitz.

Until then, start with Lili Anolik's Vanity Fair profile, pick up the book (and join the discussion on Goodreads), and be sure to pick up one of Eve Babitz's short story collections or novel — why not start with Slow Days, Fast Company? You'll be instantly hooked by the words of Eve Babitz.