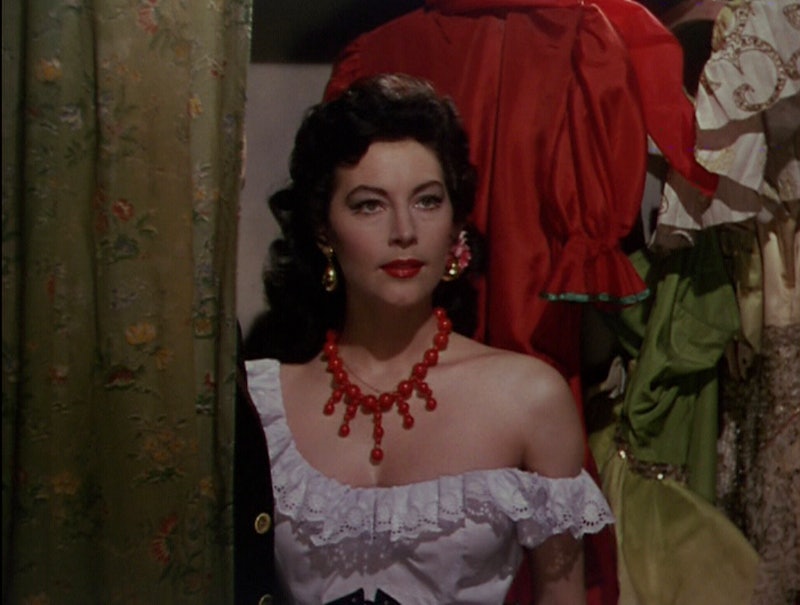 For a long time, I was not exactly what you'd call a "classic film buff." I could barely tell you the difference between Katharine Hepburn and Audrey Hepburn, until a few years ago, when a friend turned me on to Karina Longworth's hit film history podcast, "You Must Remember This." In each episode, Longworth doesn't just explain how classic films were made, she shines a light on the cultural issues that influenced them and the lives of the people who made them — including the many women who were marginalized in or left out of official film histories. In short, she gives people who don't think they care about classic films a reason to care about classic films. (Also, turns out there are a LOT of differences between Katharine Hepburn and Audrey Hepburn!)

This week, on an episode of the podcast The Bustle Huddle, I spoke to Longworth about her new book, Seduction: Sex, Lies, and Stardom in Howard Hughes' Hollywood. In Seduction, Longworth uses the well-known life story of millionaire industrialist and film producer Hughes as a jumping-off point to tell a story we don't know about women in early Hollywood. Examining the film industry from the 1920s through the 1950s, Longworth chronicles a world where women had shot at incredible professional and financial freedom, as actors, screenwriters, or even directors — and an equally likely chance at suffering through career-ruining contracts, degrading film studio demands, or simply the cruelty of a society that didn't see women as fully human.

Though the book's roots lie in a series of episodes on Hughes she did for her podcast, they also lie in an experience Longworth had after writing a previous book on Meryl Streep. "I was on this panel when the book came out... with these two men, white men in their 70s who were two of the top Hollywood biographers," she says on The Bustle Huddle. "On my panel, I wasn't allowed to get a word in edgewise. It was just these two old dudes talking about great old dudes and writing books about great old dudes. I just thought it was so boring. I guess I wanted to write this book for all the people that felt excluded by that being the bulk of film history and film writing."

You can learn more about forgotten female directors, how Longworth researched the book, and why so many women wanted to date a stone-cold creep like Hughes, on the podcast.

And if you'd like to learn more about the forgotten history of women in early Hollywood, read on for Longworth's recommended viewing.

This silent film, directed by Howard's uncle Rupert Hughes, is an early reaction to the idea of Hollywood as a den of sin. "In the early 1920s in Hollywood, there were all these sex and drug scandals," Longworth tells Bustle. "Ultimately, that would lead to film censorship, which was super bad for women, because it really cut down on the types of female experience that were legal to show on film."

"Rupert Hughes kind of saw this censorship coming and wanted to try to advocate against it, by making a movie about contemporary Hollywood that showed everybody in Hollywood being really wholesome, hard workers," she adds.

Enter Souls for Sale, based on Hughes' book of the same name, which argues that Hollywood filmmakers aren't morally compromised party monsters; they're actually the good guys. Heroine Mem impulsively marries a man, but immediately begins to second-guess her decision. "So, she jumps ship on their honeymoon. They're on a train, and she literally jumps off the train and ends up in the desert, where a film crew is shooting a movie," says Longworth. "She basically is taken away by the circus of the film industry, and finds that everybody is super generous and kind, nobody parties very hard and there's no such thing as a casting couch. Then, once she becomes a big star, her husband tracks her down and says, 'You are my property and I'm gonna take all your money.' And it turns out her husband is a serial killer. It's just this parable about how Hollywood isn't where the bad stuff is. The bad stuff is out there in the world. It's a fun meta-comedy about the late silent era."

An early starring role for Katharine Hepburn, Christopher Strong is also notable for being directed by Dorothy Arzner, who was among the most successful female directors of her era. "If people are not aware of these films directed by women [during] the first few decades of Hollywood," says Longworth, "this...would probably be first on my list of something I would suggest [they] check out."

Hepburn plays "an Amelia Earhart type aviatrix," who becomes romantically involved with a married man and, Longworth explains, "basically has to choose between being his mistress and having her independent career."

"During World War II, there was sort of a brief flash of feminist possibility, with women being forced to go to work when their husbands were at war," says Longworth. "Then, that period really ended when the war ended, and women were expected to go back into the kitchen and raise children while men reclaimed their jobs."

Kitty Foyle "anticipates that switch back to conservative values" with its story about a young working-class woman who dreams of marrying her true love, a high-society heir. But as the film goes on, heroine Kitty, says Longworth, "learns through horrible tragedy that she should actually just want to be a dutiful wife to a boring guy who will provide for her."

"As part of the horrible tragedy, she becomes pregnant and she vows that she's gonna raise her kid by herself — and then something absolutely terrible and punishing happens, which I won't give away. But the movie's view of what a bad idea it would be to be a single mother is really cruel," Longworth points out. "It's the cruelest depiction of that that I've seen, even from this era."

Star Ginger Rogers — who was, in Longworth's words, "an extremely conservative Christian person" — initially rejected the film offer after reading the book it was based on. "In the novel...the woman does not try to have the baby. She has an abortion. And when Ginger Rogers got to that part of the novel...she threw the book away and said, 'I will not participate in this filth and I'm not flattered that they thought that I would be interested in this.'"

"Then her mom, who was her closest advisor, was like, 'Don't worry about it, Ginger, they'll never be able to depict that in a movie. They'll change it. We'll make sure that the movie reflects our values,'" says Longworth. The film ended up winning Rogers an Oscar, and helping her show the world that she was more than Fred Astaire's dance partner.

Ida Lupino, one of the most prolific female directors of her era, both directed and starred in this movie about a businessman who secretly marries another woman behind his wife's back.

"What's fascinating about [The Bigamist]," says Longworth, "is that a movie from [the 1950s] could not say that a man like this is garbage, and that no woman should want to be involved with him. It couldn't say that in direct words — so the way the movie deals with that is that at the end, a judge is deciding what [the man's] punishment should be for bigamy and then [the judge] says to [his wives], 'You're gonna have to decide for yourself if you forgive this man.' The implication is, 'I allow you women to walk away from this garbage man.'"

But while Longworth singles this out as Lupino's most fun film as a director, she called Outrage, a film about a woman who survives a sexual assault, Lupino's "masterpiece." "Most of [Outrage] is actually about [the heroine] dealing with the trauma of that, and her exhibiting behavior that now we would understand as PTSD," says Longworth. "But when that movie came out, it got a lot of negative reviews, because film critics were like 'Why is [the heroine] behaving this way? Why did she just run away from home after she got raped? It's so weird.'"

"In the 1950s, the movie studios were trying to compete with television so they made a lot of movies that were these epics in Technicolor — long films that told these grand stories," says Longworth. Among the best known of those is Barefoot Contessa, which stars Ava Gardner as a nightclub dancer who is discovered and brought to Hollywood to become a star, but ends up suffering greatly. The film also has a character based on Hughes —"a cold millionaire who thinks he can buy a woman."

"Gardner, who was involved with Howard Hughes romantically off and on for almost 20 years, really believed that this movie was about her and Howard Hughes," says Longworth. "Hughes actually either didn't realize or chose not to do anything about [the movie's parallels to his life] until the movie was almost finished, when he demanded that the director make all these changes so that audiences wouldn't understand that it was about him."

Listen to The Bustle Huddle on Stitcher, Apple Podcasts, Spotify, and more.