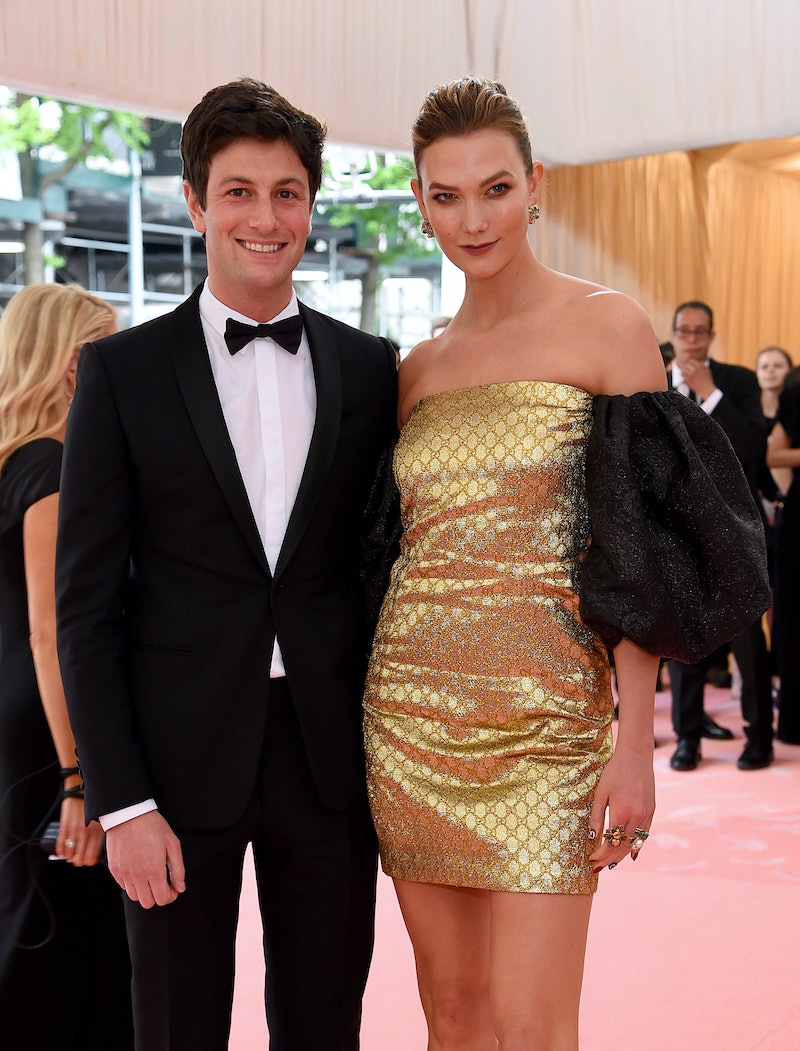 Eight months after they originally tied the knot, Karlie Kloss and Joshua Kushner are celebrating their marriage once again with another romantic ceremony. According to Us Weekly, Kloss and Kushner's second wedding ceremony had it all, including fireworks, friends, and even a few celebrity guests.

On her Instagram account, the Project Runway host showcased her lovely, and low-key, wedding festivities, which took place on a ranch in Wyoming from June 20 to June 23. In one snap from her Instagram Story, Kloss gave fans a glimpse at the rustic decor for the event aka the bride and groom's "Wild West Weekend." She also posted another snap on her IG Story of the fireworks display that all of the guests were treated to, which she captioned with, "best weekend ever. more later but for now [sleep]."

As previously mentioned, there were a couple of major celebs who came to support the second round of Kloss and Kushner's wedding festivities. According to Us Weekly, Katy Perry and Orlando Bloom attended the affair, and, as they showcased on Instagram, they totally leaned into that Wyoming ranch-based lifestyle. Bloom captioned a photo of himself and his fiancée and wrote a kind message to the bride and groom, "wonderful weekend of being loved and celebrating love, congrats to a beautiful union @karliekloss @joshuakushner ❤️."

These weren't the only photos that were shared from the fun-filled weekend. On June 24, Kloss posted even more photos from the festivities, including a snap that featured the husband and wife pair, along with various wedding guests (including Perry and Bloom), all dressed in chic bohemian and ranch-appropriate attire.

Her collage of photos also showcased the highlights from their "Wild West Weekend," including what looks to be a fun line dancing session and a horseback riding excursion. Interestingly enough, Perry and Bloom weren't the only major celebrities that you'd recognize from the event, as based on one of Kloss' photos, you can see that Mila Kunis also got in on the wild west fun.

In yet another IG snap, Kloss posted a photo of the newlyweds in their wedding day best, which she lovingly captioned with, "My cowboy 🖤."

Kloss and Kushner's second wedding celebration comes about eight months after they originally tied the knot back in October. As People reported, the couple wed in an intimate, Jewish ceremony in upstate New York. A source, who People claimed was a friend who attended the event, said that, “The wedding was intimate and moving. The couple was beaming with happiness." At the time, the publication reported that the newlyweds were eager to hold another ceremony to celebrate their marriage sometime in the spring (obviously, this came to pass during this past weekend).

The bride wore a stunning, custom-made Dior gown for the event. And luckily, the model gave fans a glimpse at the pair's nuptials, as she posted a snap from their big day and captioned the photo with a heart emoji and the date (Oct. 18).

Clearly, Kloss and Kushner had a blast during their second wedding ceremony. Between the celeb guests, the chic decor, and the fireworks, it's pretty easy to see why they had the best weekend ever.