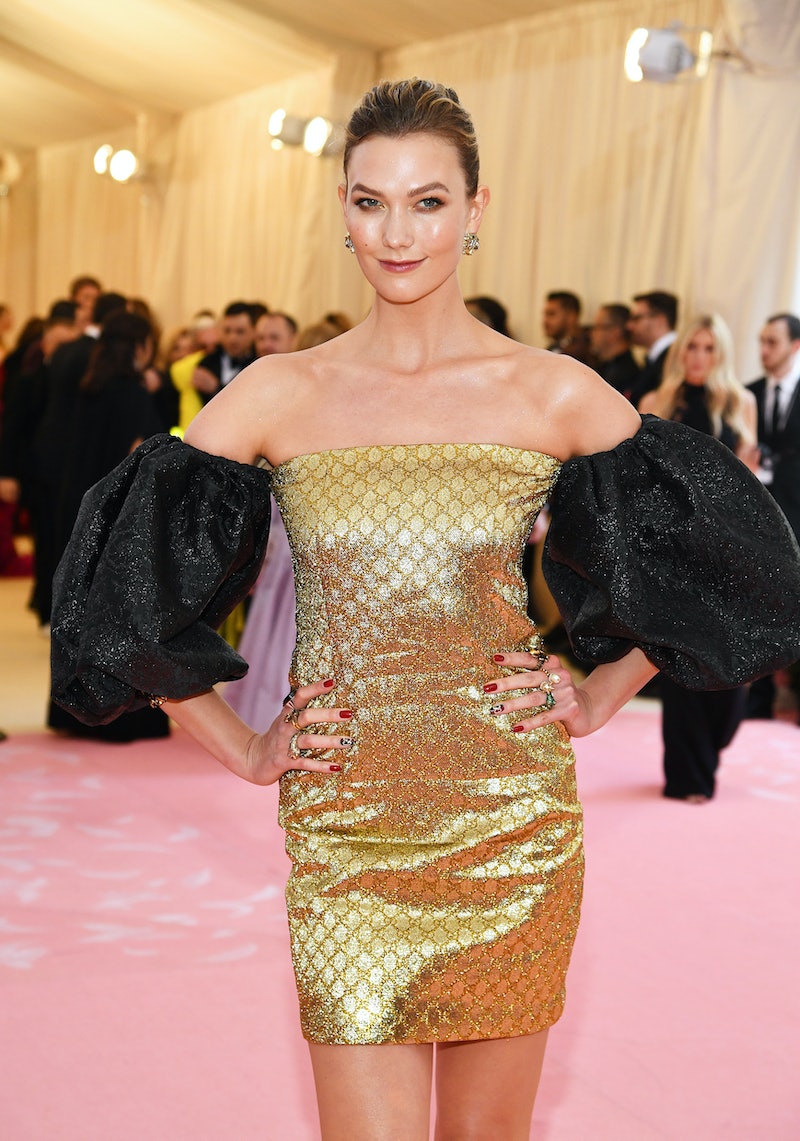 People really need to stop asking women if they're pregnant. Karlie Kloss shut down pregnancy speculation on Instagram on Tuesday, and she shouldn't have had to. Not only is it disrespectful to ask someone if they're having a baby, but to assume such a thing purely based on stomach size is absolutely insensitive. It's also a total invasion of privacy. If someone is expecting a child, they will let others know if or when they want to. Furthermore, just because someone may look like they're pregnant, doesn't mean they are, as Kloss recently proved.

On June 25, the Project Runway host shared an image on Instagram from her second wedding to Joshua Kushner. The lovely post showed the couple wearing cowboy hats and the model touching her husband's face as he leaned on crutches. She captioned the photo, "Lean on me [red heart emoji]." Based solely on this image, Kloss and Kushner are still very much in love and clearly had the time of their life during the celebration.

It seems all Kloss was trying to do was share a nice picture from their second wedding ceremony. Unfortunately, the focus was shifted to her having to defend her body and eating habits, while also shutting down pregnancy rumors.

An Instagram user commented on her post, "Pregnant?" Then, Kloss delivered an epically low-key straightforward answer that fans will applaud. She replied, "Not pregnant just love [french fries and angel emojis]."

Talk about a memorable clapback that was positive and shined a light on her love of french fries. Furthermore, Kloss made it clear that she likes to eat and she won't be ashamed of how her body looks as a result. Believe it or not, but when people eat sometimes their stomachs become bloated. That's right, a woman's stomach can also expand after eating, not just when carrying a child.

Like Jennifer Aniston wrote in a personal essay for the Huffington Post in July 2016 about the overall unfair treatment of women, including their bodies,

"I resent being made to feel 'less than' because my body is changing and/or I had a burger for lunch and was photographed from a weird angle and therefore deemed one of two things: 'pregnant' or 'fat.'"

Women's bodies are constantly scrutinized and it needs to stop. And as another person suggested on Kloss' post in response to the "Pregnant?" question, some women struggle to get pregnant so such an inquiry could have a negative affect. The Instagram user wrote,

"wow.....there is hardly anything to her, she has an amazing figure. So you gonna say that really?! lol even if she was its her buisness [sic]. What if she couldnt have children and it affects her? We need to stop asking women if they are pregnant or why they dont have children!"

By asking if an individual is having a baby could ultimately upset that particular person. That may not be the case with Kloss, but it's definitely a good point to make, especially in noting there could be negative aspects of asking a woman if she's expecting. The lesson here is to always be respectful when it comes to others, including a person's body and even more so regarding the pregnancy topic.

Like Kloss made clear in her brief response, she prefers to address such a ridiculous comment by highlighting her love for both french fries and her body no matter how it looks. She certainly handled the situation flawlessly.