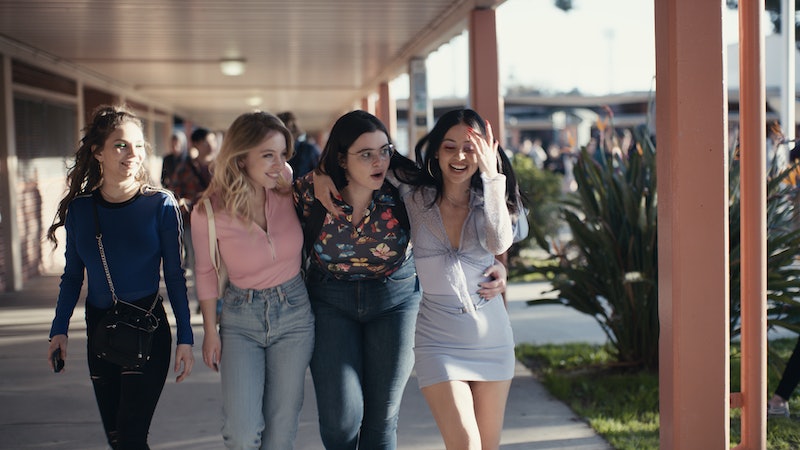 Spoilers ahead for Euphoria Season 1, Episode 3. It's easy to feel overwhelmed by HBO's Euphoria, which follows a group of misfit teens searching for intimacy and acceptance amid the cruelties and confusion of adolescence. It's been particularly brutal for the young women, with earlier episodes showing Jules (Hunter Schafer), Cassie (Sydney Sweenie), and Maddy (Alexa Demie) all being demeaned and experiencing uncomfortably rough sex (the fault of sex ed via Pornhub, according to Zendaya's Rue). So it's subversive that, long before the open forum of the internet — where men are free to comment on their bodies and leak their nudes — stripped and contorted their sexual agency, Kat (Barbie Ferreira) harnessed the very same medium to awaken her own.

In the show's June 30 episode, narrator Rue offers a window into Kat's life: she had a boyfriend when she was 11, but after sipping one too many piña coladas on vacation, she was dumped for being too chubby. Heartbroken, she found solace in the romances of Gilmore Girls, True Blood, and Scandal which featured, as Rue said: "Men who'd never leave her, disappoint her, break her heart. Real men whose love would spark, and ignite, and inspire."

For anybody who's ever obsessed over a TV show, movie, or band, Kat's shift to fan fiction feels like a natural extension of that passion. She becomes a prolific fanfic writer on Tumblr, spinning smutty tales of Emma and Hook in Once Upon a Time and slash fiction (male-on-male) of One Direction bandmates. In crafting these stories, Kat finds the love she lacks in her day-to-day life, both from her dedicated followers and in the fictional worlds she creates, where the men would never do something as utterly shallow as dumping someone they love just because that person gained a few pounds.

For someone like Kat, who regularly receives fatphobic comments from her peers, writing fan fiction is a way for her to feel love and also explore her sexuality without her body ever coming into the equation. "For many, fan fiction represents an important site of resistance, sexual exploration, and identity transformation," CSU Fullerton assistant professor Chelsea Reynolds told Mashable. "Imagine how mindblowing NC-17 fan fiction must be for ... someone whose family and social group doesn't approve of their sexuality."

We can see the stark difference in how Kat reacts to being told by the McKay twins that "fat girls give the best head" versus a reader sending her "ily slay kween! I picture you look just like khaleesi" in response to her writing. In the former, Kat appears to be praised, but her body is being objectified in a way that makes her uncomfortable, flattening her entire being to the simple category of "fat girl." In the latter, she's being appreciated for who she actually is: a skilled writer who has an endlessly creative, and yes, dirty, imagination.

In both cases, the person is only seeing one side of Kat, but the one where she's being celebrated, rather than negged, is clearly the more positive scenario. With her readers, Kat has found a way to form an intimate connection without having to be physical, which seems to be increasingly common for the always-online Gen Z.

Sure, fan fiction can be kinky and weird and shocking, but it's also an act of subversion, allowing young women to explore themselves with complete anonymity, without the judgement of their peers, and in a safe space. While Rue derided Pornhub as being the new classroom for men, fan fiction is portrayed on Euphoria as an arena that belongs primarily to Kat and other women, complete with flowery imagery reminiscent of Sailor Moon. Fanfic writers are often openly mocked on television — shows from Supernatural to Buffy the Vampire Slayer have all taken shots — so it's a pleasant surprise that Euphoria found a way to center a fangirl as one of the protagonists to root for.

However, that Euphoria makes Kat so likable and relatable is also what makes her transition into camming so frustrating. Many fanfics are popular because of their emphasis on mutual attraction, respect, and mutual pleasure, so it feels strange that Euphoria then suggests that Kat's obsession with those things are part of what makes her, well, a "loser." From the way it shows Kat picking food out of her teeth while she writes to creating the Harry/Louis animation that, while beautiful, seems designed to mock, Euphoria cements the idea that what Kat was doing before her Pornhub debut was immature. Then, she was a young, naïve girl; now, Euphoria implies as Drake's "Nonstop" plays over a video of her twerking, she is becoming a woman.

This feels like the wrong message to send. Kat's writing has always been a way for her to literally control the narrative. Unfortunately for her, camming moves her from the fantasy world back into the real world, where the requests of men can easily turn into demands and even doxxing (as it has in real life for many cammers). Both offer a sort of online-only intimacy, but only one can provide her with anonymity and safety.

Kat began by navigating her sexuality through a different outlet than most of her peers, but one that for many people, is quite real, and much less talked about. Camming still exists in a digital space, but it feels like a move in the opposite direction — toward the same objectification that drove her to fanfic in the first place. Hopefully, the show will dig more deeply and thoughtfully into this storyline in future episodes; Kat's interior world seems far more interesting and sexy than an external one only interested in fetishizing her.