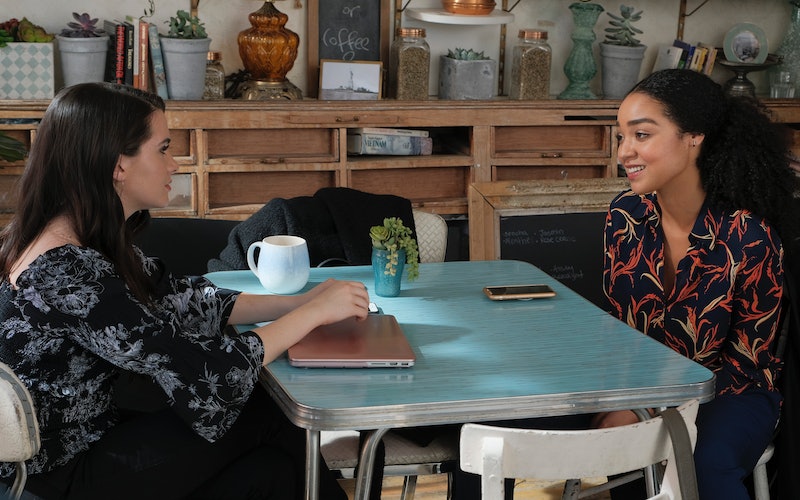 Spoilers for The Bold Type Season 2 Episode 5 ahead. There’s not much that The Bold Type won’t touch — in just one season plus a few episodes, the show has delved into everything from the BRCA cancer gene to the nuances of sexual relationships between women to the politics of relationships at work. We’re covering a lot of ground here, and that’s important. The Bold Type is a show that really understands millennials and the myriad of problems that the world has dumped on our collective doorsteps. In order to fix those problems, well, we have to recognize them, and that’s why Kat and Jane really get into it over how the world has either rewarded them or screwed them over. The Bold Type's discussion of privilege can help people acknowledge and change the way they react to their own initial biases.

It starts when Jane, who lost her job in the Season 2 premiere episode, is up for a new job at a great new publication (Pinstripe put her up for it, which is a whole other can of worms the show hasn’t quite opened yet). After a night of drinking with the girls, Jane gets a call from Pinstripe telling her that, although everyone loved her, the hiring managers are making a play toward diversity, and she’s not going to get the job. Enter Kat calling Jane out for not wanting to give a job to someone who wouldn’t ordinarily get a shot at one, and the two fighting about it.

Later, the two speak about privilege again, and Jane brings up the fact that yes, Kat is half black and half white, but she also lives in a loft apartment that her parents pay for. If Jane doesn’t get a job soon, she will have no money. If she gets hit by a cab on her way out the door, she doesn’t know what will happen, since she has no insurance and nothing to fall back on.

Here, both Jane and Kat are right — Jane feels like she should have gotten a job that she was well qualified for and desperately needed, and Kat feels that it’s important to diversify workplaces with people who have different voices. That’s what Kat is working on with her own team, going to bat for an applicant who has great engagement, a great social voice, and no college degree, because she had to drop out and quit school because it was too expensive. For Kat, it’s important to give people opportunities — like the job at Scarlet — they wouldn’t otherwise have because of life circumstances or the color of their skin. Life is full of different circumstances for different people, and these circumstances don't negate intelligence or worth.

Kat eventually recognizes that she has the privilege of family money to keep her afloat. Jane sees that it’s the color of her skin that has helped open doors for her. Jane can feel affronted that she didn’t get the job because of a push for a more diverse group of employees, but it is ultimately a good thing. Big picture, the more voices represented in the world, the more opportunities for more voices, which means that Jane can tell more stories. And while Jane is working on herself, Kat knows that her financial status has kept her fearless, since she doesn’t have to worry about losing money if she loses a job, and she sees Jane’s point and desperation to get a job.

The Bold Type boils it down to this — most people in this world are privileged in a certain way. It could be the gender we identify with, our socioeconomic status, our sexuality, or the color of our skin. And while broadening the pool of applicants for a job or a house or a college makes things more competitive, it also pushes us all to be better, and, most importantly, the world to be a fairer place. Some people just need a chance, and by the end of the episode of The Bold Type, both Kat and Jane see that they need to refocus their energies and recalibrate their opinions when it comes to privilege.

More like this
UK Viewers Will Have To Wait To Watch The Handmaid’s Tale S5
By Maxine Harrison
'Reservation Dogs' Season 3 May Finally Mend Bear & Willie Jack’s Relationship
By Gretchen Smail
Glenda Cleveland Died 2 Decades After Trying To Turn In Neighbor Jeffery Dahmer
By Brad Witter
'Grey's Anatomy's New Intern Got Advice From Dr. Bailey Herself
By Grace Wehniainen
Get Even More From Bustle — Sign Up For The Newsletter