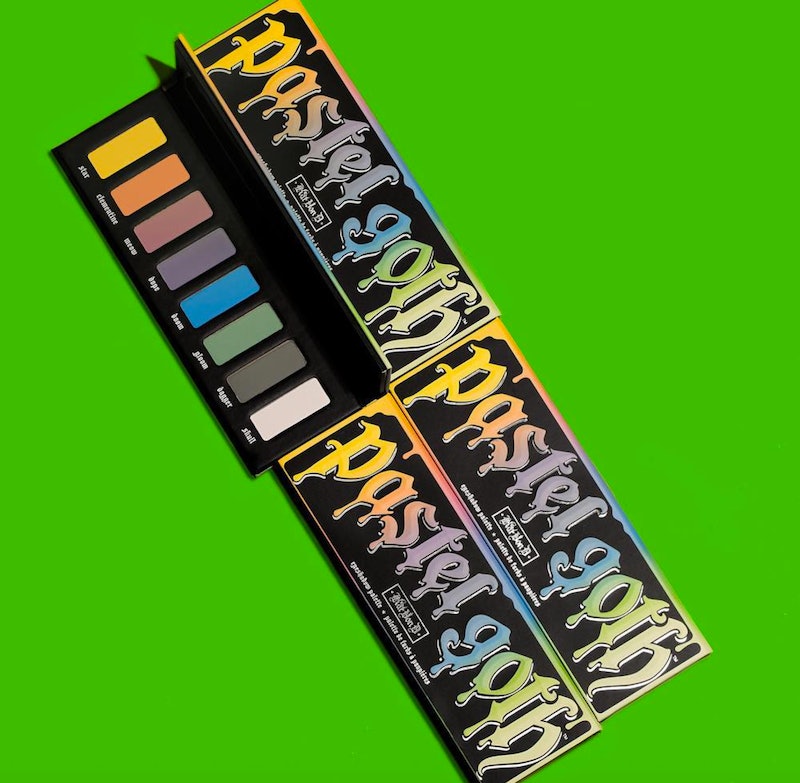 Some things aren't meant to last, but the limited edition nature of said things makes them even more special. Kat Von D's Pastel Goth Eyeshadow Palette features eight pans of soft peach, blue, yellow, and green shades and is the palette that most Kat Von D-evotees never thought the brand would do. The palette is sold out at Sephora.com. Despite veering away from her usual dark, edgy, and rock 'n' roll aesthetic, the palette has proven to be a hit.

The palette, which costs $38, so that's less than $5 per pan of shadow, will be available again at the Kat Von D Beauty site later this month. The brand did not confirm the exact date of the restock, instead only noting supply would be replenished.

So if you missed this palette and wanted to add it to your stash, you will be able to scoop it up before it goes bye bye. It's not often that KVDB does a palette loaded with pale peach, heather gray, and pastel blue. But the rich, matte pigmentation is fire.

The brand recommends signing up for the newsletter to get an email alert when Pastel Goth returns for its swan song. That's not a bad idea, since you will remain informed and in the know about other KVDB launches.

Here it is in black, white, and pastel goth. You have one more chance to nab this unique palette if pastel goth is your thang.

It's so cool, right? The lettering matches the colors inside.

Check out that mega matte pigmentation! I think Dope and Dagger would pair beautifully. Since I personally tend to gravitate towards browns and blacks when it comes to eyeshadow, the rest of the shades in Pastel Goth would be accent colors for me. And what about you?!

These mattes have such saturated color. Pastel is anything but low key with this palette. The grand finale is coming, so pay attention!