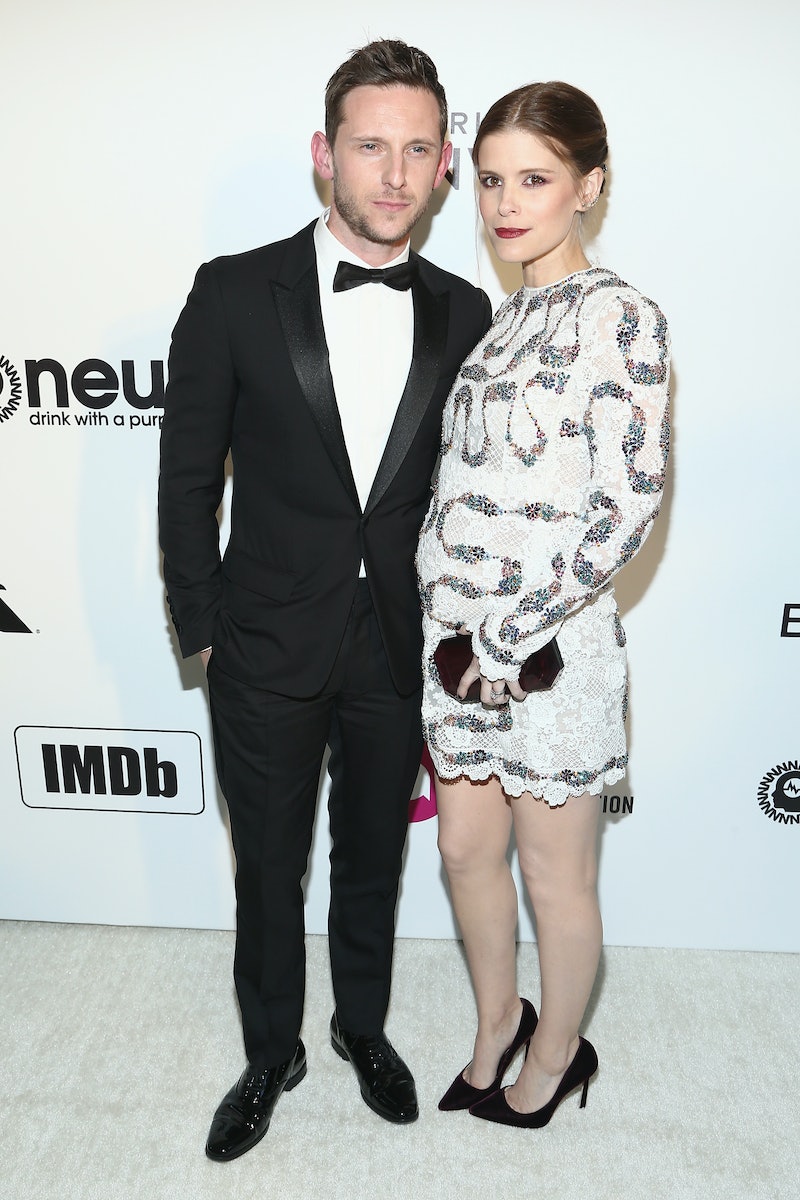 In the midst of all of the Oscars excitement on Sunday night, one actor had exciting news to share. It's official: Kate Mara is pregnant. After months of rumors, the news has been confirmed that Mara and husband Jamie Bell are expecting their first child together, and while she has yet to share any specific details about this new development in her life, the bump speaks for itself.

As People pointed out, Mara debuted her baby bump for the first time at Elton John's AIDS foundation Oscars party — and without commentary, which makes sense, since she's a pretty private person when it comes to her personal life. However, she did share one of the photos from their night out on her Instagram, writing, "Went on a date with our bun in the oven." No new details there, but pretty adorable nonetheless.

And Mara's stylist, Johnny Wujek, also reposted one of the photos of Bell and Mara at the party on his Instagram with a few words of his own, sharing his excitement about Mara's baby to be.

"We’re having a Baby. My love @katemara rockin @giambattistavalliparis and the cutest baby bump I’ve ever seen," Wujek wrote. "Oh & Hi Jamie, you handsome devil you."

Although this baby will be Mara's first child, Bell isn't new to fatherhood. Bell has a 5-year-old son with his ex, Evan Rachel Wood, so he's already been around the baby block before, but it's still so exciting that this will be their first kid together.

Rumors that Mara was expecting first began to surface in January, when Page Six first reported her pregnancy. At the time, the site claimed that Mara was five months pregnant and had reportedly been overheard telling Emily Blunt the news as they waited in line for the bathroom at the 2019 Golden Globes. Of course, since Mara herself hasn't shared any details about her pregnancy yet, it's hard to say if there was any truth to this earlier report, but maybe she'll fill fans in at some point down the road as her journey toward becoming a new mom continues.

Bell and Mara tied the knot back in 2017, and not long after they made things official, Bell told Evening Standard that he knew right away that he wanted to spend the rest of his life with her.

"There was an instant connection, like we’d known one another forever," Bell said. "It was obvious very quickly that we were going to get married."

And after spending time with her family, he said it's something he really admires, which will only get sweeter now that they're adding to it with a baby of their own. "They’re an incredible family, so loving, connected and together. They’re functional," Bell added "It’s kind of an amazing surprise to know that stuff really exists. I come from a broken home... But to see parents who are together, who have raised four children, with no sign of splitting up, is a joy to watch."

Congratulations to Mara and Bell — and, as Mara put it, their "bun in the oven." It seems like they have a lot to look forward to this year for sure.