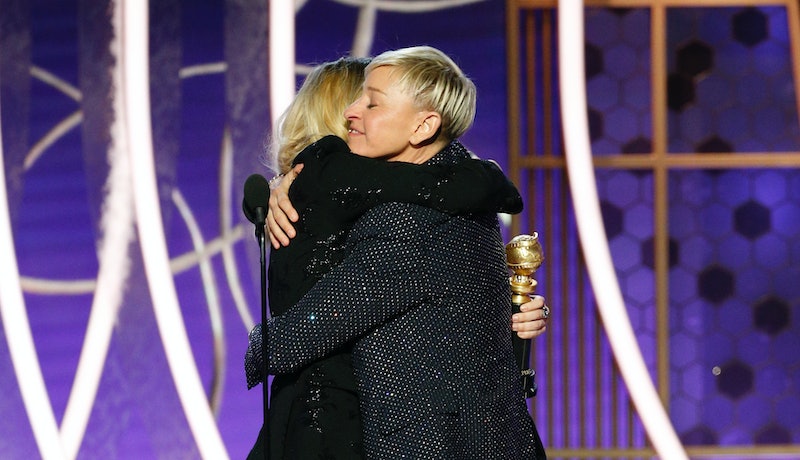 While the Golden Globe Awards is first and foremost a celebration of the awesome TV and film from the previous year, important issues of the day always find their way into speeches and awards dedications. The 2020 ceremony was no different as stars drew attention to topics such as the horrendous bushfires in Australia and abortion rights. One TV legend was also honoured for her work over the years and Kate McKinnon thanked Ellen DeGeneres for making it “less scary” to be gay when she was growing up. DeGeneres is one of the most well-recognised LGBTQ faces in show business and was honoured at the Golden Globes for her work in paving the way to increased acceptance and celebration of the LGBTQ community.

DeGeneres won the Carol Burnett Award for Achievement in Television, an honour that is given to someone for “outstanding contributions to television on or off the screen.” Saturday Night Live and Ghostbusters star Kate McKinnon took to the stage to introduce DeGeneres and welcome her to collect her award. McKinnon said, “In 1997, when Ellen’s sitcom was at the height of its popularity, I was in my mother’s basement, lifting weights in front of the mirror thinking, ‘Am I gay?’ And I was. And I still am. But that’s a very scary thing to suddenly know about yourself. It’s sort of like doing 23andMe and discovering you have alien DNA. And the only thing that made it less scary was seeing Ellen on TV.”

McKinnon went on to praise DeGeneres' for her courage and to show her impact. “Of course, attitudes change, but only because brave people like Ellen jump into the fire to make them change,” she added. “And if I hadn’t seen her on TV, I would’ve thought, ‘I could never be on TV. They don’t let LGBTQ people on TV.”

DeGeneres had a longstanding stand-up career and in 1997 she came out on her show at the same time that her character did. This wasn’t without repercussions. A year later, the show was canceled. She’s been open about the fact that, while her coming out was pioneering, it wasn’t easy. Speaking to Dax Shepard on Armchair Expert, she said, “Everybody assumed I was just nonstop talking about it. It hurt my feelings. I was getting jokes made at my expense on every late-night show, people were making fun of me. I was really depressed.”

DeGeneres was teary as McKinnon said, “Thank you, Ellen, for giving me a shot at a good life.” The Carol Burnett Award is not only for phenomenal entertainers but also those who have an extraordinary impact, and DeGeneres' win celebrates how she has inspired so many and encouraged so many more.

More like this
Armani Jackson Is Following In His Famous Actor Sister’s Footsteps
By Catharina Cheung
Vanessa Bauer Is Reportedly Dating Her 'Dancing On Ice' Partner
By Darshita Goyal
Con O'Neill Was Connected With Sarah Lancashire Long Before 'Happy Valley'
By El Hunt
'Bridgerton' S3 Will Show A *Very* Different Side To Kanthony
By Sam Ramsden
Get The Very Best Of Bustle/UK
Sign up for Bustle UK's twice-weekly newsletter, featuring the latest must-watch TV, moving personal stories, and expert advice on the hottest viral buys.