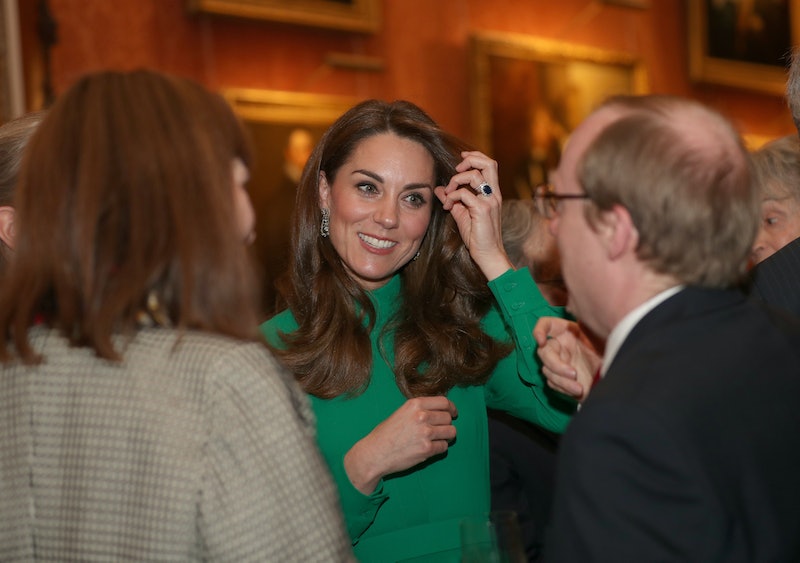 Kate Middleton has the style world on speed dial. From Gucci gowns to bespoke Katherine Walker coat dresses, the Duchess of Cambridge's style options are enviable. As it turns out, her jewelry options aren't too shabby either. Kate Middleton borrowed the Queen's diamond earrings for her recent appearance at the NATO reception for world leaders. Because if the Queen is your grandmother-in-law, who needs to go shopping.

According to Harper's Bazaar, the Duchess of Cambridge attended the NATO reception at Buckingham Palace in both a familiar designer and a familiar set of earrings. For the event, Middleton wore a long sleeve, emerald dress from Emilia Wickstead, one of her favorite designers. She paired the frock with what may also be a jewelry favorite, the Queen's earrings. The diamond, tear-shaped pieces are difficult to ignore with their drop design and inlaid jewels, and they were the only piece of jewelry (other than her engagement ring) that the Duchess chose to wear for the occasion. It wasn't her first time donning them, though.

Middleton was originally seen wearing the diamonds back in 2017 while at Kensington Palace for a gala dinner for the Anna Freud Centre, an organization which helps support mental health services for children. While this pair was a rewear for the Duchess, she seems to have a fondness for many of the Queen's earrings.

The diamond drop earrings from the NATO reception are not the only earrings Middleton has borrowed, and they're also not the only pair she's worn more than once. Back in November, Middleton attended memorial services with the Queen in honor of Remembrance Day, and for the event, she borrowed her grandmother-in-law's Bahrain pearl drop earrings. It wasn't her first time wearing them. In June, Middleton attended the Trooping the Colours parade in honor of the Queen, and chose to borrow the same pearl earrings for the event.

Middleton, however, isn't the only member of the royal family who is able to borrow from the collection of jewels. Meghan Markle has also worn pieces from the family's stores of jewelry with nearly all of her chosen pieces previously belonging to her late mother-in-law.

Perhaps Markle's most notable borrow is the aquamarine ring that once belonged to Princess Diana. Like her sister-in-law and the earrings, when Markle likes a piece, she seems to have no issue wearing it more than once. She donned Princess Diana's ring first during her wedding reception and again while on royal tour in Fiji.

While Middleton could likely call in whatever designer jewelry she wished to wear, her grandmother-in-law's royal collection seems like the better option.