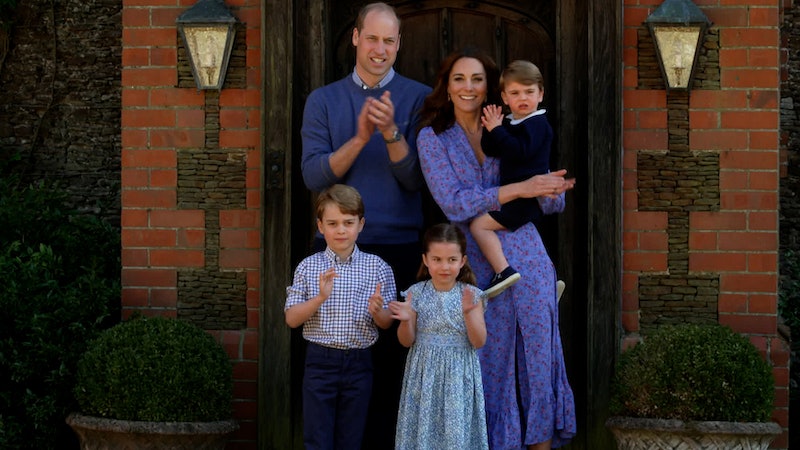 The Duke and Duchess of Cambridge don't often share family portraits, but in honor of Prince William's 38th birthday, Kate Middleton posted a new family photo. The picture, which was posted on the Kensington Royal Instagram account, shows William on an outdoor swing with his three children: Prince George, who is 6, Princess Charlotte, who is 5, and Prince Louis, who just turned 2.

On Saturday, the Kensington Royal account shared the sweet photo on Instagram, writing, "The Duke and Duchess of Cambridge are very pleased to share a new picture of The Duke with Prince George, Princess Charlotte and Prince Louis ahead of The Duke’s birthday tomorrow." The caption also noted that Middleton took the photo.

The portrait wasn't the only tribute the royals shared in honor of William's birthday (which happens to fall on Father's Day). On Sunday, Kensington Royal posted an adorable photo of the kids piling on top of Prince William in the grass, writing, "Thank you everyone for your very kind wishes on The Duke of Cambridge's birthday today!"

Due to the coronavirus pandemic, the Duke and Duchess of Cambridge have been self-isolating at their country home, Anmer Hall, in Norfolk, where both of the family portraits appear to have been taken, as per People.

In June, William and Kate, who have spoken candidly about prioritizing family amid the pandemic, made their first public appearances in several months, per People. Prince William visited a family-owned bakery, Smiths The Bakers, in an effort to support local business, and reportedly said that his kids have been enjoying spending time in the kitchen, as per The Belfast Telegraph. "The children have been attacking the kitchen and it’s just been an explosion of flour and chocolate everywhere," he said.

William and Kate have also made giving back a family effort amid the pandemic. On June 6, the Kensington Royal account posted a photo of Prince William volunteering with Prince George and Princess Charlotte, writing that the whole family "packed up and delivered food parcels" to, "isolated pensioners in the local area."

It's clear that the royals have prioritized family time amid the pandemic, and as evidenced by Kate's joyful family portraits, it seems like William's birthday is giving the family of five yet another reason to spend quality time together.