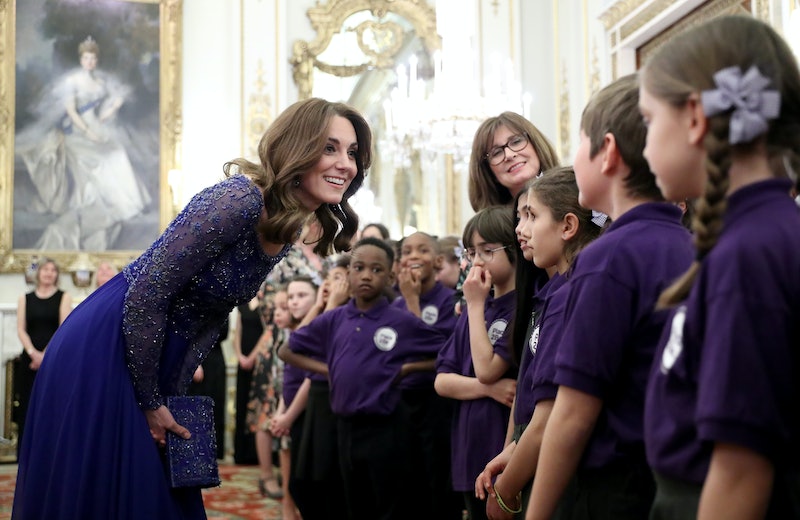 Over the last decade the Duke and Duchess of Cambridge have supported many charities. They championed the Heads Together campaign with eight mental health charity partners and Kate, the Duchess of Cambridge has made early years care and issues related to children’s mental health and emotional wellbeing a priority. It’s for this reason that Kate Middleton hosted a grand reception for children at Buckingham Palace on March 9.

The Duchess of Cambridge welcomed children and staff from the New North Academy in Islington, Salusbury Primary School in north west London, and Cranbrook School in Kent to mark the 25h anniversary of children's charity Place2Be. Middleton has been an advocate and patron of Place2Be since 2013 and over the years has met many of the children, families, and schools that the charity helps. According to the Evening Standard, Middleton told guests: “you taught me the importance of creating safe and nurturing environments within schools, embracing a holistic view of emotional wellbeing which permeates through the whole school system. You also taught me that it’s the simplest things that make a difference to children. It’s the quality time that is spent with them. It’s the time you take to listen to them. It’s trusting relationships that have the most profound impact on the emotional and mental wellbeing of a child.”

As well as meeting the Duchess, choirs from two of the schools supported by Place2Be performed a song they’d created for the occasion, accompanied by the Royal Philharmonic Orchestra. Per the Evening Standard, the Duchess of Cambridge then wished two of the children a happy birthday and added: "Happy Birthday" is “one of (Prince) Louis’s favourite songs." According to the publication, she then explained that he wasn't at the event as he was “tucked up in bed.”

Place2Be was one of the Duchess of Cambridge's first patronages and, according to MSN, she explained in her speech: “I knew it was special then, but having spent many years since, learning about the importance of childhood development, I see even more the value in the work that you do and I am hugely grateful for all that you have taught me over the past seven years."