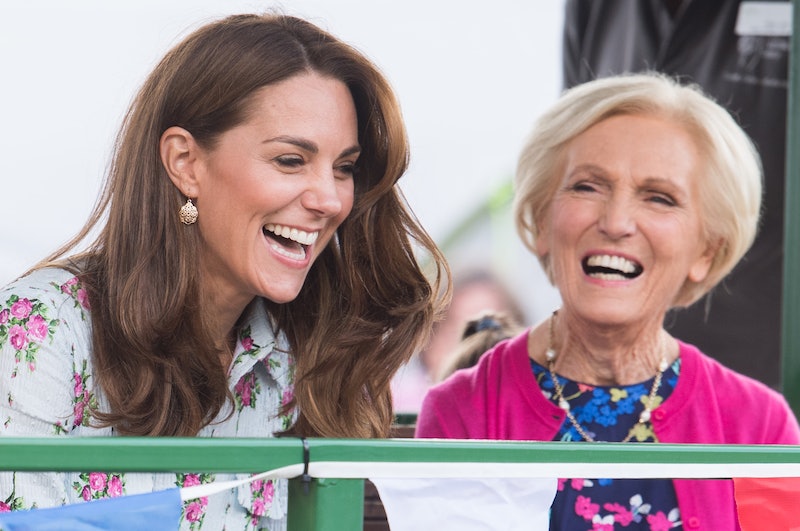 As the UK starts making plans for the festive season, our attention turns to entertainment, as this time of year is guaranteed to bring with it some quality TV that's well worth missing the office Christmas party for. Well, it's recently been announced that Kate, Duchess of Cambridge and Mary Berry will star in a TV show, and it feels like nothing short of a Christmas miracle.

Berry might've left The Great British Bake Off but she's always remained the Queen of the kitchen (and our hearts) and The Sun's report that she will join forces with Kate in a Christmas TV special feels like two royal worlds are merging.

According to The Sun, the TV show has the working title of The Mary Berry Royal Christmas Show. The newspaper says it has already begun filming and will air next month on the BBC.

Speaking about the show, a source told The Mirror, "What better way to spread some Christmas cheer than to team up cookery royalty Mary Berry with real royalty in the form of Kate? Between them they will bring seasonal goodwill to their guests and to the millions of viewers watching. Expect a properly uplifting Christmas treat."

The Mirror has also suggested that the filming is taking place in a "royal venue" and the two will be rewarding charity workers who are on duty over the festive period.

I have reached out to Berry's agent to see whether they have any comment on this story, and will let you know if I hear anything back.

Kate and Berry might seem like an unlikely pairing but it looks like the two have developed a friendship after meeting back in 2013 at a Child Bereavement UK event, as Marie Claire reports. The two were recently seen together at the opening of Kate's garden at RHS Wisley in Surrey.

The show could be pretty entertaining because Kate and William have both previously joked about Kate's cooking. At a gala in 2016 Kate said "William has to put up with my cooking most of the time," and William replied, "It's the reason I'm so skinny." Maybe she'll learn a thing or two from Berry. The BBC haven't yet released an air date for the program, so we'll have to keep out eyes peeled because it sounds like this won't be one to miss.