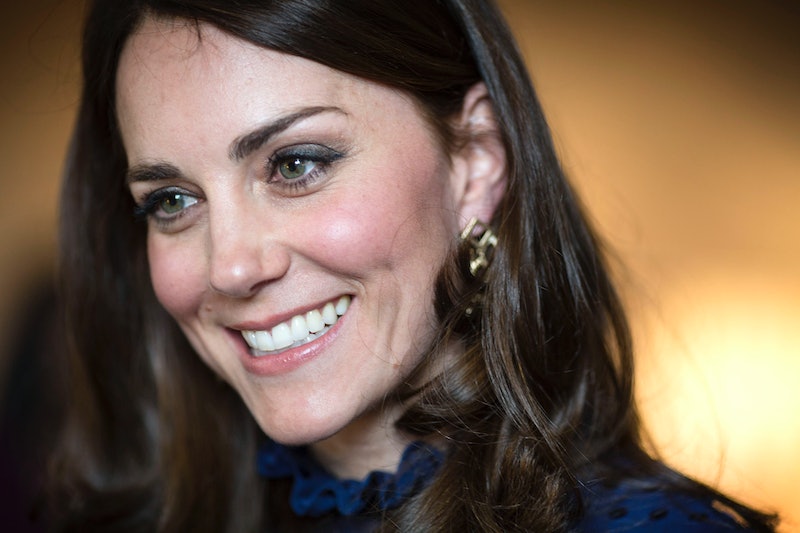 Sometimes it can seem like the plot of Kate Middleton's public life is straight out of a Lifetime movie — thankfully, minus the cheese. And few things give folks that warm, comfort-movie feeling more than seeing Middleton wearing Princess Diana's favorite tiara, which the Duchess of Cambridge recently donned for a state banquet.

Though Middleton hasn't worn tiaras very often since marrying Prince William, she has worn them to palace events before. This time, the event was a July 12 party in honor of King Felipe and Queen Letizia of Spain, and Middleton obviously decided to take her wardrobe classically royal for the couple's visit.

The Lover's Knot tiara, also called the Cambridge Lover's Knot, was a wedding gift from Queen Elizabeth to Princess Diana. While it's of course most famously known as Princess Diana's favorite, the crown has a long and storied history within the royal family; it was commissioned by Queen Mary in 1913, and is a replica of a 200-year-old crown that belonged to Princess Augusta, Queen Mary's grandmother.

After Princess Diana divorced then-Prince Charles, she returned the crown to the family. Now, though, it appears her affinity for the pearl-and-diamond tiara is living on in the woman who would have been her daughter-in-law.

Previously, Middleton wore the tiara to a December 2015 event honoring Britain's diplomats, as well as to the same event in 2016. For this recent banquet, she paired the Lover's Knot with a shell-pink Marchesa gown and pearl Collingwood earrings, which also belonged to Princess Diana, PopSugar reported.

Though this is a lovely way to honor the late Princess, Middleton usually skips the crown and jewels in favor of (still memorable!) ensembles, like her incredible forest-green Christmas 2015 look and her classy red and white custom Alexander McQueen dress, which she wore on her 2016 tour through Canada.

It's hard to imagine being a princess and not regularly raiding the royal closet, and there's a good reason — all of the pieces, jewelry and clothes alike, are totally gorgeous. Fans can currently see some of Princess Diana's most iconic dresses on display at her former home, Kensington Palace. The exhibition, "Diana: Her Fashion Story," runs until February 2018.

While Middleton likely won't be wearing any of Princess Diana's dresses, there's definitely a good chance she'll be wearing the Lover's Knot again — and that she'll be looking just as stylish next time she does.