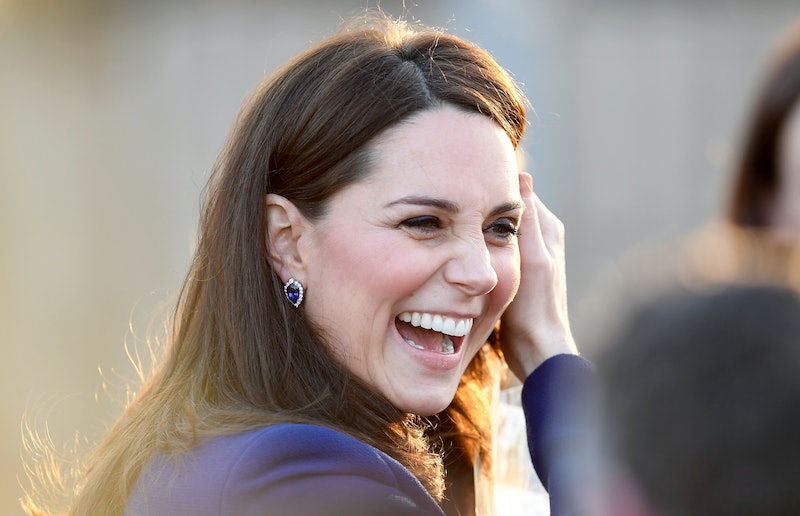 When it comes to the monarchy, there's an expectation for the royal family to be flawless. From the polished and curated image that they share, to the long list of royal rules of decorum, there's a lot of pressure to look seemingly perfect around the clock. For example, some of the official rules get so nitty-gritty that they dictate what kind of nail polish the women could wear (only neutrals, and Queen Elizabeth has been wearing the same powder pink shade from Essie since 1989,) and how they're allowed to sit (with their ankles always crossed and with an egg-sized gap between their back and the chair.) Suffice it to say, it's intense. But every now and then a moment happens where you're reminded that, while they're royals and will be written about in history books, they're also human. That's why people loved that Kate Middleton's heel got stuck in a metal grate — it made her just like us for one moment.

We normal plebs might not have a solid gold carriage to ride in or a closet full of inherited museum-quality diamonds and jewels, but anyone who has ever worn heels has had an unfortunate stiletto-related incident at least once in their life, and one of such incidents is getting your heel stuck in a grate and having to struggle to pull it free for a hot minute.

On Feb. 7, Middleton visited an Action on Addiction treatment center that she was opening in Essex, only to have her stiletto give her some trouble upon arrival. The Vice Lord Lieutenant of Essex Jonathan Douglas-Hughes was there to greet her when it happened, and he laughed it off seeing how he had a bit of a moment himself when he first met the duchess in 2016. Only he slipped and fell over when he first met her.

"I reminded her [about the fall]," the Vice Lord told the Daily Mail. "My wife told her that she would ensure I didn't do it again. Then she caught her heel. She said 'oh... [I've done] the same as you!'" It's pretty cool the duchess was so laid-back and not embarrassed about the whole ordeal, getting through it with poise.

This also isn't the first time that she got stuck in a grate, making her even more relatable. If your day is jam-packed with meetings, events, and functions all day long, and you're running to most of them in stilettos, it's only normal that you'll have a few pump-related incidents every now and then. And the fact that the duchess's mishaps are five years apart is downright impressive.

In 2013, Middleton got her heel stuck in a grate during St. Patrick's Day while she was walking in the parade. Even more normal, her husband stood next to her, giggling while a soldier stood still in salute as she bent over to wrestle it out. She handled it in the same exact way as she did this week, smiling and moving on with the show with perfect grace.

While her heels gave her some trouble this week, you have to admire how gorgeous they were. Her black suede pumps matched the rest of her outfit beautifully, regardless of their habit to get stuck in small places. She paired them with a bright, sapphire blue coat from the brand Goat, a British luxury cashmere designer fashion label, which has a funnel collar and bow detailing at the side of the neck to give it a feminine flourish.

The blue coat went perfectly with her sapphire engagement ring, and she rounded it off with a small black clutch, presumably so she wouldn't have to shake too many people's hands.

But the lesson from this story is simple: A royal or a normal, heels don't discriminate when it comes to mishaps.