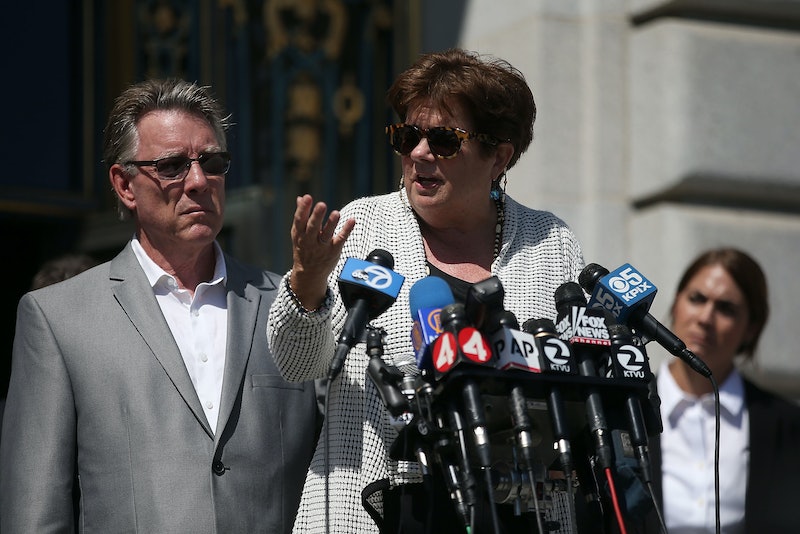 The family of Kate Steinle, a young woman who was murdered on a San Francisco pier, have found themselves at the center of American immigration policy. "Kate's Law," a bill that would strengthen penalties for criminals convicted of crimes and deported who then re-enter the United States illegally, was named after Steinle; the House passed the bill last month. Now, Kate Steinle's wants politicians to leave his daughter out of it.

Steinle's alleged killer, Juan Francisco Lopez-Sanchez — who will be tried for second-degree murder in the case after pleading not guilty — had been deported five times, spent time in federal prison for entering the country illegally, and was set to be deported again before San Francisco released him. Steinle's family became active advocates of legislation that would prevent a similar crime from being committed.

In a Senate hearing in 2015, Steinle's father, Jim, said, "Our family realized the complexity of immigration laws. However, we feel strongly that some legislation should be discussed, enacted or changed to take these undocumented felons off our streets for good." He said the family would be "proud to see Kate's name associated to some of this new legislation."

Now, this seems to have changed. Jim spoke with columnist John Diaz at the San Francisco Chronicle and explained that he wants his daughter taken out of the equation in the argument on immigration so that they may grieve. "I don't know who coined 'Kate's Law,'" Jim told Diaz; "It certainly wasn't us."

This doesn't mean that their views on the law — or connected issues, like sanctuary cities — have changed. They support the law now, just with a different name, and they have never been opposed to sanctuary cities, Diaz writes.

Their change in positioning on the title of the bill could have to do with the rise of Trump and how the bill has grown to be a contentious matter in the political debate, tied to sanctuary city legislation and a general crackdown by the Trump administration on immigrants living without papers in the United States.

Trump has been talking about Steinle's death since he first announced his candidacy, bringing up her story at rallies across the country, something that has previously angered Steinle's brother, Brad.

Brad spoke out against Trump's position in an interview with Anderson Cooper as early as July 2015, accusing the then-nominee of sensationalizing his sister's death:

The contents of "Kate's Law" would still be workable for Jim Steinle, according to the Chronicle; it's just Kate's name that needs to go from it.