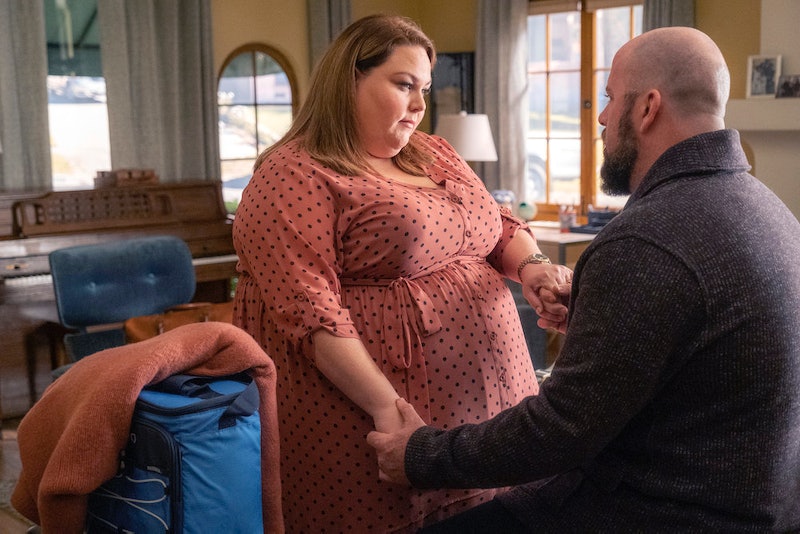 If there's one thing that Pearsons are known for doing, it's standing by their loved ones in times of need. This includes their spouses, which is why Kate and Toby's marriage on This Is Us may not be in quite as much jeopardy as the show wants us all to think. Ever since the Season 3 flash-forward showed an older Toby, who wasn't wearing his wedding ring, and Kate was nowhere to be found, fans have grown concerned with the fate of their relationship, fearing that all signs point to them getting a divorce. However, there is still hope that this lovable duo could still get the happy ending they deserve with each other. And, ironically, the proof is in yet another flash-forward.

On the outside, admittedly things don't look great for Toby and Kate's future. In the flash-forward where Randall calls Toby, he's shown to be in bed all alone (sans wedding ring) and uncertain if he'd even be wanted at the upcoming Pearson gathering. That certainly makes it sound like he and Kate are on rough terms, if not completely separated. The past couple episodes also show their marriage deteriorating — in the wake of Jack's diagnosis, Toby appears to be pulling farther and farther away from Kate.

But there are still a lot of missing pieces to that puzzle, so it's important not to instantly jump to any conclusions. After all, that's what the This Is Us writers want us to do, which most likely indicates this will all turn out to be a red herring. Because, despite Kate's absence from the setting, the adult version of their son Jack should signify to viewers that not all hope is lost.

In the Season 4 premiere, fans were introduced to another flash-forward that centered around Kate and Toby's fully-grown son, Jack, played by Blake Stadnik. Throughout the episode, snippets of Jack's life were revealed, including how he met, wooed, and fell in love with his current wife. Meeting her even helped inspire him to write a hit song that he performed in front of a huge stadium of people.

Clearly, Jack is a romantic at heart, much like his dad and Grandpa Jack after whom he was named. And while it's possible that he was simply born with that same romantic gene both of those men possessed, it's also just as possible that he learned that charm and passion through example, by watching his own parents' marriage throughout the years.

Being a child of divorce can greatly impact your future dating life and how you approach a possible relationship. Yet Jack seemed very open to falling for Lucy right from the start and seemed unafraid of where things could go. It may not guarantee that Kate and Toby's marriage is able to overcome their struggles, but it definitely bodes well for their odds.

More like this
Here’s What Happens To Bill & Frank In 'The Last Of Us' Video Game
By Brad Witter
'The Queen’s Gambit' Season 2 Tweet Wasn’t From Anya Taylor-Joy
By Mary Kate McGrath, Jack Irvin and Grace Wehniainen
Ashton Kutcher Wants Danny Masterson “To Be Found Innocent” In Rape Retrial
By Jake Viswanath
Pamela Anderson's Sons Brandon & Dylan Have Their Own Hollywood Careers
By Arya Roshanian
Get Even More From Bustle — Sign Up For The Newsletter
From hair trends to relationship advice, our daily newsletter has everything you need to sound like a person who’s on TikTok, even if you aren’t.