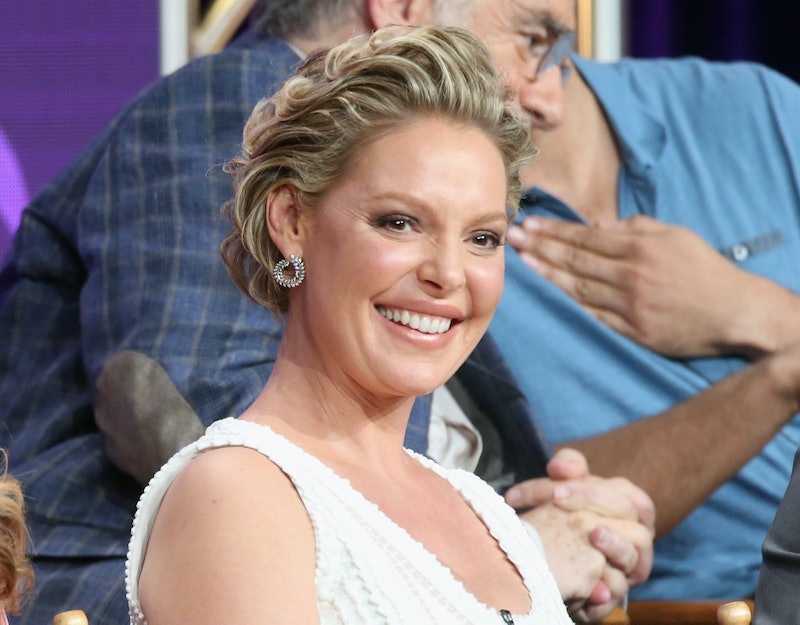 Always the bridesmaid, never the bride — unless, of course, the star of one iconic romantic comedy finds a way to update 27 Dresses for 2019. During a recent cast reunion for Entertainment Weekly, star Katherine Heigl revealed she'd love to make a 27 Dresses sequel and she already has plenty of ideas.

"I want to do a sequel," Heigl told EW about the possibility of stepping into Jane's bridesmaid dresses once again. "I think it would be awesome to see what are their lives like 10 years later? Do they end up together? I personally think they did, Heigl said, referring to Malin Ackerman and Edward Burns' characters, who fall in love and enjoy a whirlwind romance in 27 Dresses.

And the actress has even come up with a way to update Jane and sister Tess' relationship for a new film, now that they would be married women. "I think [Tess and George] have, like, three kids," Heigl said. "She’s made Jane the godmother every time, so Jane has to plan the christenings and the baby showers and the gender-reveal parties, but then all the other bridesmaids [also] make her the godmother."

But unfortunately, the "happily ever after" doesn't quite extend to Jane and her husband Kevin (James Marsden). "We can’t get pregnant," she suggested.

But while Heigl has the entire plot all mapped out — and maintains that the film's director, Anne Fletcher, is on board with the plan — the actress also confessed that she isn't sure that the cast and crew would ever be able to make a 27 Dresses sequel a reality. "Unfortunately," Heigl explained to EW, "we can't quite get the rights."

Still, the cast seemed to be incredibly enthusiastic about the possibility of revisiting the world of 27 Dresses once more, as Marsden explained that they are all thrilled by the love fans have for the movie, even 11 years later. "I don’t think anybody ever knows when you’re filming something that’s going to stand the test of time," Marsden said. "I think there’s a sincerity to the movie that gives it legs."

The Westworld actor also revealed that he's frequently asked to recreate the scene where Kevin and Jane sing Elton John's "Bennie and the Jets" while stranded at a dive bar. Though the adorable impromptu karaoke moment quickly became a fan favorite, screenwriter Aline Brosh McKenna told EW that the studio wanted her to change the song that soundtracks that pivotal moment

The pair's adorable singalong instantly became one of the film's most unforgettable moments — although, for Heigl, there's something else that stands out in her mind when she thinks back on 27 Dresses. When asked by PeopleTV what her least favorite bridesmaid dress was, the actress explained, "There's one that always pops into my mind, and it was a little, short yellow ruffly dress with a pink sash. So that's always the one I pick, and it's not even the worst of them, but for some reason, that's the one that always pops into my mind."

And while she might have plenty of fond memories of making 27 Dresses, Heigl did admit that she didn't keep any souvenirs from set. "I didn't 'get' to keep them," she joked about the film's collection of hideous dresses. Maybe if she and director Anne Fletcher manage to actually get a 27 Dresses sequel made, Heigl will be able to find a much more flattering costume to steal from the set.