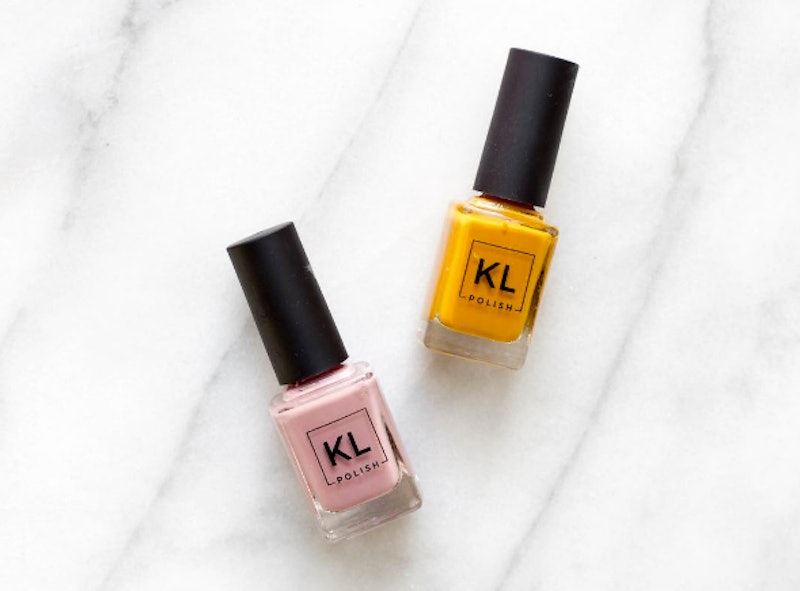 It's only been a little over a month since Kathleen Fuentes, aka KathleenLights, launched KL Polish, but she's already in the process of expanding. According to a recent video on the YouTuber's channel, KL Polish is getting a matte top coat. Fans have been asking for the item since the line launched, and Fuentes is a fan of the product herself. Basically, it makes completely sense that a top coat would be next for the brand.

Fuentes' nail polish line was one of the most anticipated launches of 2016. She had been dropping hints throughout the year, before finally rolling out long-wearing colors in early Dec. So far she has six shades available — Zoey, Brick Sidewalk, Caramello, Snickerdoodle, Gumption!, and Chocolate & Broccoli. The pre-sale sold out quickly, but as of Jan. 17 at 3 p.m. ET, all the colors are up for grabs on the KL Polish site.

It looks like Fuentes has plenty more in the works as well. She already mentioned in a press release that she'll be launching something special for her birthday. Now, in her recent YouTube video, she announced that she's working on a matte top coat as well. It makes sense considering that Fuentes is all about the nail trends.

Fuentes is constantly asking her fans for feedback on Twitter. When she tweeted out a question asking what her fans want to see next, tons of people said a matte top coat. They also said they'd like to see a normal top coat as well, so this could mean that both are coming to the site sometime soon.

She didn't give an exact date that the top coat would come out, but it's still pretty exciting news. Personally, I love that she's expanding her brand so quickly. When it comes to nail polish shades and tools, it's the more the merrier!

Bottom line: keep your eyes peeled, people. You never know when another social media clue is going to come out! Here's the video so you can see for yourself.