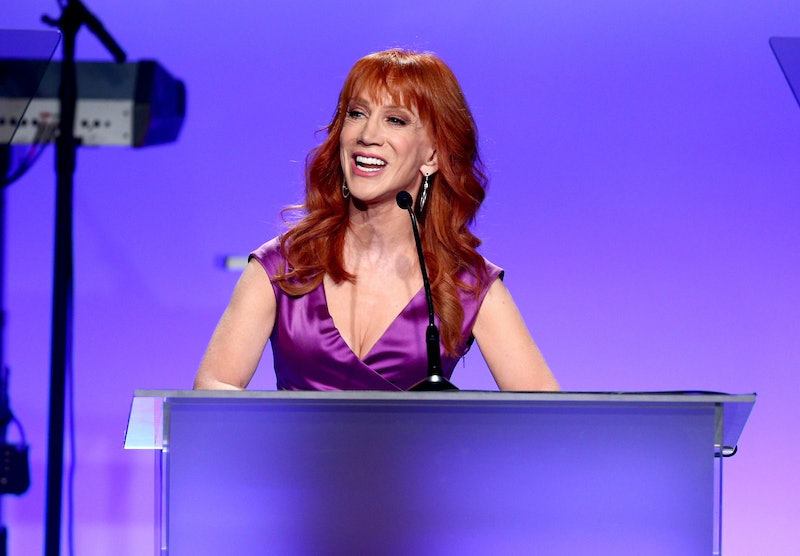 It's been a whirlwind week for comedian Kathy Griffin, and not in a good way. First came the release of her wildly controversial, gory photo shoot showing her holding Donald Trump's severed head. Then came her firing from CNN's annual New Year's Eve program, a gig she's had for the last 10 years. Now, Griffin has hired a lawyer in response to the backlash — and to call attention to the Trumps' "bullying."

Griffin hired attorney Lisa Bloom, the same woman who represented more than one of Trump's sexual assault accusers during the presidential campaign, and a high-profile advocate for progressive legal causes. This, needless to say, is not an issue strictly of politics, but of the intersection between the politics and entertainment worlds.

In a statement released on Thursday, Bloom acknowledged that Griffin had hired her, and said the 56-year-old comedian will discuss "the true motivation behind the image."

Earlier this week, Ms. Griffin released a controversial photograph of herself posing with a faux-bloody mask of Donald Trump's face. Ms. Griffin and Ms. Bloom will explain the true motivation behind the image, and respond to the bullying from the Trump family she has endured.

This might strike you as strange ― after all, on what grounds can Griffin complain about being bullied by the Trump family after releasing a lurid photo of her hoisting the president's severed head? The answer likely lies in a handful of responses to the controversy from the Trump clan, specifically Melania, Donald, and Donald Jr.

As embedded above, the president tweeted that Griffin should be "ashamed of herself," and concluded by calling her "sick." The "sick" part is similar to what he said of President Obama while falsely accusing him of wiretapping Trump Tower prior to the 2016 election. Similarly, Donald Jr. blasted Griffin, and leaned on CNN to fire her.

Donald Jr. tweeted several more times about the controversy, also condemning Minnesota Senator Al Franken's scheduled event with Griffin, an appearance that has since been canceled. Melania, for her part, didn't go the Twitter route, instead releasing a statement which called Griffin's mental health into question:

Melania's casual, unqualified questioning of Griffin's mental health is notable, because her own husband has been the subject of a lot of similar speculation through his time in public life. Trying to diagnose someone's mental condition from afar, with not even a shred of relevant training, regardless of what you think of that person, is an inappropriate and stigmatizing practice.

In any case, Melania and the Trump clan now really can't complain about that kind of behavior without facing allegations of hypocrisy. Bloom and Griffin have not yet specified what if any legal action will be involved, but a statement from the pair is set to be delivered on Friday morning.