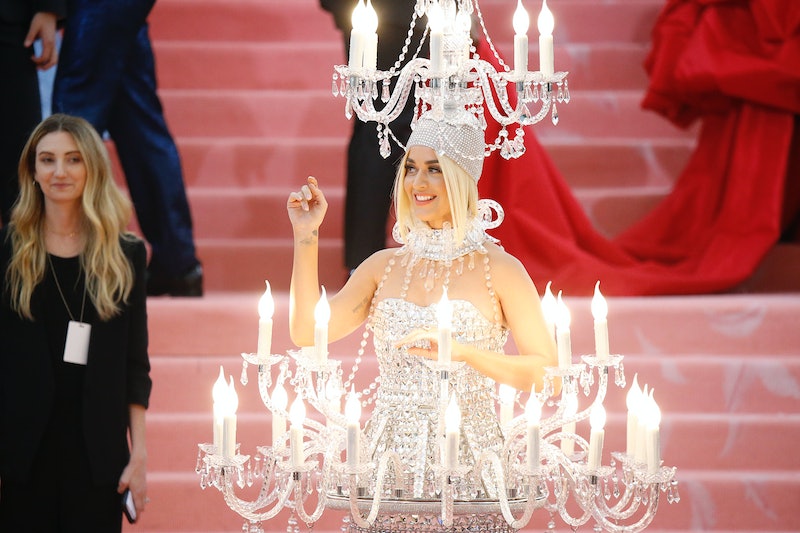 Forget fast fashion. Katy Perry is ushering in a new era of fast food fashion and beyond. Katy Perry's 2019 Met Gala dresses were random inanimate objects. Early in the evening, Perry walked the pink carpet in an epic, fully functioning chandelier dress that actually lit up and looked incredibly difficult to walk in. Quick — someone cue the Sia song! Perry's 40-pound Moschino chandelier dress and headpiece were dripping with Swarovski crystals, from the collar to the bodice. The silver frock was as stunning as it was impractical.

But when Perry changed clothes, she didn't slip into something a little more comfortable like sweatpants. Not. Even. Close. Rather, she continued to respectfully adhere to the event's "Camp: Notes on Fashion" theme by wearing a Jeremy Scott-designed hamburger dress that was gloriously extra.

Perry brought the camp in spades with both of her 2019 Met Gala looks. The American Idol judge's interpretation of the camp theme was totally Katy-centric kitsch.

She certainly looked like a work of art in her first ensemble and was utterly playful in her second, which could easily pull double duty as a Halloween costume or one of her stage outfits.

The singer made chandelier couture her own and earned a gold (or silver) star for being able to navigate the Met Gala's intimidating and tall staircase in a super (top) heavy design.

Katy Perry ultimately served as a beacon of light at the 2019 Met Gala. Let Katy light the way.

Perry also served up a lewk with her burger outfit. According to the press materials received by Bustle, Perry's second dress was Moschino's satin 3D Hamburger jack, complete with with crystalline sesame seeds and worn over a green satin Lettuce dress.

The singer's head popped out of the top of the bun, and she rocked the same platinum blonde, chin length bob. Her hamburger, uh, dress, had all of the fixins, from pickles to tomatoes. The outfit also boasted a toothpick hat, since many bite-sized sliders and sandwiches are held together by such. Her glittery, backless shoes wholly matched the dress. Perry and her glam squad truly considered all of the details.

One can't help but wonder if it was easier for Perry to get around in her burger attire than it was in her chandelier costume. Both looked pretty tricky.

Perry wasn't the sole celebrity to be a fashion quick change artist at this year's Met Gala. Lady Gaga wore four different looks at the same time, and shed one after the other as she opened the red carpet.

This wasn't the first time that Perry rocked burger-inspired fashion, either. She actually crushed this plush footwear while on tour a few years back. Her flatforms looked super comfy and cushion-like.

Perry often looks to food for fashion inspiration when it comes to her performance outfits. She has worn plenty of candy costumes on stage and even rocked a Hershey's Kiss top while covering Rolling Stone.

For Katy Perry, inspo is everywhere and anywhere, especially on your ceiling, atop your table, and in your fridge.