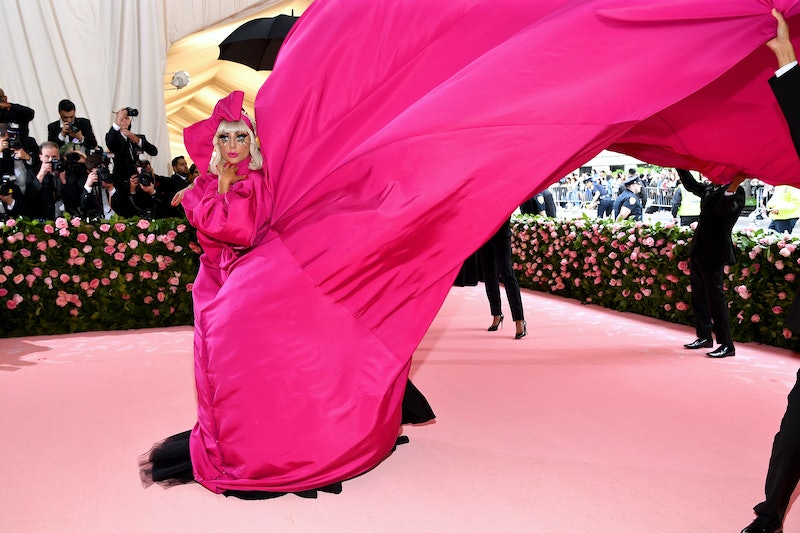 While you may be thinking that it'll be hard for anyone to top Rihanna's plethora of famous Met Gala looks, why not look at the event's wardrobe choices as a chance for even more fabulous and daring fashion ensembles? If anyone can achieve similar greatness to Rih, it's Lady Gaga's 2019 Met Gala look. Let's be honest, there doesn't need to be competition for the best look among two women who have different but incredible styles.

Like Rihanna before her, Lady Gaga isn't just an attendee at the 2019 Met Gala. She's actually one of the five hosts, notably sharing the duty with Harry Styles and Serena Williams. The singer, actor, and Oscar winner did not come to play on the 2019 Met Gala red carpet. When has Lady Gaga ever been anything but awe-inspiring on a carpet, anyway?

At the 2019 Met Gala red carpet, Lady Gaga's show-stopping ensemble wasn't just a single look. There were multiple, and they were perfect for the "Camp: Notes on Fashion" theme. While social media was losing their minds over all of the wardrobe reveals, she is one of the hosts of the event so seeing her be extra AF shouldn't be a surprise.

The A Star Is Born actor's multiple outfits were all created by her former stylist-turned-designer Brandon Maxwell (yes, the creator of her infamous meat dress) and has all the volume and excess of camp while also balancing the high-fashion vibes of the gala.

Lady Gaga's dress began as a voluminous and vibrant pink smock dress that led into one of the most epic trains seen on the red carpet since Rihanna's 2015 Guo Pei dress. However, Lady Gaga was far from done presenting her ensemble.

Slowly, Maxwell began to undress Gaga using oversized golden tools to reveal yet another look. The next part of her Camp look was a black, strapless, structural dress with an exaggerated hip complete with an umbrella.

Who finishes with basic black, though? Not Lady Gaga. Her third look was a killer '90s Barbie-esque, spaghetti strap look complete with a brick phone and everything. Her makeup artist and hair stylist even helped her get ready a la the famous doll.

In her final form, Gaga embraced lingerie on the red carpet by stripping off the final gown and rocking a high-waisted pair of fishnets over a sparkling bra and panty set and her somewhat signature black platform boots.

As for her hair look, Lady Gaga was styled by her longtime hairstylist Frederic Aspiras (who was actually on the red carpet with her). Aspiras tells Bustle that the look was a new take on an iconic look of Lady Gaga's, her bow hair. He collaborated with Lady Gaga, designer Brandon Maxwell, as well as Haus of Gaga and used the idea of a classic bob and bow to create the basis for the more campy elements of mini bows through her wavy bob.

Lady Gaga's red carpet look for the 2019 Met Gala is just another in a long line of gorgeous looks she's had this year, though.

First, in January, Lady Gaga appeared on the 2019 Golden Globes red carpet in a stunning periwinkle ball gown with matching blue hair and enough diamonds to buy you a house. The look wasn't just stunning on its own, either. The gown appeared to take inspiration from original A Star Is Born actor Judy Garland.

Then, there was her SAG Awards look later that month where she paired a gorgeous, angelic white gown with some serious goth-inspired beauty. The combination was fabulous.

Of course, it's difficult to forger her Oscars look. While Lady Gaga chose to wear a rather minimalist, black Alexander McQueen gown, there was one major detail about the look that made it stand out. For the event, Gaga actually wore the famed Tiffany diamond from Tiffany & Co. The piece was last worn by actor Audrey Hepburn in promotional images for the classic film Breakfast at Tiffany's.

Given her red carpet appearances in 2019, it's no wonder Lady Gaga's Met Gala looks were so incredible. I think it's safe to say that Lady Gaga totally stole the show.