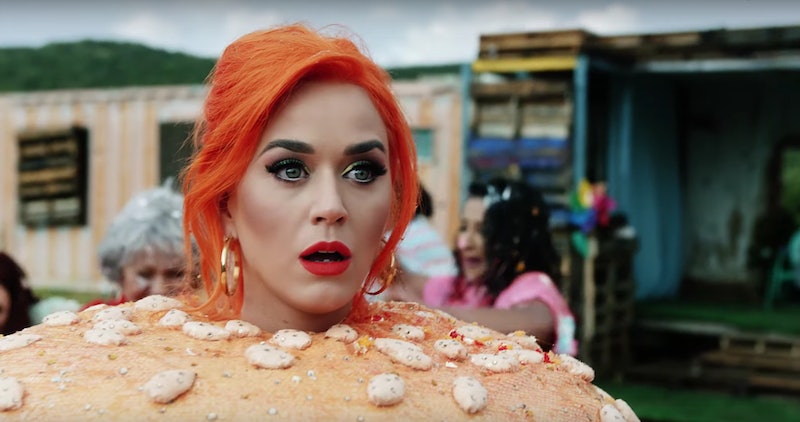 If the teasing Instagram posts and exchanges of olive branches and chocolate chip cookies wasn't enough to convince fans that this celebrity feud was over, then Katy Perry's "You Need To Calm Down" video cameo should finally put any confusion to rest. Perry is just one of many celebrity guests to make an appearance in Taylor Swift's new music video, released on Monday, June 17, but she definitely stands out. And, no, it's not just because she's wearing the giant burger dress from her 2019 Met Gala after party look.

Perry appears towards the end of the music video, right after RuPaul declares no winner in a pop-star themed drag competition, throwing the crown in the air as Swift sings "We all got crowns." The contestants are all in drag as pop stars, including Lady Gaga, Beyonce, Ariana Grande, and even Swift herself, sending the message that the singer isn't in the mood to compete with other women in her field. And that includes Perry, who appears in the middle of a cake fight, all alone, in her burger-dress best. And who should she meet but Swift, dressed in a matching fries outfit! That's right, in "You Need To Calm Down," Perry found the fries to her burger in Swift, and, just like that, all was right in the world.

Perry and Swift, whose feud made headlines starting in 2013 with a dispute regarding backup dancers, have actually been friends for a while now. In May of 2018, Perry sent Swift an olive branch, historically a symbol of peace, to celebrate the beginning of Swift's Reputation Stadium Tour. The "Look What You Made Me Do" singer shared a glimpse of the gift on her Instagram stories, seemingly accepting the truce. Since then, the two have been on good terms — not a diss track in sight. And so when Katy Perry tagged Swift in a photo on Instagram Tuesday, June 11, it wasn't that much of a surprise.

The photo showed what appeared to be a plate of homemade cookies on a plate with "Peace At Last" written on the rim in what appeared to be red icing. (Though, knowing what we know now, it's possible that the red icing was supposed to be reminiscent of ketchup, teasing their burger and fries combo.) At first, fans hoped that Swift and Perry's teasing Instagram meant a collaboration was ahead. After all, both Swift and Perry released new singles this spring, with "ME!" and "Never Really Over," respectively. But, as of now, it looks like they might have just been teasing this music video bonding. That said, there's still hope for a collaboration. After all, based on their interaction in the video, Perry and Swift are definitely more than at "peace" with each other, they're downright buddies, even sharing a burger and fries hug.

Perry posted about this official end to the feud on Instagram story Monday, sharing a photo of the two singers hugging with the message "This meal is BEEF-free." Swift shared the same photo on her Instagram with the caption "A happy meal!"

Needless to say, fans were super excited to see the two artists together, posting reactions on Twitter that ranged from thrilled to full on shook.

And, of course, the reunion had fans already dreaming of their McDonald's orders.